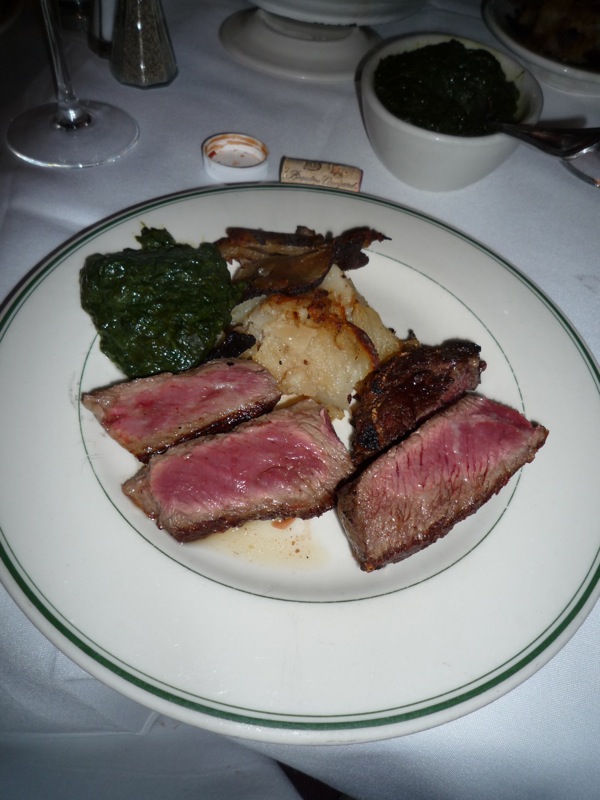 Seth and Tracy are having a baby. They are both freaking a little bit. What better way to ease the nerves of papa-to-be than to confuse his body with copious amounts of steak, Tim’s historical dribble and a few bottles of vino. I’d say mission accomplished.

If you don’t read, this video sums it all up. Look for Wolfgang himself about halfway through. When Tim is explaining the ceiling, Wolfgang is the older man with the white mustache and black suit on the right.

We decided on Wolfgang’s Steakhouse on Park South. Wolfgang’s is owned and operated by Wolfgang Zwiner, the head waiter at Peter Lugar’s for over 20 years. The menu is extremely reminiscent of the famous Peter Lugar’s with a few new options like a Ribeye cut and a few more desserts. After years of Birthday dinners at Lugar’s with Seth we decided to stick to our standard order from the famed house of meat and see how Wolfgang’s compared. We did mix it up a little by throwing in a Ribeye for good measure. I think the best way to explain this meal might be with an excerpt from the email string that followed the morning after. But first lets peek at the food. Tomato and onions. Thick cut bacon. The Steak (pictured up top) on left: 2 pieces of porterhouse. On the right: 2 pieces of Ribeye. The steak was very good. I still go with Lugers. When Lugers is on, there’s no steak better. They have off nights for sure. Sometimes the meat is overcooked. Sometimes it’s not sweet enough. But I have had “Oh My God” moments while eating steak at Lugers and nowhere else. That being said, I actually liked the bacon and tomatos and onions better at Wolfgang’s. The tomatoes alone were terrific. Plump, red, juicy. More often than not, Lugers does not bring the best tomatoes to the table. The sauce is simply Lugers in a different bottle with a different label. Wolfgang’s could have been more original. The creamed spinach and German potatoes can’t even hold a candle to Lugers. Enough said.

I think that meal made me hallucinate last night.

We could go on but I think that sums it up. My take? I think Wolfgang’s is a great steak. Very close to Lugar’s but lacks the old school ambiance, even though it is housed in the old Vanderbilt Hotel. There is just something about being in brooklyn that makes the steak taste a little better and the bacon slip easier down your throat. Although, here is a side by side comparison for those who really want the skinny.