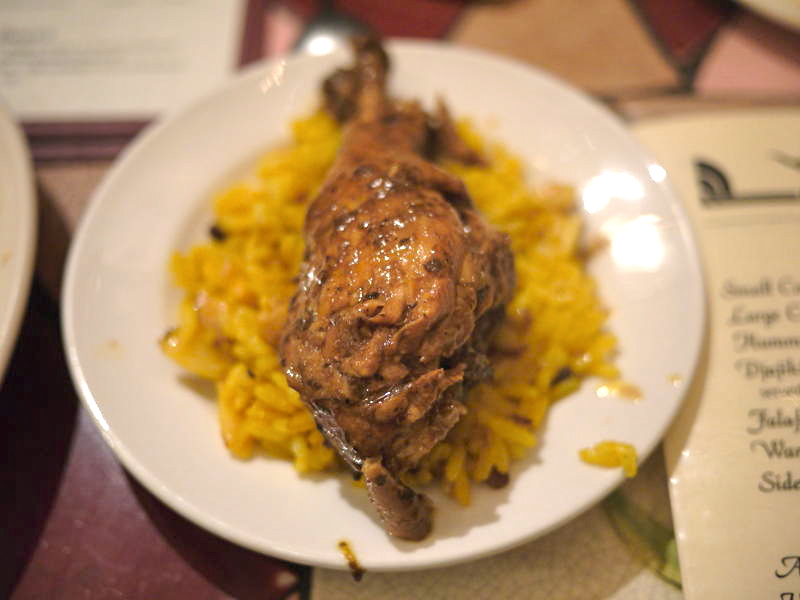 My last good meal in SF this past trip was a treat. The food was delicious but the company made this meal. I was honored to be brought to La Mediterranee by my good friends Ricky and Britt. Their 10 plus year relationship had many Friday nights in this spot and they were now folding me into the La Mediterranee family. As soon as we walked in Arthur came over with a huge hug. Arthur is a 13 year veteran waiter who has much more than food knowledge to impart on his guests. The seemingly customary round of hugs, hellos and here’s-a-menu ended and Arthur asked what bottle we would be drinking tonight. As I learned, a bottle of wine is par for the course when the Montalvos visit. We settled on a nice red and got into the menu. Britt and Ricky didn’t need much time as their favorites were already on Arthur’s pad. I struggled with my appetizer choices. There were so many tasty looking items my brains swirled with indecision. As it often turns out I was having entree decisions as well. What I secretly wanted was two entrees but one of them downsized to an app portion. Arthur noticing my conundrum offered up that very solution once I explained that I could not decide between the two dishes.

Hummus and an Armenian tomato salad hit the table and then the above pomegranate chicken (appetizer portion) appeared. I am a sucker for chicken legs. Lay that on a bed of yellow rice and I am a goner. As I tore into the succulent and sweet sauced leg Arthur hung around to chat beyond the food. As a political science major, Arthur had lots of thoughts on the environment, the government and the conspiracies that swirl around the muddled facts. It turns out he has so much to say that he created a monthly dinner club to discuss that very thing. The conspiracy dinner was born. Arthur went on to explain that topics had run from industrial food habits all the way to 9-11. Along the way he imparted his views on some of these topics as we chewed and swallowed.

As the conversation continued our entrees came out. The below jasmine chicken had a delicious creamy sauce and was served over perfectly cooked rice. A generous dollop of hummus finished off the plate. Arthur finally finished his explanation and knowledge kicking with asking if we wanted another bottle of wine. We declined. Curious we probed him with a few more questions about the dinners as we dipped, scooped and wiped up every last morsel on our plates. I am not sure what was better the conversation or the food. I do know that I will come back for both.