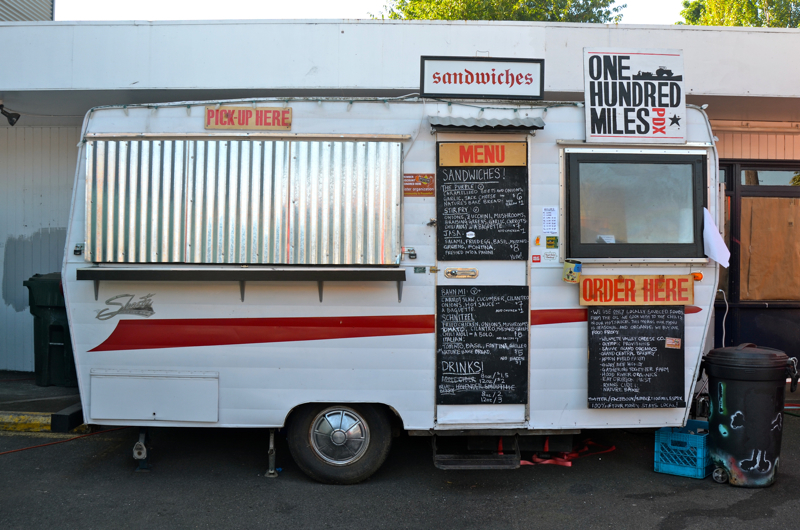 That’s how they like it too. I recently took my first real vacation in over a year since starting Manifold. I was ready for the break and excited about where my wife and I decided to spend it. When asked by Portlanders why I chose their sleepy town as the destination for seemingly such a needed break, my answer was simple. I came to eat.

My last brush with the city of Roses was more than a decade ago. Although it was a 24 hour visit, the vibe and food made a lasting impression. In the years separating that visit and this one, the food culture grew and began to make national noise. Hipsters making artisanal food stuffs in tiny Hawthorne back rooms and new Pearl District restaurants seemed to pop up in publications everywhere I turned. Pictures of these mustache wearing, food tattoo ridden, 1920’s dress sporting, 20 somethings accompanied many of the articles. At the time, I didn’t see the parallels but I was about to discover the Bizarro Brooklyn.

We called the ACE hotel in the Pearl district home for the week. On one of my morning trips do the lobby Stumptown Coffee shop I picked up Portland’s version of the Village Voice, Willamette Week. The cover graphically read “I bird Brooklyn”. As I sat sipping my hand crafted, locally roasted americano I began to read the cover story which began with an except from a New York Observer magazine article comparing Portland and Brooklyn. The Observer article focused on the timing in which the artisan food movement, amongst other artistic trends, popped up in Brooklyn verses it’s growth in Portland. The Willamette author added to the Observer’s perspective by lending his personal insights as a Portland native who recently moved to Brooklyn. He sited Portland as a direct influence on the New Brooklyn. Although, as the article would resolve, the differences between the two are profound.

Coincidentally, the Bite of Oregon Food Festival took place the weekend I arrived. With a little help from my old friend chef Ben Long and my new friend Bjorn Estlund, my wife and I were hooked up for unlimited snacking. The festival was situated on the riverfront with at least four beautiful, post-industrial, bridges in sight. The ends of the festival grounds displayed hundreds of local wines and beers. In the center the food was split up into casual restaurants, chef tastings and food carts. We hit some of the carts first, made our way through a few chef tasting and then, of course, to dessert. Well…double desserts really. One being this lemon vanilla Pie Hole from The Pie Spot. The two best treats were this bratwurst from Mount Angel Sausage Company and the strawberry lemonade cake from Konditorei. Both of these were unknowingly symbolic of the food heros we would conclude the trip with. A quick pass by Voodoo donuts and a late brunch snack of breakfast quesadilla at Mother’s found us retiring to an early mid-afternoon nap. Our first dinner in town, at El Gaucho, sparked a conversation with the hostess. I explained the reason we were in Portland and she was more than excited to talk restaurants and food with us. By the end of our meal she provided us this list of her must taste locations. This was the norm as we came to understand over the next few days. Virtually everyone we struck up a conversation with had a lot to say about what and where to eat. This created a list of “must go” spots longer than we had available meals in Portland. It was not exactly a problem as much as an exercise in good decision making. If I continued to take you through each meal and it’s vibe it would produce an entire gastro-travel guide so, I chose to highlight the best bites of the trip instead. Sitting, for the final time in the window seat of Stumptown the morning we left, I thought about the Willamette article. Reflecting on my morning bicycle ride explorations, the many locals we befriended, the seemingly bottomless cups of perfectly roasted coffee, the impeccable architecture and shop design, the locavore menu creations and the relatively cheap cost of each bite and sip, I realized those profound differences between the cities I mentioned earlier were resoundingly true down to the letter.

The two main distinctions between Portland and Brooklyn are the population and the attitude. By comparison, Portland has 600,000 residents to Brooklyn’s 2.6 million. At face value you can easily deduce there are more people crammed into Brooklyn trying to do the same things then in Portland. In short, more competition therefore more need for differentiation. This quickly leads to the “Hey look at me. I’m soooo different” fashion you find strutting Bedford Avenue.

The second difference, and the defining point of the article, is that Brooklyn is Portland with money and motivation. We can easily blame the Dutch for this as New York was settled for purposes of commerce NOT religion (Boston) or politics (Philadelphia). I digress, New York attitude is notorious but it’s worth analyzing Portland’s attitude related to motivation and money specifically. Several conversations with locals led me to hear the same statement. One cupcake shop employee put it most poignantly by saying, “We all have college degrees but we choose to work in the service industry because it’s easy and gives us more time to have fun.”

I admire this ideology although I personally couldn’t subscribe to it. You all know i need motivation almost as much as oxygen. The money aspect I can relate to a bit more. I have never been highly motivated by money to determine my actions although it’s been a nice bi-product. If we can define money as recognition for “what we do” that would imply Brooklyn strives for notoriety. In Portland being “known” is at the bottom of the list. Their daily actions are driven by making enough money to afford a few craft pints at the bar and enjoying some late night artisan food cart snacks with their friends. If you love Brooklyn but hate the attitude or if you’d just like to vacation in your home town but with less crowded restaurants and friendlier neighbors, take a week in Portland. It’s a bizarro version of what you Brooklynites are used to and frankly a relaxing breath of fresh air. Perhaps I’ll bump into you at Stumptown one morning in the near future. Don’t take the last piece of banana bread. That’s mine.

The Warehouse, The Island & The Turks