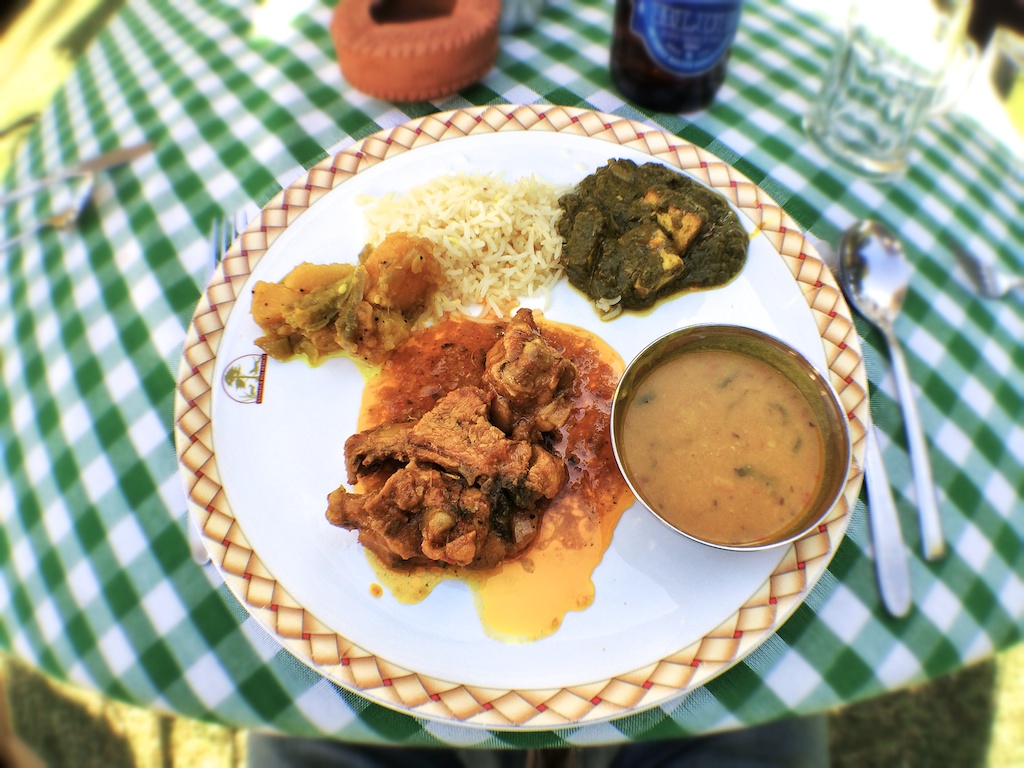 It’s the simple things that stick with me. The perfectly, unfussed, real, things that stick with me the most. It could be many things but meals are those that I remember most. Usually because they link to a bigger memory of an experience I had or a person I met. This is the story of Rafik, our pseudo tour guide and driver from last years India adventure. This story falls in the portion of the trip that is dripping in luxury. Make no judgements. I’ve had plenty of cold shower mornings after waking up in an $8 a night bed and then slinging my backpack over my shoulder to continue the trips nomadic and “gritty” trajectory. This was not one of those weeks. Which doesn’t mean we didn’t get off the beaten path or brush up against the real India. We just did it in a BMW 5 series and a golden tuk tuk. Both driven by Rafik. 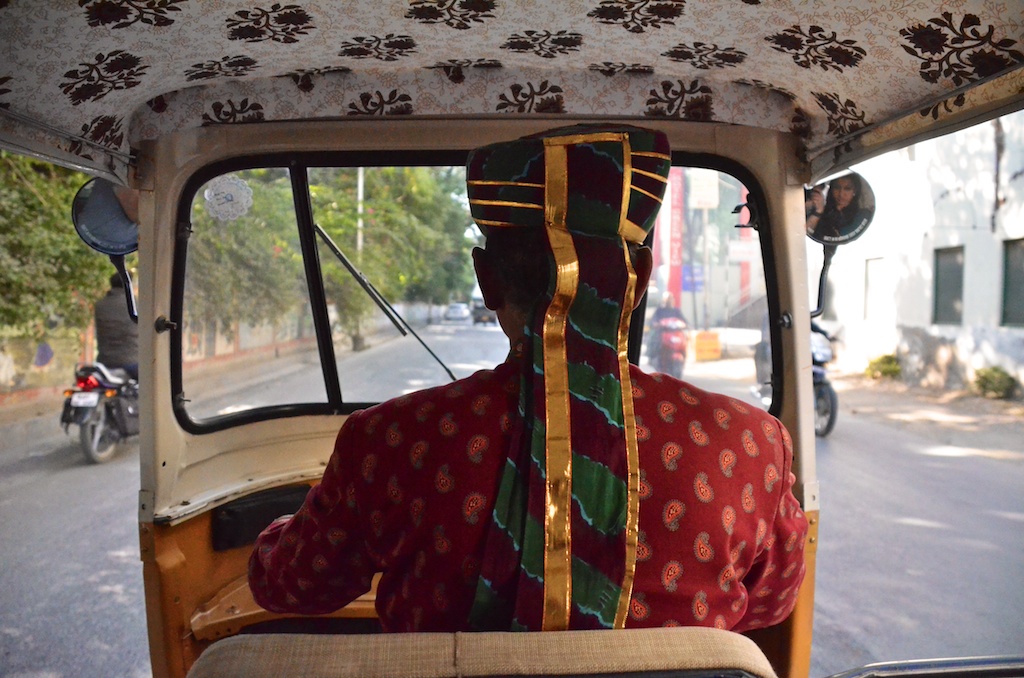 From the time Rafik picked Missus Tasty and I up from the Udaipur airport it seemed he was by our side. Quick side note, this was the most unbelievably ostentatious and doting “welcome” to a hotel I have ever had. Post on this coming soon for sure. The first stop, after a tight ride through the old streets of Udaipur was the majestic City Palace. Rafik drove in silence breaking character only to point out places of interest. 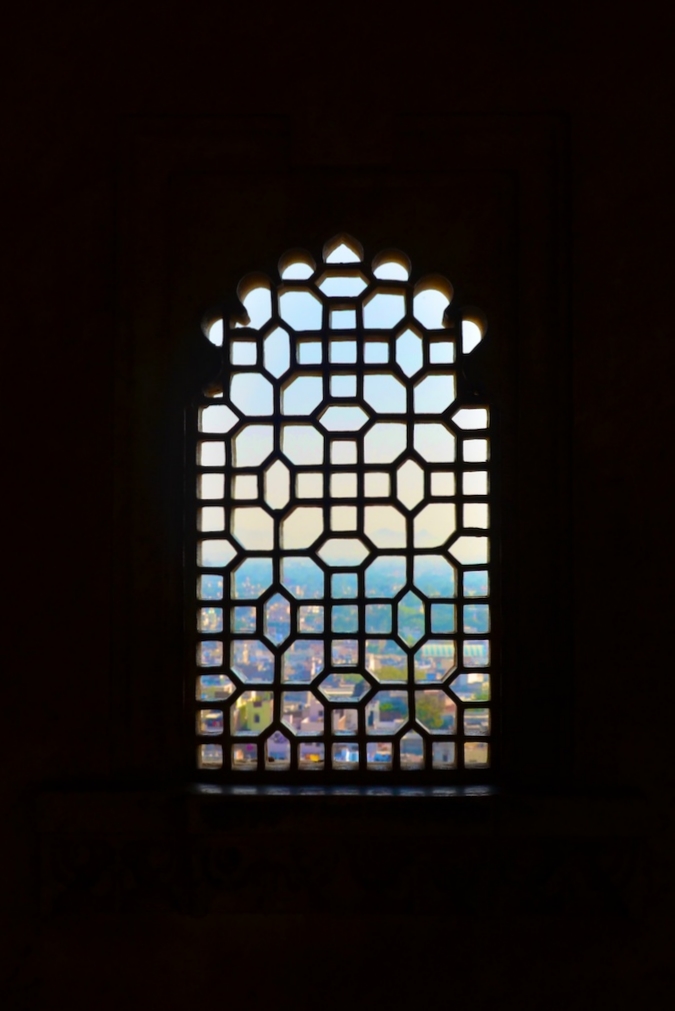 After an hour of exploring the colorful rooms, idols and incredibly detailed architecture we returned to our tuk tuk with Rafik at the ready to take us to our next whim.

Check this image out big.

We spent the rest of the day exploring with Rafik taking us to all parts of Udaipur, touristy and not-at-all touristy. He’d raise his eyebrow when we picked a spot most tourists don’t want to go but always obliged without comment. He soon realized we wanted to see as much real Udaipur as possible.He then started taking us off the beaten path and using side roads to get us to our next destination. Mind you we are still in a gold tuk tuk and he is wearing his “uniform”, a traditional Rajasthan hat and jacket that nobody else in town is wearing. Translation, rich eyesore. Not the way we typically like to get local. 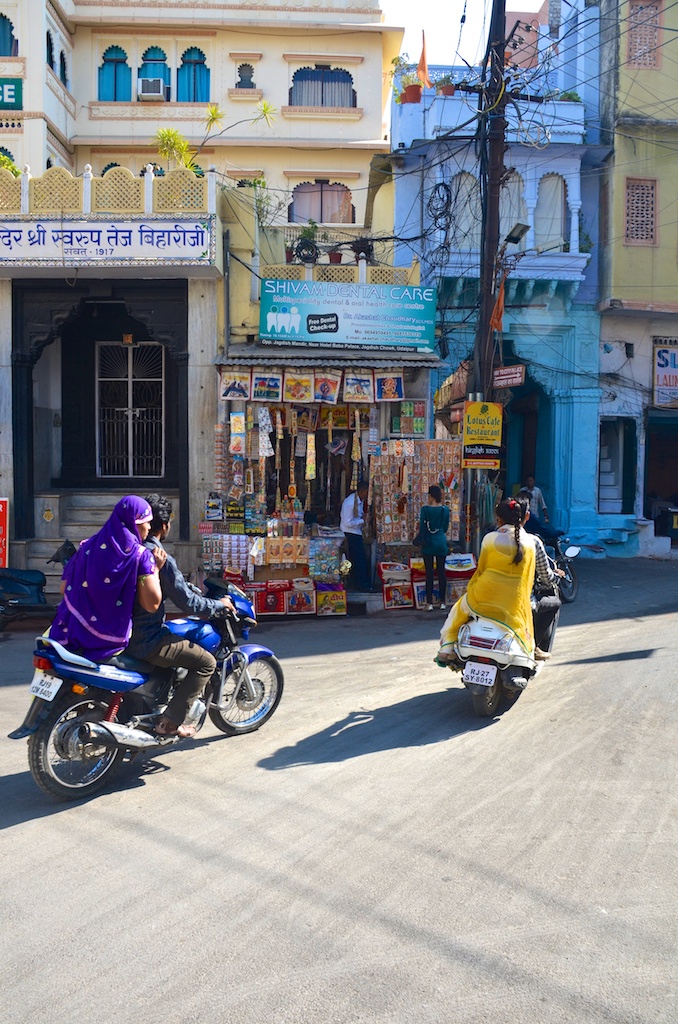 We stopped for some deity cards from a “convenience store” 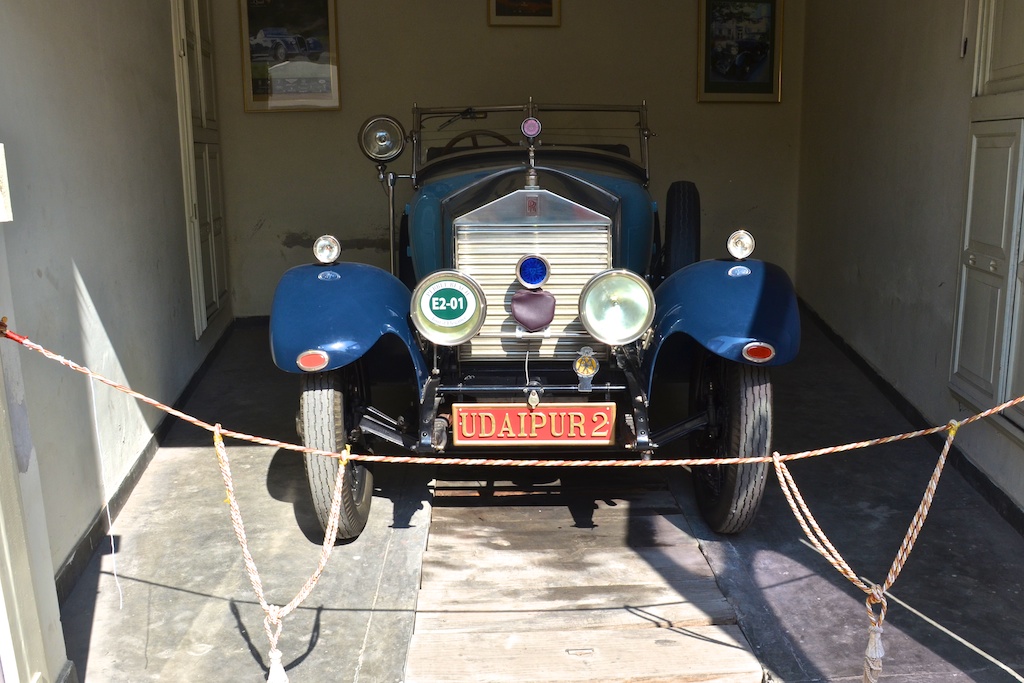 The classic car collection of the Maharaja. 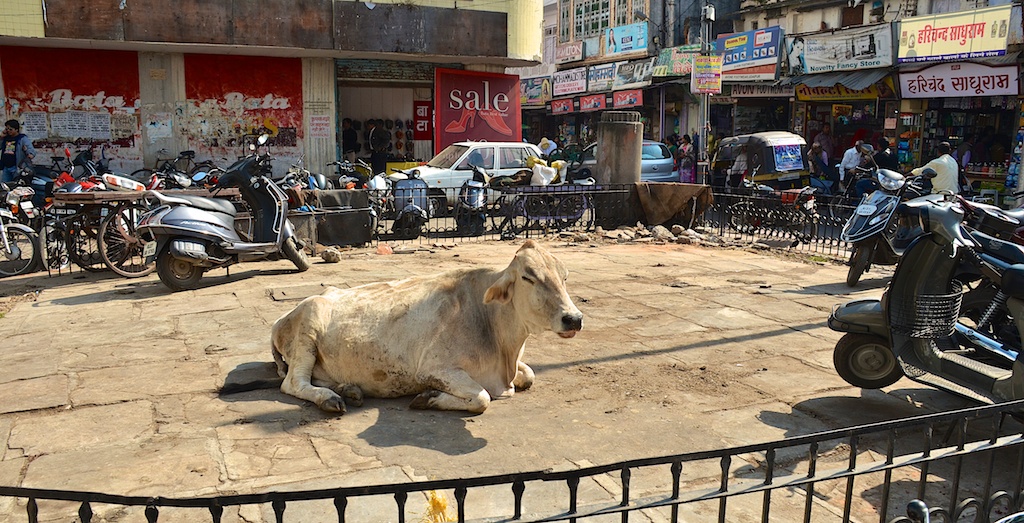 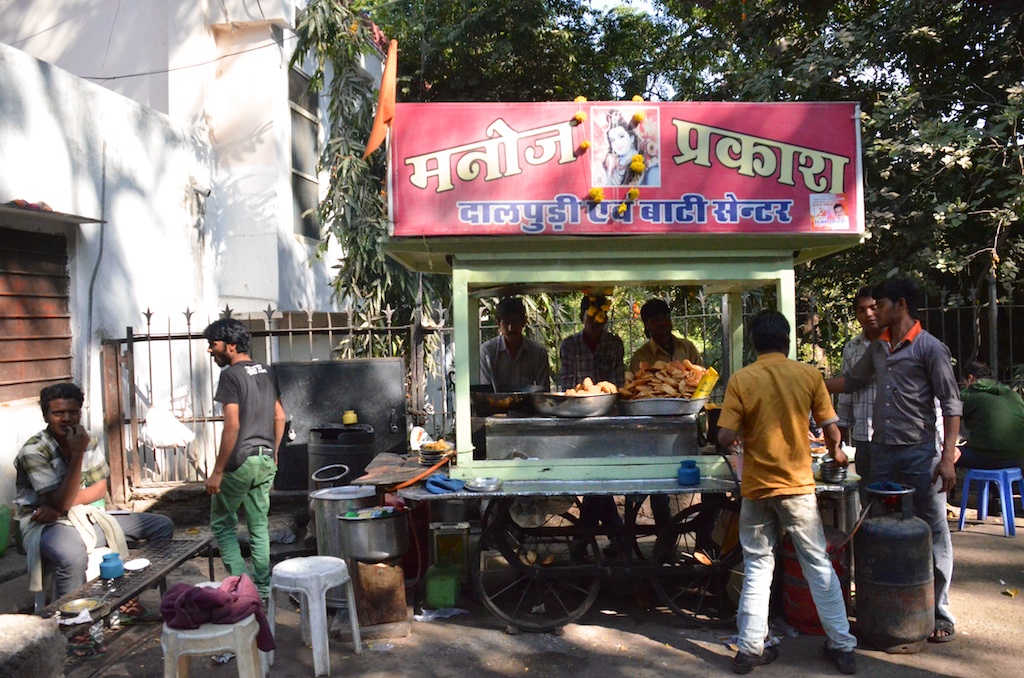 We even popped by some roadside food stands. 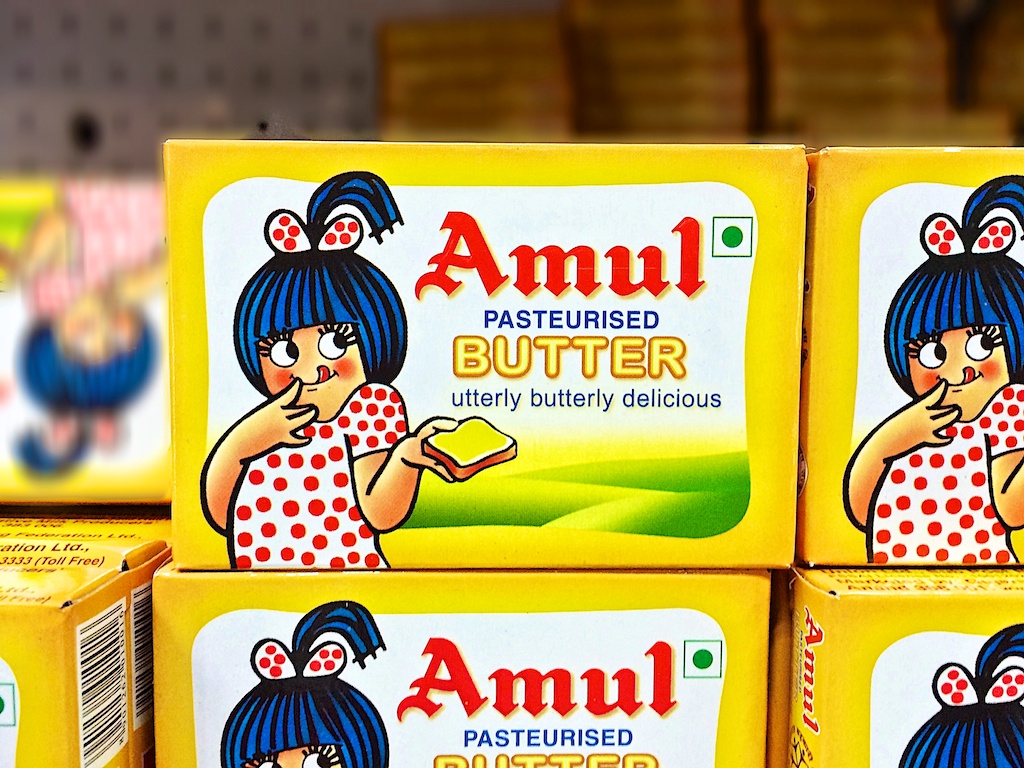 The next day, after we made Rafik stop at Big Bazaar, we travelled out to the Jain Temples in Ranakpur. A journey we were looking forward to not just for the destination but for the places we’d pass in getting there. This is the day we were in the late model, very clean, BMW 535. Rafik knew we stood out like a sore thumb. He also knew we’d push him to repeat the type of stops we insisted on during the previous day in Udaipur. We’d want to stop and explore some less touristy spots. The first of which was this debacle a few men got into when arranging a ceremonial wedding cart. 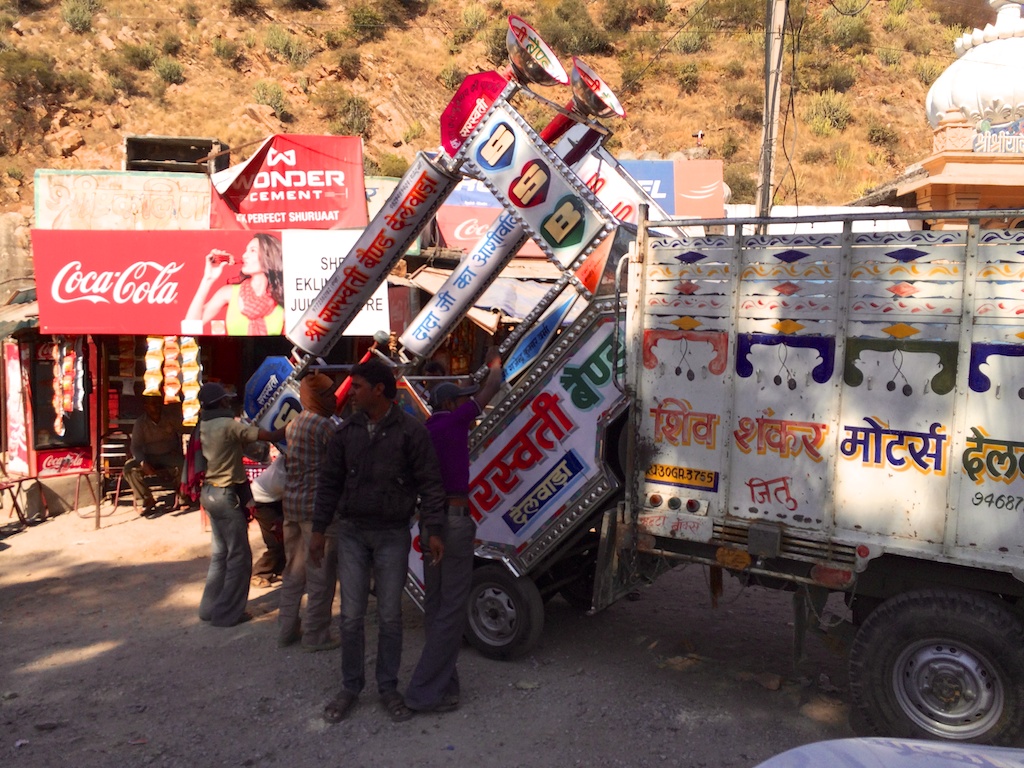 These carts are used in the procession of the bride to alert the town of the nuptials. 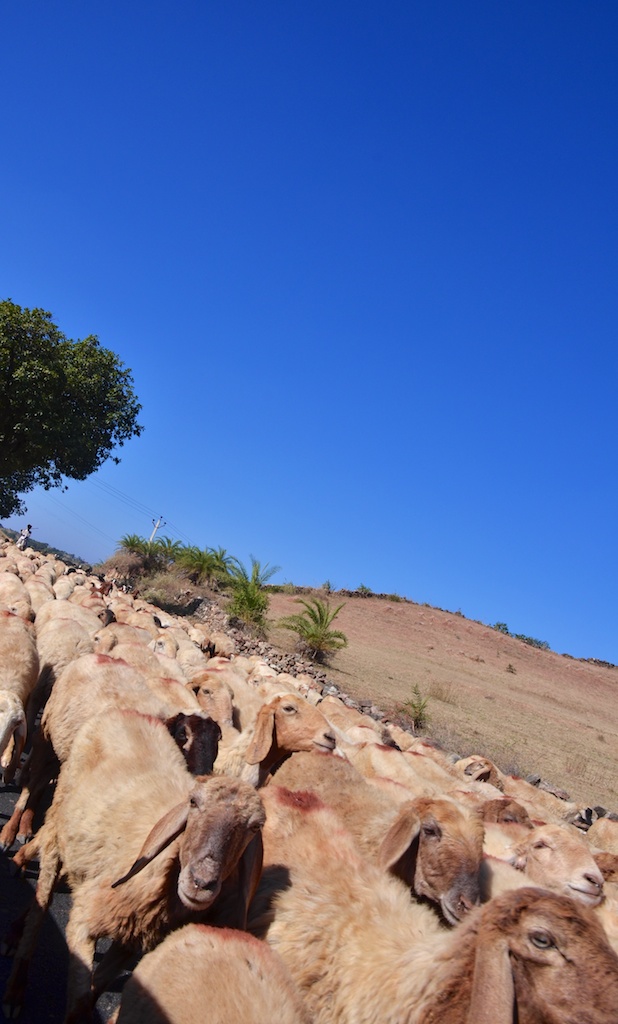 Next was a near collision with a sheep herder and his flock in one of the small mountain towns outside of Ranakpur. 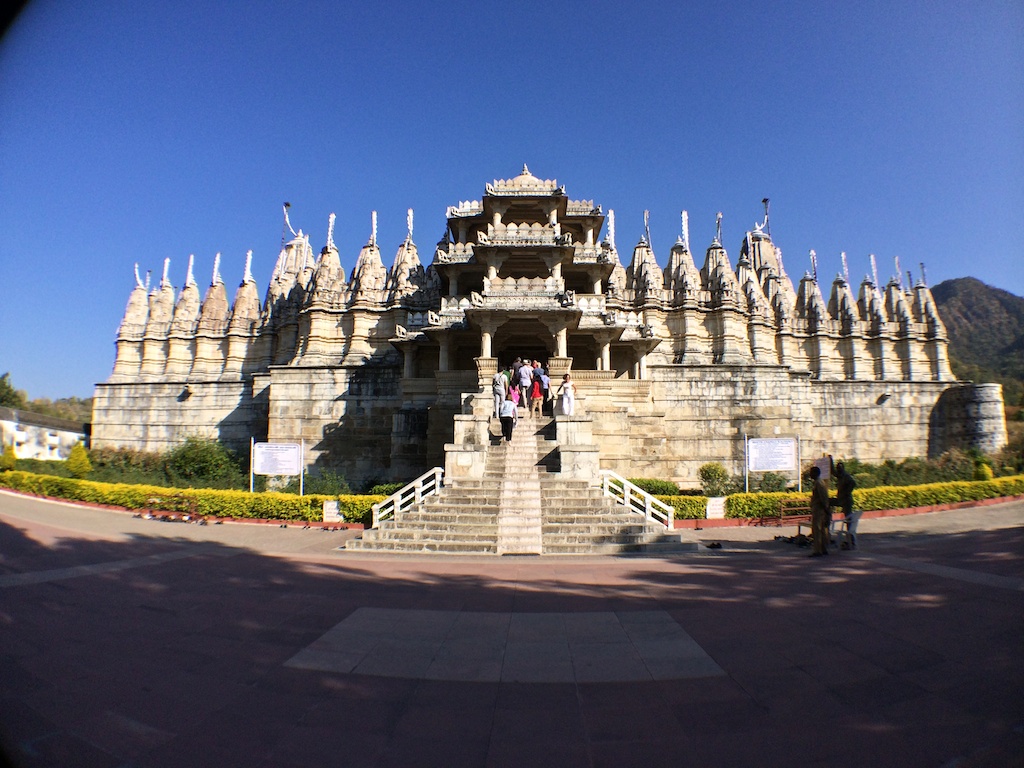 Three hours later, because of all our side stops, we arrived at the temples. 1100 incredibly detailed columns in the main temple commanded much of our attention while Rafik waited patiently by the car.

We were in awe as to how they got all this marble into these remote mountains let alone sculpted it with such detail. Standing in the center room you couldn’t help but gape as you continuously craned your head up a column, across the ceiling and down another meticulously crafted column. You have to see this image BIG.

Back at the car, Rafik was ready for us but it was hot and he had taken his traditional turban, part of his uniform, off. It was the first time we saw him like that and it solidified the “real” Rafik we had come to know in the last two days. He smiled as we approached, waggled his head and said, “Hungry?”. He knew we were ready for food and knew just were to take us. A few miles down the road we pulled off to a small guest house that had a very authentic buffet prepared. (pictured at the top of this post.) Chicken curry, sag paneer, potato curry and some sambar covered all the basis. The simplicity of this food made for one of those meals we search for but can never identify from a guide book or even locals suggestion. You have to stumble into it for some reason but when you’re there you know it instantly. A small lawn with tables and chairs was set up for outdoor dining which we jumped at. 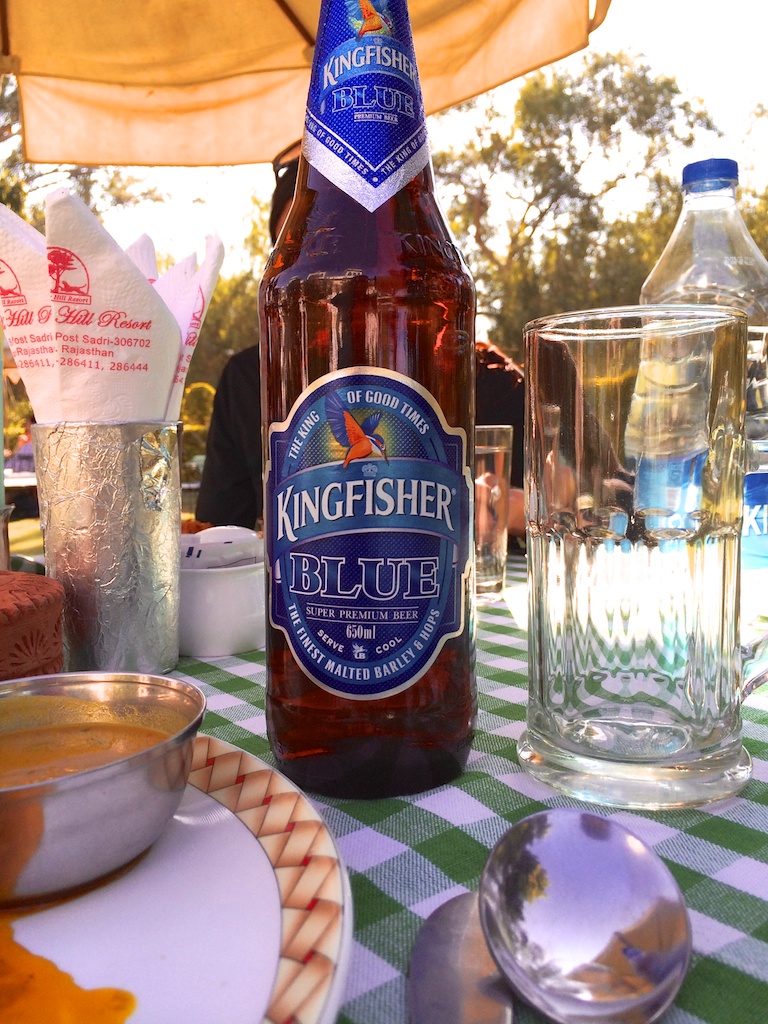 The final move was an ice cold beer. The only fail of the day was not getting Rafik to join us. It’s against the hotel rules, against his job ethic and frankly never even considered by most tourists who are paying $500 a night to stay at a luxury hotel and be chauffeured everywhere in a $65,000 car. He declined multiple times but we knew by his waggle and smile that he appreciated our invitation and wished he could accept. I understand his behavior. He could easily be fired from what is considered a very good job in India. As I mentioned, traveling high end is not always the case for me but no matter what end of the luxury spectrum I am on, getting to know the people who help us explore is critically important to me. I can’t tell you how many “guides” have made their way into my address book over the years. From Phan in Sapa-Vietnam to Fabian in Mendoza-Argentina and now Rafik in Udaipur, all have a coveted spot in my contacts list and my heart. Next trip, I’ll be sure to get Rafik off duty and buy him lunch for sure.

Lunch In A Whore House