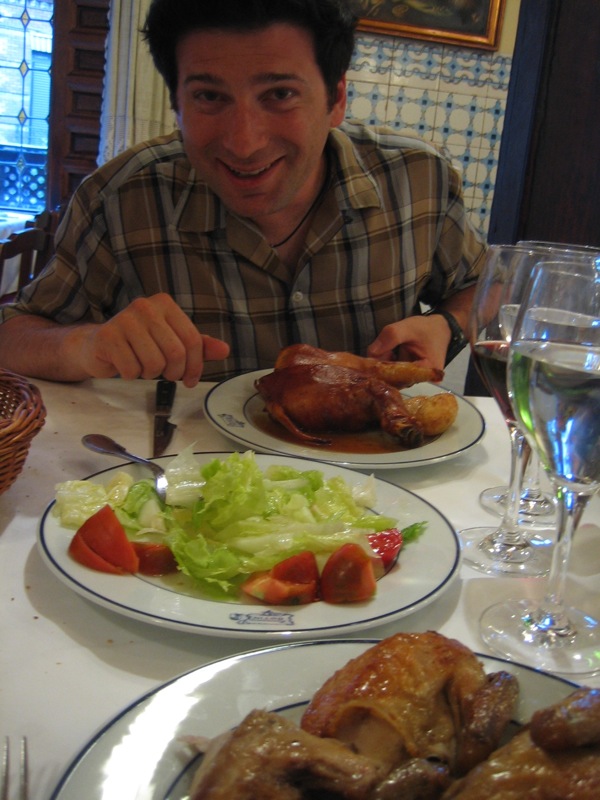 It wasn’t 3 seconds after the 280-year-old oak door shut behind us that an elegantly dressed waiter approached us and asked for our surname. The room dripped of old world charm. Dark wood furniture and white plaster walls contrasted in front of me as my eyes soaked up what it could. A few other patrons stood silently in the entrance way eagerly waiting to be lead through the depths of Resaturante Botin to their table. Danielle, my dining partner, gave the maitre d’ my surname. He promptly marked my name off his multi-page reservation list. In Spanish, he told us he would be right back and then disappeared into an ancient hallway leading deeper into the restaurant.

Restaurante Botin, in Madrid, has been serving up delicious roast suckling pig since 1725. It is their signature dish. In fact, they have become quite famous for it. Their location, just on the other side of Plaza Major, the largest square in Madrid, has only helped business. It was our only night in Madrid and we wanted to eat as authentically as we could. We figured, a restaurant that has been open for almost 300 years had to be great or riddled with mafia shady-ness. Either way, the experience was bound to produce a great story.

The maitre d’ returned promptly and motioned for us to follow him. He led us through a maze of hallways and rooms until we reached a stairway. As we ascended the stairway we entered a room on the second floor of the restaurant. There was a wall of windows that looked out over the cobblestone street. Stucco and dark wood furnished the room keeping consistent with downstairs. Old Spanish oil paintings of women at the market, bulls and matadors decorated the walls. We were seated at a table in the far corner of the room and left with two menus and a wine list to translate.

We had decided quickly on a reserve Rioja (21euros), a few appetizers and two entrees. The first appetizer to arrive was a gazpacho. Gazpacho is a fresh tomato soup. In Mexico it is traditionally served chilled and very smooth. But tonight, in Spain, it was served warm. The soup was quite chunky with bits of parsley and tons of lump crabmeat floating around the bowl. It was a delicious and unexpected twist to the gazpachos we are used to from Mexico. The second appetizer, garlic soup, hit the table 5 seconds after the gazpacho. The soup was piping hot. A pork-based broth steamed up and clicked my olfactory glands into overdrive. The garlic scent penetrated deep into my nose as my eyes finished deciphering the huge peace of bread soaking in the rim of the bowl. I grabbed my spoon in an almost reflex reaction. My taste buds opened up welcoming the broth to my tongue. Needless to say is way delicious.

Our next course was a simple salad made of iceberg lettuce and beefsteak tomatoes. Olive oil and red wine vinegar adorned the leaves. Soon after, as we sipped our second glass of rioja, our entrees breached the top of the stairs in the hands of our waiter. Danielle ordered the Pollo Asada (roast chicken) and I ordered the Cochinillo (roast suckling pig). This must be a big surprise to those who have dined with me before (wink). The chicken plate contained a whole chicken cut into two breasts and two leg/thigh pieces. Along side the chicken were three Yukon gold potatoes that were skinned, boiled and then baked. My pork plate contained the front leg and shoulder of the suckling pig. An identifiable hoof hung off the plate. This may have bothered some people but on this occasion it only increased my anticipation for the first bite. The same potatoes accompanied my pork as did Danielle’s chicken.

Both of the entrees were delicious but simple. We are both used to very robust and complex flavors and the entrees were not of this manner. Most of the food we had in Spain was bland compared to what we were used to. This is not to imply it was bad or tasteless, just different. They say Spain is the meat and potatoes country of Europe and that is certainly true in our experience. The plates are not garnished with anything nor are they presented in a manner as to make the food appear prettier than it is. Aside from their many types of chorizo sausage, which are quite complex, the cuisine generally tastes like what you see on the plate. No spice surprises here.

As the last of the chicken, pork and Rioja hit our stomachs our empty plates were replaced with dessert menus. After a bit of translation we settled on a strawberry custard pudding. The large bowl arrived with the creamiest yellow pudding and freshest strawberries I had ever seen pouring over the sides of the bowl. We didn’t hesitate to dive into the yellow lake and rescue as many red berries as we could fit into our mouths.

Completely satiated we asked for our bill. We decided to skip coffee and walk this meal off with a few laps around Plaza Mayor. Granting our waiter and host a good evening, we left through the same ancient oak door that had transported us into this roast meat haven. This time, when the door shut behind us, we were left on a bustling street of tourists, locals, street musicians, vendors, teenagers and stray dogs. During our meal the sun had set igniting the street and plaza into its nightly party. We wasted no time in jumping into it and burning off some of that meal.