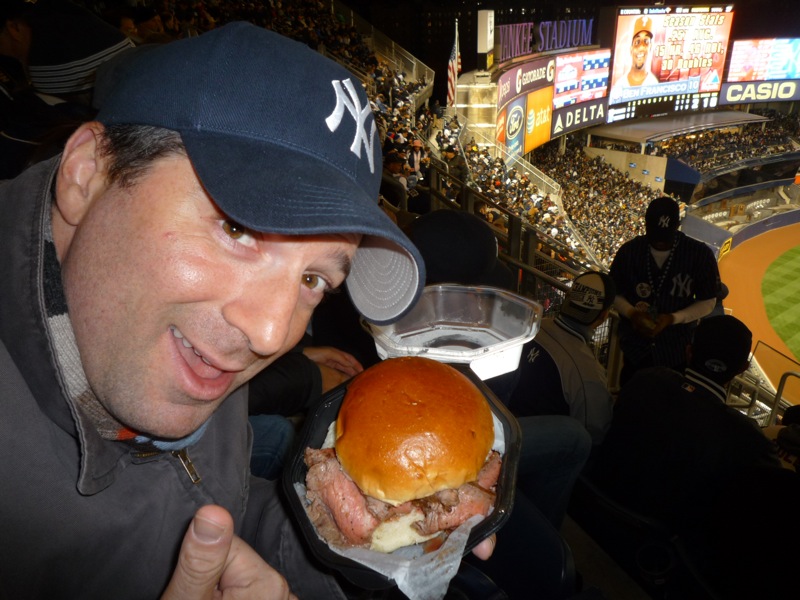 We are the well fed champions!!!

A half a pound of meat sits uneasy in my stomach as Mo winds up one last time to throw his, hopefully, last strike. The fans are going crazy, chanting, stomping and clapping. The ball is released, my stomach jumps again. The Lobel steak sandwich juices, blue moon beer and double hot chocolate all surge in my belly reminding me that every part of me is on edge with excitement. The ball is hit. 51,800 people momentarily stop breathing. A 2 second silence hangs like 10 minutes as the ball, now headed for the outfield is snapped up and thrown to first base. As the ball touches Teixera’s glove and the late runner crosses the plate, the ump signals an out and the crowd looses their mind. My stomach settles as I find myself 3 feet straight up in the air with both fists over my head. My three Uncles screaming and whistling can be heard over the pandemonium. Everyone in a 100ft radius of me instantly becomes my brother or sister and as Frank Sinatra starts his customary song the reality of the moment finally settles in.

15 minutes earlier:
I shared three of the last 6 outs with two high school friends I have not seen in 15 years. In the strange way that New York seems to place you next to people you know in a sea of strangers I found two of the Parlente Fam. Both of them still living in NY and both of them die hard Yankee fans there could not have been a better way to share the moment. Between pitches we played the standard catch up game and screamed our heads off with excitement. 3 hours earlier:
I cracked into my Lobel’s steak sandwich which was dripping with rare beef. The juice had soaked the bun making for a soft, delicious snack. I washed it down with the rest of my ice cold Blue Moon in under 5 minutes. Delicious, warm remnants dusted my lips just before I cleaned my self up with a final tongue lick. Hey, I am at a ball game I can be a bit barbaric. 4 hours earlier:
I waited patiently on a 200 person line as I watched a butcher furiously slice beef and slap it onto fresh baked buns. I have been known to pan Yankee Stadium food especially as it compares to CitiField. But the one must have snack at the stadium, that I dare say trumps all other treats at any New York stadium, is Lobel’s. Just look at those aged ribeeyes through the glass. A butcher on site carving and slicing beautiful meat into grill-able goodness. Every 10 minutes a huge rolling rack of fresh-off-the-grill steaks would roll by and be thrown onto the slicing table to be carved up into final pieces for the sandwiches. After 45 minutes I had three of those babies in hand and I was off to find my seats and meet up with my Uncles again. 5 hours 30 minutes earlier:
My Uncles are ALL die hards. They have loved the Yankees since I was born. I was raised into this Yankee world. Let me remind you that this is the same world that raised me into food. The whole reason this site exists. The family was getting psyched for what we hoped would be the final game in this World Series and the entire parking lot knew it. They also, not surprisingly, agreed. 5 hours 45 minutes earlier:
An unneeded but necessary tailgate dessert that I had to indulge in. Apparently these cupcakes are the new rage in my small home town of East Norwich. My dad sources these special for the tailgate. Even though he sat this adventure out at home on the couch I am sure he participated in the dessert snacking by keeping a few of these for himself. 6 hours earlier:
Back to that food comment. My family doesn’t mess around when they do stuff. Everything has a food element. A world series baseball game is no acception. A full spread of homemade Italian food was prepared especially for this day. My Aunts and Uncles took a day to prepare the gravy, slow cooked meat and antipasti’s. Me and my friend Ali made quick work of digging in. Ali is a huge Italian Yankee fan from a huge Italian Yankee family in her own right, so she fit right into the mix. Here Ali shows her delight for my Uncle Tom’s homemade baked ziti as we all talked Yankees, winning and Booo Phillies. 6 hours 5 minutes earlier:
Meatballs and Italian sausage sitting in gravy was waiting for us when we got to the tailgate lot. A delicious cup of Merlot was poured and placed on the tiny makeshift table along side my generously prepared sandwich. My Uncles just don’t fool around when it comes to food and Yankee games. 1 hour after:
Excitement and celebration pour out of the stadium as the Bronx air is continuously filled with chants, screams, whistles and howls of victory. To think that this is the first year of the new stadium and we brought home a win in it is quite amazing. As you looked around there was not a car in sight. All you could see for blocks was a sea of people creating a massive navy and white wave. 1 hour 20 minutes after:
One of the best parts of NY is that when something good (or bad) happens in town we all become a little closer. If only for a short moment, New Yorkers have this way of joining together to celebrate the moment. If I could deliver a transcript of the conversation (yelling and chanting) on my subway ride home it would make a hilarious, full length Judd Apatow film. These boys from Staten Island kept us amused, engaged and in the moment as they spewed happy and sometimes crass chants into the jam packed subway car.

Back in 1985 when my Uncle Brian coined the slogan ” ANYTHING FOR THOSE KIDS” I never thought it would last until I was 35 years old. Thanks Uncle B for hooking me up with yet another monumental moment in my life as a New Yorker. Aunt Joy, Thanks for keeping him sane.