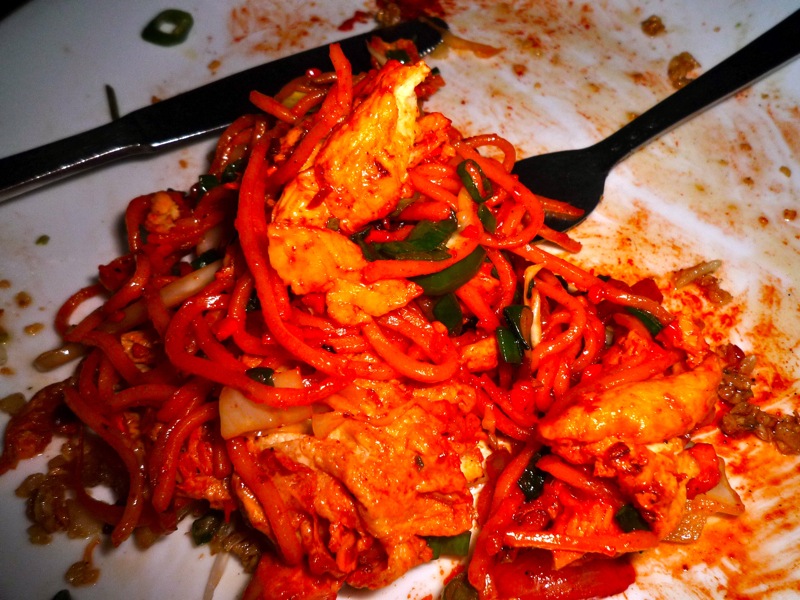 I suppose this is something like when my Jewish friends eat Chinese food on Christmas day. Diwali is the Indian-Christmas-like-New-years celebration in which on the first 3 nights everyone plays with firecrackers from dusk ’till 1am. And, I mean non-stop. 4 year olds lighting off cherry bombs. 15 year olds setting off 190 books of firecrackers in the middle of a busy parking lot. No rules and no reaction from the locals. It IS the way it IS. Happy Dewali is all I can say.

To celebrate I was headed up to Andheri West, a northern suburb in Mumbai, to meet up with my friends Vik, Brian and Monica. the plan was to hit a few house parties after a very non-traditional celebratory meal. Indians love chinese food almost as much as they love indian food (which they just call food) so it is not hard to find an open spot late on a holiday evening willing and ready to serve. We did some quick ordering and wound up soon after with a myriad of dishes all cooked in the chinese style but with an indian flare.

The top pic (not enhanced in color at all I swear) was a noodle and chicken dish. The following is the rest of the order. The food was washed down and we were off to house party number one in Bandra, another new suburb just south of the restaurant. On the way out I snapped this pic of the front of the restaurant to illustrate what a Mumbai suburb looks like. All those images of green lawned, neatly rowed, houses with driveways and picket fences should now be washed from your mind. For those of you who don’t know what this is a picture of, let me channel Peppe Anello for a moment. High-voltage transmission lines are used to transmit electric power over relatively long distances, usually from a central generating station to main substations. They are also used for electric power transmission from one central station to another for load sharing. High voltage (HV) transmission lines are made of high voltage (between 138 and 765 kilovolts) overhead conducting lines of either copper or aluminum. One of the key concerns in transmission of electricity is power loss in transmission lines (called line loss or transmission loss), dissipated as heat due to the resistance of the conductors. The smaller the surface area of the conductors, the smaller the loss to heat dissipation. High voltages require less surface area, resulting in reduced line loss. With high-voltage lines, the voltage can be stepped up at the generating station, transmitted through the transmission grid to a load center, and there stepped down to the lower voltages required by distribution lines.

In short, there was a crap load of power running overhead as we ate chinese food that evening. There seems to be a small statistical correlation between various diseases and living near power lines, and some biophysical mechanisms for the promotion of cancer have been proposed (such as the electric fields around power lines attracting aerosol pollutants), although none have been substantiated. Locating a restaurant near such power lines seems odd, irresponsible and stupid. In Mumbai it is simply normal.

I Made It To Africa