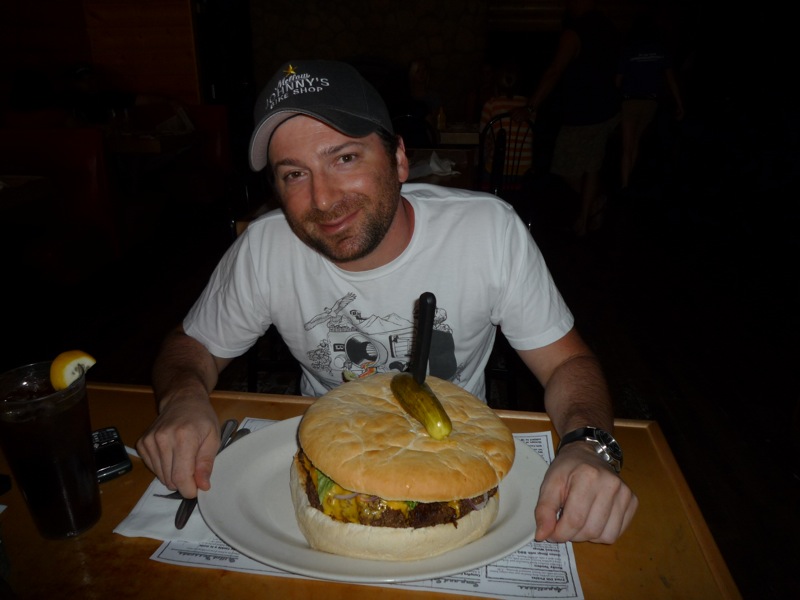 Maybe the title of this post is a little bold, but I think it is fitting for what I experienced on my last day in Memphis. I decided I was going to lay off the pork and find something new to eat. Part of this decision was based in the fact that most BBQ joints are closed on Sunday. In making that decision I also realized I needed to connect deeper with Memphis’ musical heritage than I had so far. Don’t get me wrong, the bands I heard on Beale St. the last two nights were amazing. I was just yearning for a more historical perspective before I left.

The diversity issue I raised in my last two posts on Memphis were still driving on me and I needed to sort that out a bit before I left. I started out at the Rock and Soul museum. It is dedicated to the emergence of the Memphis music scene. Much like how BBQ was born out of lack of money to buy better meat and food, the Memphis sound came from the roots of the poor. Black and white, alike, had struggles in the early 20th century and in Memphis music was their outlet. The museum tells the history of how white country singers started using blues sounds of African Americans into their music to create a new genre we now call Rock And Roll. Elvis, Jerry Lee Lewis and Roy Orbison pioneered some of these early songs that created the crossover. Conversely, African American blues singers started incorporating that Rock and Roll sound into their tunes which created two shifts. First, more radio airplay of black artists music. Second, “White” artist acceptance of “black” music and vica versa. Pioneers of Blues like BB King, Lester Hill and Sam+Dave were suddenly getting airplay on both black and white radio stations. Collaboration started between the two races and in a time of civil unrest, segregated waiting areas and extreme poverty, this “new” music bonded the races together as musicians. This then began to bond the audiences together as music lovers. I left the museum with a wonderful feeling of unity. My feelings of segregation that I had felt upon arrival in Memphis was gone. My next stop was the perfect accent to the message the museum conveyed. Something I used to do in college was attend the local Baptist church on Sundays. I loved the music and the way they celebrated their religion. Now, I am not the most religious person but I do have a lot of faith. It was Sunday and Memphis has the first baptist church in the country. What better place, and time, to pay a visit. I crept into the church and hunkered down in the back pew because I was way under dressed. I hung out for about 20 minutes listening to the singing, clapping and dancing around me. If you are ever feeling down, I highly recommend a baptist church on Sunday. You can’t not smile.

I realized I was starving when I left the church. I had been considering a challenge all morning. The Kooky Canuck is a spot that has a 7lbs burger. If you eat it in 60 minutes or less you get it free and they hang your picture on the wall. I decided that I really didn’t want a challenge, I just wanted a REALLY BIG ASS burger. Plus, I wanted to send Ant the picture and rub it into his face (Ant’s a huge burger guy). I sat down and the lovely Ashley came over to take my order. Ashley was Memphis through and through. She wore a plaid paperboy cap covering her cheek length reddish brown hair. She talked with a Memphis drawl just enough that I could pick it up but not enough to focus on it. Jeans and chuck T’s rounded out her comfortable Memphis look. I ordered my burger and we had a quick discussion about why I was not taking the challenge. She conceded and went off to put in my order. 45 minutes later the monstrosity you saw at the top of this post arrived on my table. Below is a little video that just begged to be shot once this beef bonanza was staring me in the face.

After about an hour of nursing the burger and chatting occasionally with Ashley, I decided to call it quits and have the leftovers packed up in three sections to go. I hate to waste food and my plan, from the get go, was to make some homeless friends and give them some lunch. This was pretty easy to do in Memphis and I finished finding some friends with in a few blocks.

I needed to walk off some of this beef so I decided to stroll down Beale St one more time. It was about 3pm and things were starting to bustle in the outdoor spaces that slip back off the sidewalk.  I wasted away the afternoon hopping from band to band and sucking up all the music I could before I had to head out to the airport. As I jumped into a cab I was treated to one more Memphis lesson by my cab driver. He was a teenager in the 50’s and told me stories of BBQ and Beale St. I was so in awe that the conversation continued for another 10 minutes after we arrived at the airport.

Memphis is a great town with an amazing culture and history. The people are more than they appear at first glance and after digging in a bit, over the last 3 days, there colors came out loud and clear. A good riff and some good Bar-B-Que really can change the world.

Talk ain’t cheap but hotels could be