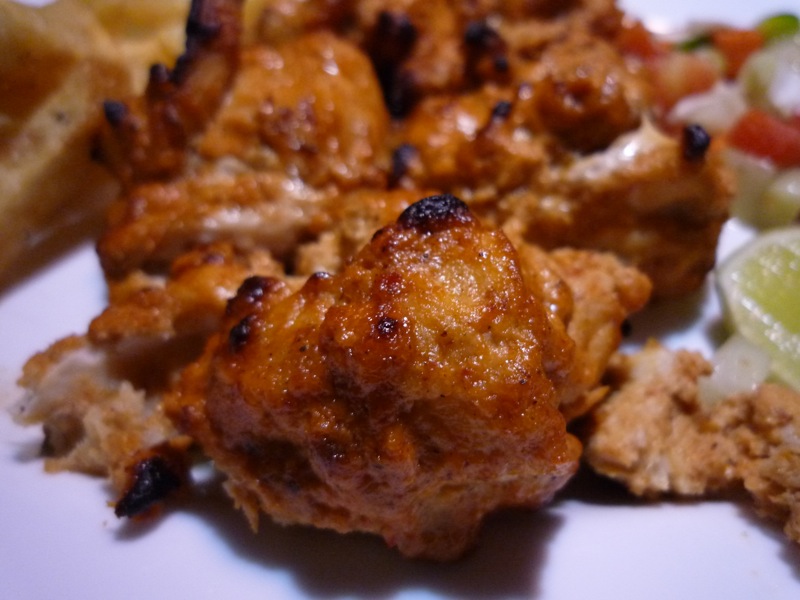 Choosing one “best” meal is very tough, as you could imagine. As we always say on this blog, meals are just as much about where you are and who you’re with than what you are eating. For this post I am going to suppress that thinking just a touch and focus heavily on the food.

Needless to say I ate a lot in India. But, as I recounted the many meals I consumed, one stood out among the rest. Well, three stood out actually. Did you really think I was going to be able to choose just one? My saving grace is that the three meals come from the same restaurant. I was in the town of Palolem in Goa. A few of my friends had told me to seek out a fish restaurant on the beach. After asking around a bit I was directed several times to Dropadi, a sand floored, thatched roof, open air restaurant abutting the ocean that keeps a huge chalkboard of daily specials as its centerpiece. The big board, as I had come to know it, was the only thing I needed to read when I sat down at a table. The regular menu seems superfluous after you read the first 5 lines of the 25 line specials board. The food here is so damn tasty and fresh that I ate here all three nights I was in Palolem.

Night 1
I started out with a large, ice cold kingfisher beer as I bellied up to the outer bar of the restaurant. The bar looks right out onto the beach and straight into the ocean. A great place to watch the sunset and fill your belly as well as watch the locals and tourists interact. The first item ordered off the board were fish papeds. Papeds are just like pappedam, the flat and crunch indian bread, only they roll and stuff them before frying them. There was a list of 5 types. I ordered the fish. I didn’t care to know what type of fish because everything at Dropadi comes out of the ocean only hours before. With a dip in the hot sauce the papeds were the perfect compliment to my cold beer. Next I ordered some tandoori tiger prawns. These you can order by the piece. I disobeyed my stomach and held my self at two. The fish was super fresh and the spices were perfectly fused to them from the wet heat in the tandoor. Next up was tikka masala red snapper(pictured at top). I love red snapper. Maybe my favorite fish. Choosing something else was not really an option after my eyes saw that on the specials board. The snapper was super moist and meaty. I have never had such a thick, meaty piece of snapper. I was looking for bones in disbelief because of the thickness of the pieces. None to be found. Again the tikka masala spices were perfectly graphed to the fish creating mouth watering bites every single time. My taste buds were on over load instantly and consistently until every last piece of fish was in my belly. I augmented this course with a fresh naan that I would use to occasionally wrap around a piece of fish and soak up any spices that had fallen to the plate.

Night 2
Sitting in the same spot as I did the night before I ordered the crab soup off the big board and a kingfisher to accompany it. Up next was a mountain of mixed fish tikka masala. I know what you are thinking, “Isn’t that the same thing you had the night before? Why would you do that?” Well, I’ll tell you. First, the night before was so damn good, how could I go wrong. Second, I wanted to give the tikka masala preparation a second try and see if it measured up or was just a fluke of super tasty goodness. Third, when you really get down to it the spices in india are very similar. When you add in the tandoor oven, things start tasting even more similar. So the real hero in some dishes is the bulk. In this case the fish. As I said, the fish comes straight out of the sea hours before so trying the mixed tikka would get me a nice cross section of the daily catch. On the above plate I had prawns, squid, octopus, mussels, clams, snapper and some kingfish. I opted for rice instead of a flat bread this time because, as I was informed by a semi local, southern indians eat rice not bread.

After leaving the restaurant satiated yet again, I decided to stop by the liquor shop to try the local spirit fenny. Fenny is a high octane, cashew schnapps like booze. You can drink it or remove paint with it, your choice. Not for the faint of heart.

Night 3
On my third night I needed a long meal. I had spent all day traveling and exploring the spice farm and I was ready to relax and let me mind drift off. Once again I found a spot at the beach bar section of Dropadi and ordered a cold one. This time a Kings. The beer arrived just in time for a beautiful sunset. First up tonight was another order of papeds. This time shrimp papeds. Delicious again. The wrap was a little chewier this time, which I liked a lot. The main course this evening would be curry crab. I had been waiting for the last 2 nights to get some of this fresh crab but they had either run out of crab or only had giant options left in the bucket. I could have made friends but with the way I eat I figured that might turn ugly. After I ordered one of the waiters brought a box to my table. I peeked inside and saw three crabs of various sizes, their claws bound to their bodies with twine. He instructed me to pick one. I choose a bright blue medium sized one. The waiter scurried off to introduce him to the pan. Before I knew it the waiter was back with the giant plate of curry crab above. The crab was semi cleaned and cracked so I knew I would be getting dirty. Having anticipated this I ordered three naan breads, plenty to dip, wipe and soak up all that delicious curry. I dug right in attacking the crab with warrior like intensity. I became so involved in my task of extracting pieces of meat from the hard, blue, curry covered shells that I paid little attention to my surroundings. Crack, pull, dip, bite, swallow, repeat. I continued my frenzy of crab and naan eating until my plate looked like this. I had been so consumed that I failed to realized that I created a bit of a scene with the way I attacked my plate. A good portion of the restaurant was looking over at me. I could only imagine what they were thinking. My guess was they had never scene such a frenzy so I leaned back and made eye contact with the nearest, staring patron and said, “That was really good” To bring some class back to myself I ordered a chai tea and sat quietly sipping until most of the restaurant had left. This new friend had landed next to me for company as I sipped since all my onlooking friends had left. I still don’t know what kind of insect he was but he was highly intelligent. You can tell by the size of his head. No much of a conversationalist though. I enjoyed the company none the less.