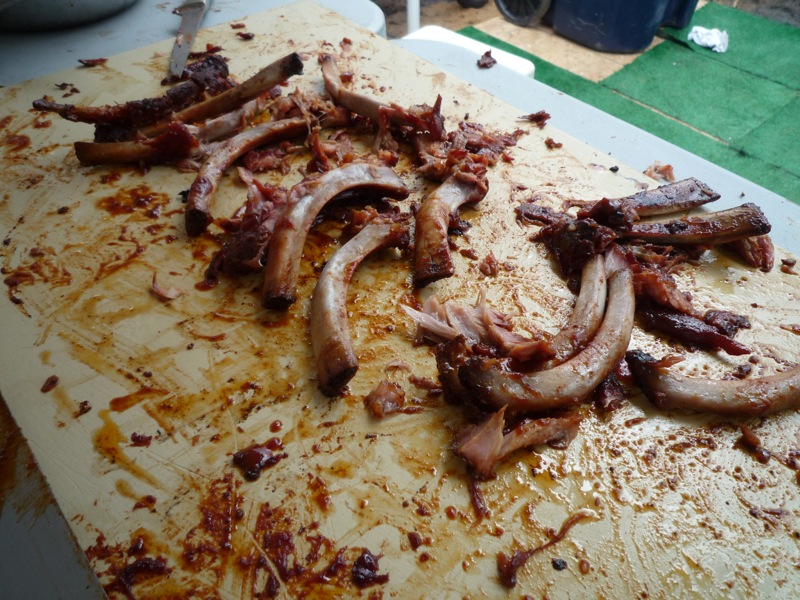 Yes. I ate a lot of pork again. The below video gives you the hour by hour. The expanded dialogue on the day follows.

My previous BBQ adventures woke me up with a need for more smoked pork. I started the day easy with a coffee and a walk down main street to watch the trolleys and the early morning stirring. I had planned on visiting Rendezvous BBQ for breakfast around 11am (when they open). I stopped back at my hotel, post walk, to shower up before hitting the ‘que. Coincidentally, Rendezvous, could be seen from my hotel window.

I mentioned in my last post the tension I felt between the races here in Memphis. That thought unfortunately popped into my head when I went to choose my T-shirt for the day. I haven’t had a thought like this for some time and I tried to convince myself I was over thinking things but my gut kept telling me that my choice in attire was off. As an explorer, I sometimes wander into areas that are not touristy and very local. As a rule you want to be as non-descript as possible when in these areas. Just to be clear, I am talking about a chuch in Napoli, a red light district in Malaysia or an African American neighborhood in Memphis. This shirt was definitely not that. In the end, I decided not to wear it but was upset that I even had the debate with myself. Later that day, at the festival, I saw a little white girl run out from a tent to give a little black boy a gift of beads. Witnessing this I immediately thought about the tension that I described in my last post. This act made me smile and realize that even though Memphis’ history has shaped its culture, it’s future is still not bound to the bad habits of the past.

Ok. Back to the food. So off I went, out the door, around the corner, into the alley and down the steps to Rendezvous BBQ. I sat at the bar surrounded by vintage signage, a rack of guns and various accumulated artifacts from the bowels of Memphis. I ordered the rib and shoulder combo and a sweet tea. Quickly my linebacker sized bartender/waiter came with a giant plate. Setting it down in front of me I counted 5 bones, a hunk of shoulder on top of some bbq sauce soaked white bread, slaw and baked beans. The ribs were some of the best I have had yet in Memphis. Tender, moist and a beautiful dry rub across the top. My linebacker was very attentive, filling my sweet tea every few minutes, as I savored each bite. Moving on to the shoulder I placed a flavorful bite of slow cooked Boston butt on my tongue. It was dry spiced and but had pockets of a smoky sauce as I chewed. The slaw and the beans were both excellent as well. Even thought it was mayo-based slaw, it didn’t swim in mayo and had a fresh flavor to it. The beans were straight beans. No bacon other pork accompanied the beans but they had a nice rich smokiness to them. I finished up at Rendezvous and stopped back at the hotel to clean the sticky off of me.

I left the hotel and headed down to the festival. On the way to the park, I stopped and added to the collection of Memphis building photos I had started on my morning walk. Memphis architecture is quite interesting to me because it has a large warehouse district that is spread across the city. Besides the few modern high rises the buildings are generally low. Many of the buildings are brick with large steel supports. As I poked around town, I noticed several old warehouses that have now been converted to residential living spaces. A sucker for old typography faded into brick facades, I explored a bit more before heading down to the festival.

I happened upon a gated area that ran along a bluff which looked down on the park and festival. After bribing a security guard for a day pass into the area, I discovered an isolated residential area of Memphis in which every house seemed completely different in design style, era and construction. The most fascinating thing was that some of these modern buildings had backdrops of the old factories. This created a tension that was absolutely beautiful to me. Here is a quick slideshow of my favorite buildings from Memphis.

I finally made it down to the festival and went straight to the taster’s choice tent where they were giving a seminar on how to judge BBQ. I learned a great deal about the formalities in judging such an informal meal. To become a judge one has to take an 8-hour class given by the Memphis BBQ Network. It’s a one day class in which you learn how to spot and taste good ribs, shoulder and whole hog entries. At the end of the class you must take and pass a written test. This enables you to judge contests officially. Before you can judge Memphis in May you must judge three smaller competitions. For each of those competitions you have to judge all three categories (rib, shoulder and whole hog)

So what is judging like for the Memphis in May contestants you might be wondering? There are many smaller competitions inside the big three (rib, shoulder and whole hog). For this description we will be focusing on those awards. Entries are judged on two types of judging, blind and non-blind. Blind is simple enough. A series of judges taste 5 samples at a time marking down their favorites. These plates have no garnish or other condiments. It is the straight up pork. For the non-blind judging, it’s a bit more hands on and intense. Each team is visited by 3 judges. These judges sit with the teams in their camp for 15 minutes each. After the first judge the team has 5 minutes to reset their tent and prep for the next judge. This happens three times in a row until all three judges have been through the team’s tent.

Seems easy. It’s not. Each pit master must do a full dog and pony show for each judge. They take them through their gear, their smoker, the techniques, the ingredients. Finally they sit them down and let them taste. To add to all of that, the judge is also looking at the condition of the camp. A cigarette butt on the floor, grease left under a fingernail or a stain on an apron can cost a team dearly.

I was lucky enough to befriend team, Ribdiculous. These were NYC boys and I new we would have something in common. On the first day of the festival we got to chatting and I was invited back for some food the following day. Damon and Shane cook at Craft and Craft Steak in NYC, two of the finest restaurants Manhattan has to flaunt. Neither is a BBQ restaurant. When I asked them why they were here they replied, “For fun!”. That was the perfect answer for me. In my experience pro chefs can sometimes take their jobs a bit too seriously and after that answer I new I would get along great with this crew.

Mid day on Saturday was judging time and I decided to head down to Ribdiculous to watch them go through it. As I arrived I had to chuckle to myself as I saw them all standing semi-circle with their hands folded behind their back. Shane was giving the judge the show while the rest of the team stood at attention. This is NYC service through and through. I expected nothing less but was still surprised to see their Manhattan based habits come out so strong amongst a much less sophisticated environment. (Referring to the festival and food not the people, just to clarify). I watched for a while and then decided to wander a bit and check back with them later.

I headed off to a few more classes in the training tent. There I met Amy Mills daughter to one of the most winningest men in BBQ history. She gave a talk on the history of BBQ and then her and I started talking USA BBQ joints. She has been to all my favs, LC’s, Dreamland and Blue Smoke. In fact, her dad helped set up the kitchen for Danny Meyer and is the “born into BBQ” partner for the restaurant. We talked NYC BBQ for the next 15 minutes until we were both pulled away by the National Pork Board to publicly announce our favorite “pork moment” No off color jokes please.

On the way back over to the Ribdiculous Krewe I stopped for a rib at the Weber grill booth and then did a quick check of the results board to see who won the best whole hog award. Turns out the guys from 1st Party Q won the whole hog prize. These guys invited me, yesterday, into their tent to take some pics of their hog before it went on the pit.

I finally made it back to the NYC guys and was greeted with a long pour of cold beer into my now empty oversized fresh lemonade cup. The judging was over and they were about to pull about 10 racks of ribs off the smoker. They invited me to stay and chill. I accepted. The crew. Damon is second from left. Lauren is in the middle. Shane is on the far right. These ribs were done to perfection. A wet rib but with a solid glaze on it so it didn’t make you fingers gush sauce. The flavor was as sophisticated as their judging stances. I could taste NYC in every bite. The meat was perfectly done pulling from the bone with the tiniest coaxing from my lips. This was hands down the best rib I tasted in all of Memphis and it wasn’t even a Memphis rib. It goes to show you that good BBQ can be learned not just born into. I stayed and tasted, chatted and drank with the guys for a while before moving on. I needed a rest and some digestion time before my next rib joint adventure.

A few hours later I was back at my hotel and feeling the rib meter getting low. I chatted up the two receptionists at the front desk of my hotel to get some insight on which restaurant I should try. After some debate I decided to head to A+R BBQ. I was particularly interested in the BBQ spaghetti, a blasphemy in name alone.

The store was just a few blocks walk away. It was a very jointy looking place. Glass windows across the front, bare bone basics inside. The waitress sat me at a booth and happily brought me a tea. I ordered 5 bones with slaw, spaghetti and some fried okra, another Memphis specialty. As I sat there a police officer walked in. Everyone who worked there knew him and half the patrons did also. One of my cabbie’s had said to me that Memphis is a big small town and this was complete proof off that. In the end, A+R was a let down. The spaghetti was horrible as expected but the ribs were subpar as well as the slaw and the okra. Good sweet tea though. I walked out of A+R and took a few lapse around downtown Memphis to walk off the swine. I then headed back to my hotel to rest up for my final day in Memphis.

Allora. I’ve been in Italy.