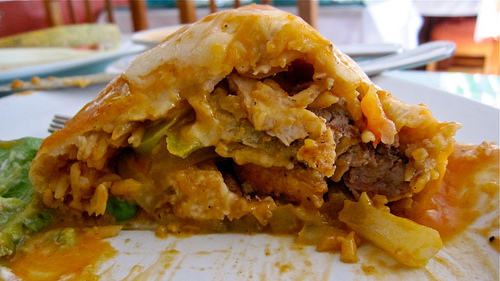 I recently went back to Pipi’s in Puerto Vallarta because it’s been a while and it’s just so good. I decided on getting something I have not ordered there before and usually don’t order, the chicken and steak burrito. It was intriguing to have the uncommon combination of chicken and steak together. This was packed to the max with lots of meat, cheese, peppers, little rice (key for me), and lots of sauce as seen above. As I mentioned in my previous post about Pipi’s they make every portion huge. This burrito was no exception. This was not the kind of burrito you pick up with your hands. A fork and knife is mandatory for this meal.

One other thing I want to point out about the meal was the sour cream. The sour cream in Mexico has been so fresh and creamy. With out a doubt the best sour cream I have ever had. It is how sour cream should be.