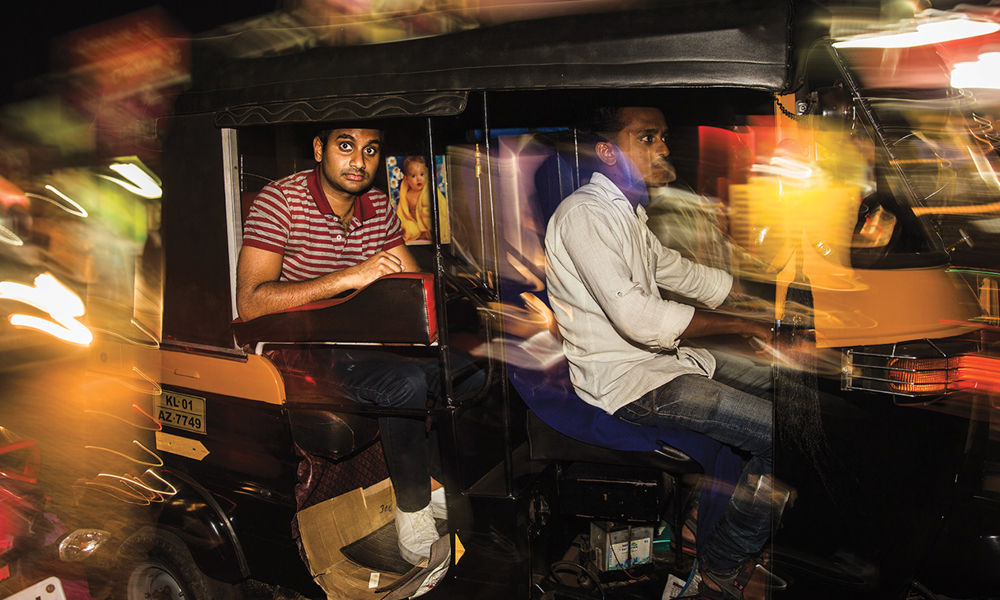 Aziz Ansari and I have a lot in common. We both love pasta, live in NYC, tell jokes for a living (me in advertising) and felt like foreigners in India. A few days ago T: The New York Times Style Magazine sent me the above video about Aziz’s trip to Trivandrum. Having just finished my second round of binge watching Master of None I felt a compulsion to learn more about his trip.

As I discovered, our biggest similarity is letting our stomachs lead our exploration when traveling. Much like he did, I found myself eating with my hands, exploring a market, talking to a fishmonger and chatting with my “new” grandmother as she smiled and spoke Kannada to me. I’ll explain that last one in a minute.

Even in India, I was kind of an outsider.

In his article, Aziz examines the relationship between his roots and his upbringing. this lead him to feel like an outsider in a place that he should feel accepted. I’ve heard this before from other Indian-Americans when they visit family in India. It’s interesting but the same thing happens to me in Italy.

My affinity with India started back in art school when studying colors. Color revealed culture when I discovered the Holi festival. Nine years ago was my first trip to India. I fell deeply for the culture, the food and the chaos. This is analogous with moments Aziz mentions in his story. I too felt like a foreigner but for more obvious reasons than he did. I stick out like the white anda in the brown anda basket. But, unlike Aziz, I expected that.

The longer I stayed in India an interesting thing happened. Culturally, there are far more similarities than I anticipated between the Indian and Italian culture. This similarity seemed to make me less foreign the longer I spent in India.

Five years ago I married into a huge South Indian family. I was “adopted” by them immediately. This “adoption” by my wife’s family has made me more Indian than I ever thought possible. The love (often through loud aggressive talking, much like Italians) I’ve been given equates to acceptance and even responsibility. Which is to say, my Indian relatives look at me no different than my own family. This has slowly, with each visit, tempered me feeling foreigner to, at times, actually feeling like a local. To be clear, I am not suggesting I could ever completely feel or be perceived as a local but there is a deeper blending with every visit.

This reminds me of a moment I had standing in front of the bus station in Mysore. I’ll never fit in on the streets in India but in this moment I did. For a few minutes, for whatever reason, the local eyes looked past me, the kids ran by instead of tugging on my shirt, I received a few authentic “hello” head waggles and was even asked directions to a chai stand. In those moments I cemented the connection between me and India’s amazing, diverse, delicious and comforting culture.

Aziz closes with a KFC experience he had in Trivandrum. His stop was to explore an “Indian interpretation of something quintessentially American”. This moment paralleled my stop at McDonald’s in a Mumbai mall. His KFC promoted Chizza, a breaded chicken strip covered with cheese and marinara sauce. My McD’s promoted the Chicken Maharaja Mac, a double veggie patty sandwich. In both cases, an adoption of the west is making both Indian-Americans and American-Americans feel less foreign in a country that used to make even the British-Indian feel out of place. I’m still uncertain if this deserves blame or praise. Either way, the next time I visit my family I suspect Master of None will be streaming on my cousins smartphones.

Aziz’s full article can be found here as well as a slideshow of his travels.
Photo credit/Top Image: Kenneth O Halloran