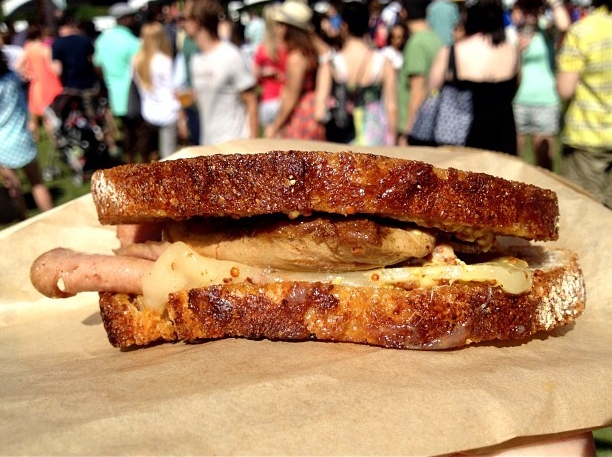 The long awaited artisinal, celebrity chef, food festival known as The Great Googa Mooga came and went this weekend. By all accounts it was hit and a miss. The weather, for one was, unarguably, perfect. Aside from that, the easiest reaction to sum of the event is “Great Googly Moogly“. The above depicts one of my ten different tastes which I managed to swallow inside a 3 hour window on the, apparently less crowded, Sunday. M.Wells provided a disjointed ingredient list that I just had to sample. Fois grois, horse bologna and cheese on some toasted 9 grain couldn’t be from more opposite ends of the pantry. As separate components many wouldn’t touch them. Together they certainly would turn away. That’s the beauty of the M.Wells. What you think would never taste good is amazing when put together. At $15 it was worth every cent. Some of the rest of my snacks?…not so much. Rather than complain or embrace I’ll let the links below elaborate. As a final word, I know how to make great food in mass with a makeshift kitchen. I also know a little something about what it takes to pull off an event this large and ambitious. Things could have been better but things could have been much, much worse.

Fork in the Road says…