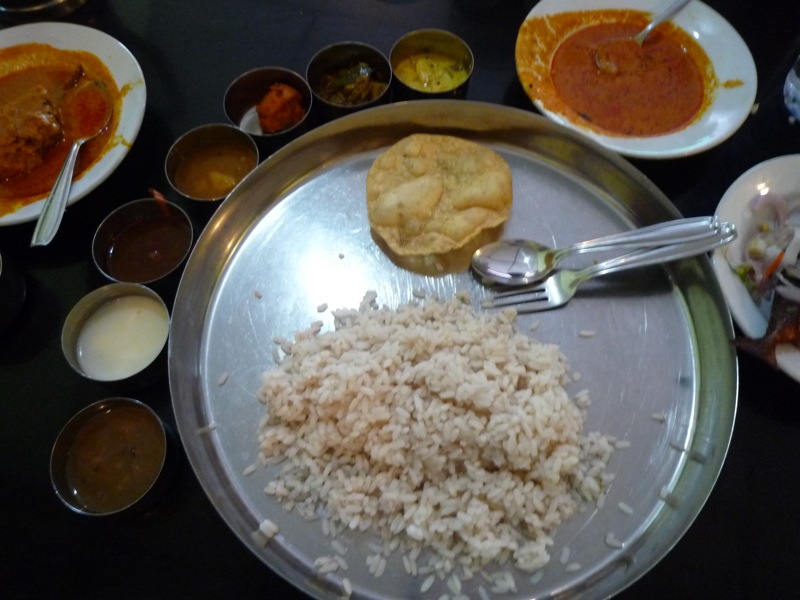 Munnar is a town that sits high in the mountains surrounded by tea plantations. It had taken me 6 hours to reach it by car. In those 6 hours I had been to an elephant bath, waterfalls and a spice farm. Now I was about to roll the dice. My driver and I we hungry and we pulled off the road to get some food. Finding a parking spot in the bustling town we walked towards a series of restaurants. My driver signaled to the restaurant I was supposed to eat at. The safe restaurant. The tourist restaurant. The clean restaurant. The non-local restaurant. The in-authentic restaurant. I started towards it as my driver headed in the opposite direction towards “his” restaurant. I stopped in my tracks spun around and ran after him. I explained I wanted to eat with him. I wanted to eat where he ate. He nodded and the two of us walked another 20 feet into a tiny little roadside joint. As I entered the packed restaurant of ALL Indian men looked up at me. We found our way to a couple open seats shoulder to shoulder with other men already eating. My driver signaled to the waiter and he ran off. I looked around and realized everyone was eating the same thing. Just as I finished this analysis the waiter was back with the same large silver tray I had just finished noticing in front of everyone else.

Inside the tray was a huge scoop of rice and 9 small stainless steel cups each containing a different sauce. I watched my driver to see what to do next. He removed each cup and placed them neatly around the outer rim of the circular tray. I mimicked him. Next he rolled up his sleeve on his right hand. Again, I did the same. Next the waiter came back carrying a large silver bucket with a giant ladle in it. Re extracted some orange, spicy liquid from the bucket and poured it on both of our rice mounds. My driver put his right hand straight into the rice and started shoveling it into his mouth. I hesitated for a second and then dove right in myself. i didn’t know exactly what I was about to eat but at this point I knew there was no turning back.

A minute later the waiter brought a deep fried fish about 6 inches long and placed it next to me. My driver smiled at me trying to let me know that he ordered that for me special. We sat in silence pouring sauce, hand mixing it into the rice and shoveling it into our mouths for about 20 minutes. As I ate I wondered with every sample of new sauce if it would be my demise. Rule number one, was NOT to eat any sauce that is at room temperature. It is these sauces that get people sick. But, what was I to do? I refused to eat where my driver dropped me. I was sitting 10 people deep at a table of Indians with a giant tray of rice and sauce in front of me. The whole restaurant was watching me. And, it smelled delicious.

Having finished rolling the dice we climbed back into the car and headed for top station. Top station is the peak where the state of Kerela (which I was currently in) and Tamil Nadu meet and it was another 2 hour drive from Munnar. The whole trip through the beautiful tea plantations, wild elephant spottings and monkey encounters I was hoping my stomach was not going to punish me for eating “off the reservation”. Let’s just say the bathroom options were rudimentary…..and by that I mean non-existant. 2 hours later I reached the peak and was rewarded with an amazing view and a settled stomach. The rest of the evening and the next day was more of the same. By the time I hit the 24 hour post meal mark I new I was in the clear. With a subconscious sigh of relief I boarded a rice boat to start the next eating adventure of the trip.