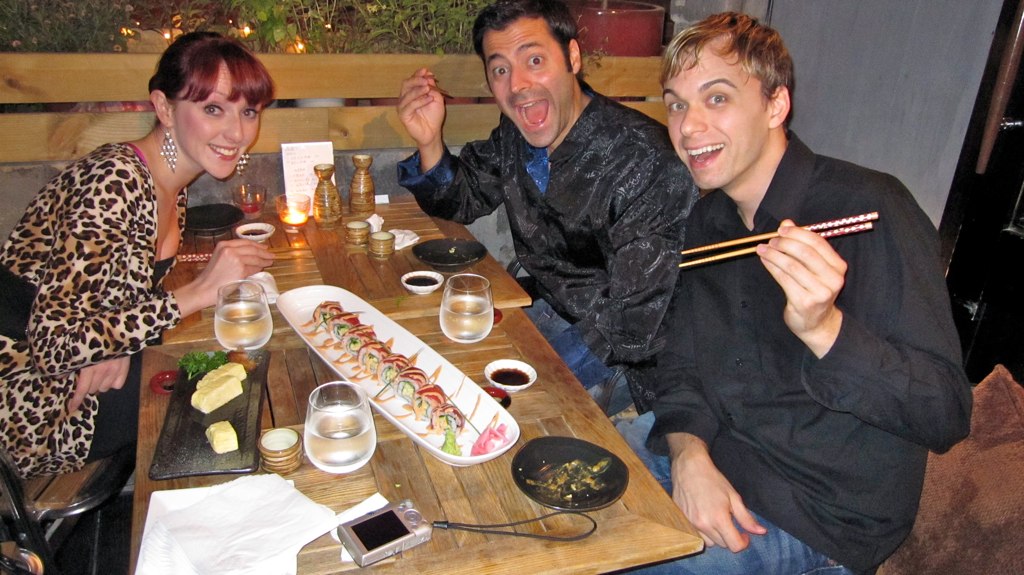 Shanghai is a really REALLY big city. Over 20 million people live here. Some how we managed to find this really small area that has lots of restaurants and cafes. The area is really tight, like ally ways making up a maze. We went to a little sushi restaurant up stairs called Akurah and sat out on a balcony. It was about 10pm and there was hardly anyone around. We ordered a lot of sushi, sashimi and chicken curry. We were having a good time laughing and trying to communicate with the staff until the cops came. We were being so loud and really didn’t realize it but the residents of the area started to complain. Maybe it was the drinks, maybe just being around good friends but what ever it was, bottom line, we were so loud that the cops came. We became as quiet as we could be. Didn’t want to get hulled away to a Chinese prison for disturbing the peace.

The food was outstanding except for what I thought was an egg roll. It tasted like a sponge dipped in toilet water. Not a typical egg roll I was thinking about. The two sushi rolls we ordered were great. One had tuna and the other eel. We ended up ordering another roll after because they was so good. It was a nice little area of the city. Apparently earlier in the evening it is really busy and people are all dressed up to go out there for coffee and dinner. That would have been nice to see but we all had to work later than we wanted. After dinner we hit the town! On is on a roll