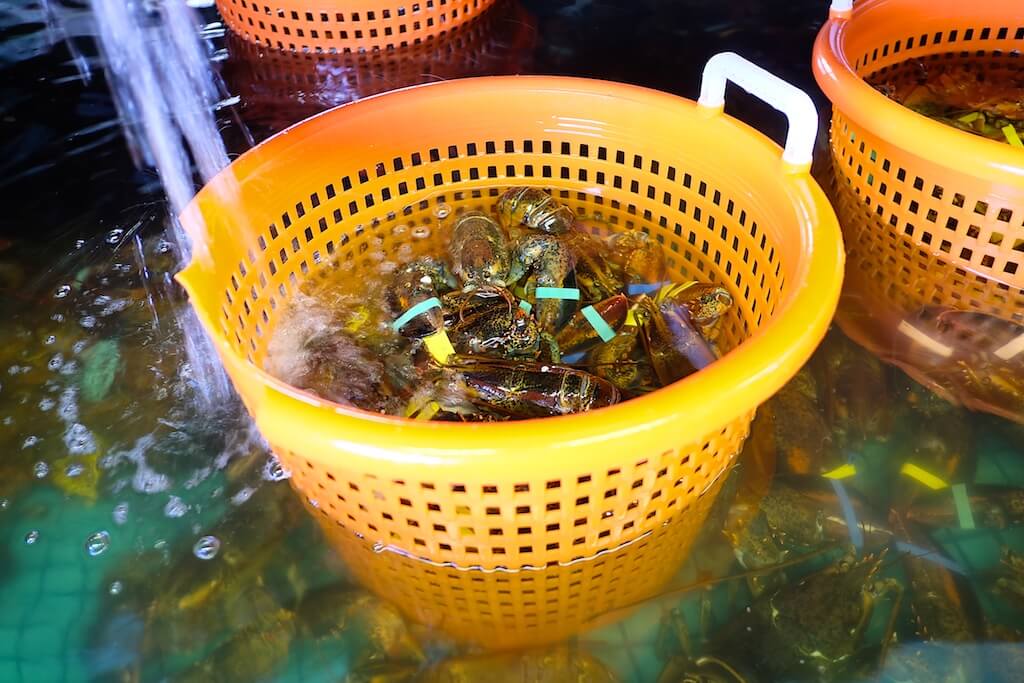 It’s a bit ridiculous that I’ve been living on the east coast of the United States for almost four decades and I have not explored the coastal towns of Maine. The legendary fresh Maine lobster lobster pounds are only part of why I decided to make this solo drive up to the pine tree state. My other reason was expressly more important. I was hitting the 6 month mark on my departure from Manifold, the agency I started 5 years ago, and I needed to change my latitude. PLUG Corona. Turns out, you can take the ad man out of the agency but you can’t take the headlines outta the ad man.

The 6 hour drive gave me plenty of time to think, catch up on podcasts and stare out the windshield into the never ending coastline. When I did make a stop it was due to an interesting sight, structure or, the inevitable, hunger pang. I’ve compiled this adventure in a video aptly named “Maine Lobsta” given my predisposition to find the best food wherever I’m traveling. I embedded it down below for those who want to skip the words and pics.

The first hard break I commanded of my trusty 2003 Nissan Frontier came in the early evening of day one. The vast landscape abruptly broke with this beacon of commerce shining through the dusk.

The self described “odd lot outlet” is a monstrous warehouse chock full of beachy necessities and tchotchke-esk Maine souvenirs. The glow from the parking lot out the windows and doors of Big Al’s was the Close Encounters for shopaholic-tourists. A short drive further and I curved around a bend finding myself comfortably gliding through the small town of Wiscasset. I was caught off guard by the tiny size of the town with a perfectly positioned shack at the end of the short business district. I pulled into a parking spot just as the clouds dropped a light drizzle adding a slight fog to the landscape. 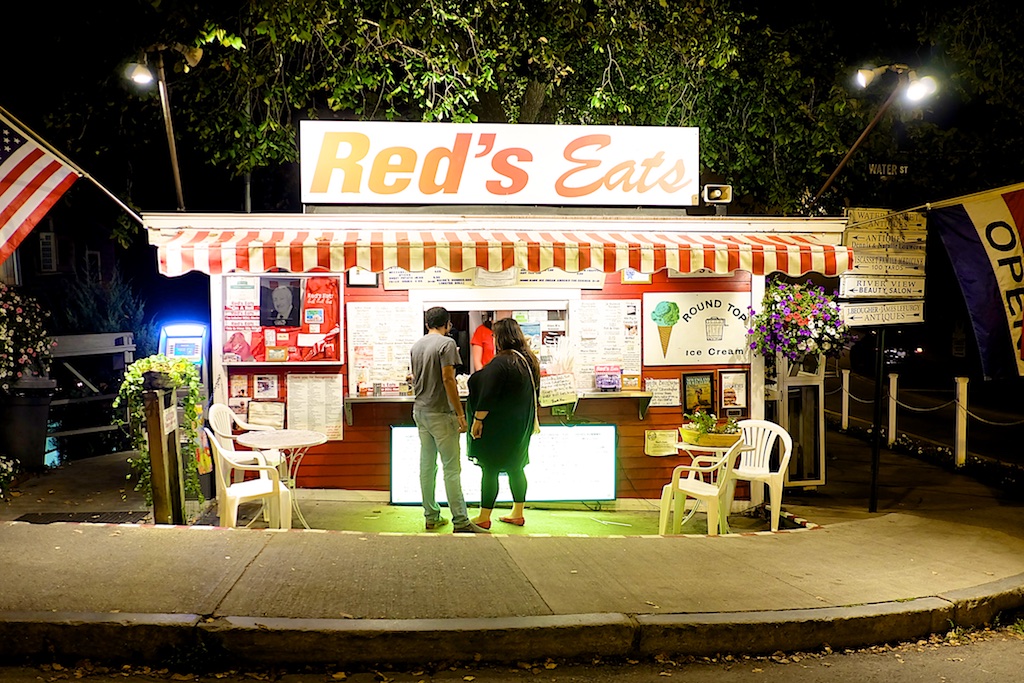 Red’s Eats was the only thing stirring on the entire street. As I approached to get the perfect photo, my point in stopping, I read the sign claiming their #1 Lobster roll in Maine. Still completely full from my non-lobster dinner in Portland, I pondered my move. Six minutes, $21.55 and multiple coaxing techniques from the woman heading up the order window, I sat down with this. Straight lobster in a toasted bun. Side of butter. No mayo. No celery. No nothin’. I destroyed it not even pausing to breath. It was that tasty. 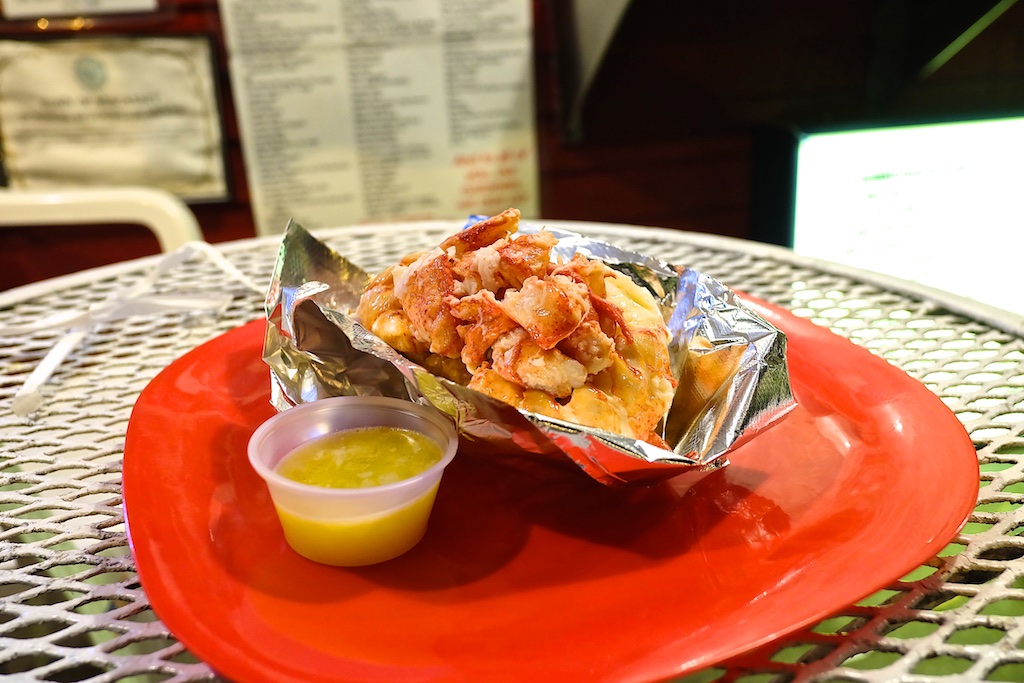 Day two started with a stop in Belfast, a quaint yet slightly stuck in the pastt town about 2 hours north of Portland. Their movie theater exemplifies this point. 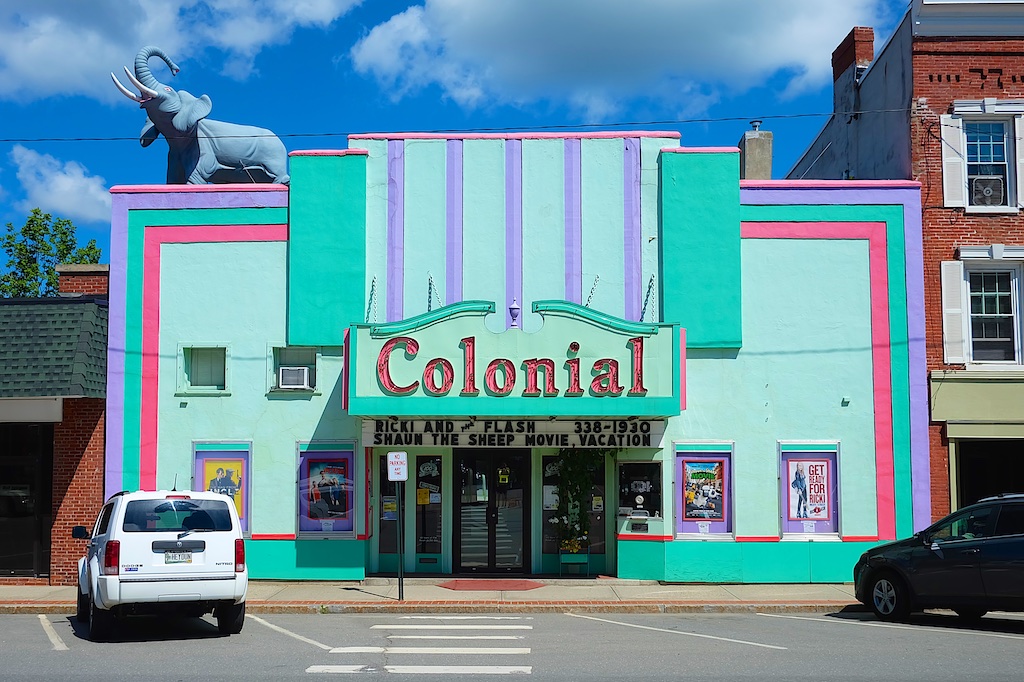 The highlights of this little town were the Food Co-Op and one of the states most legendary lobster pounds. The Belfast Food Co-Op kept me occupied for over an hour as I hunted for local food producers on their well organized shelves. I picked tons of goodies which you’ll be seeing posted soon. The most known of the bunch is Raye’s Mustard which comes in over 15 flavors at my last count. 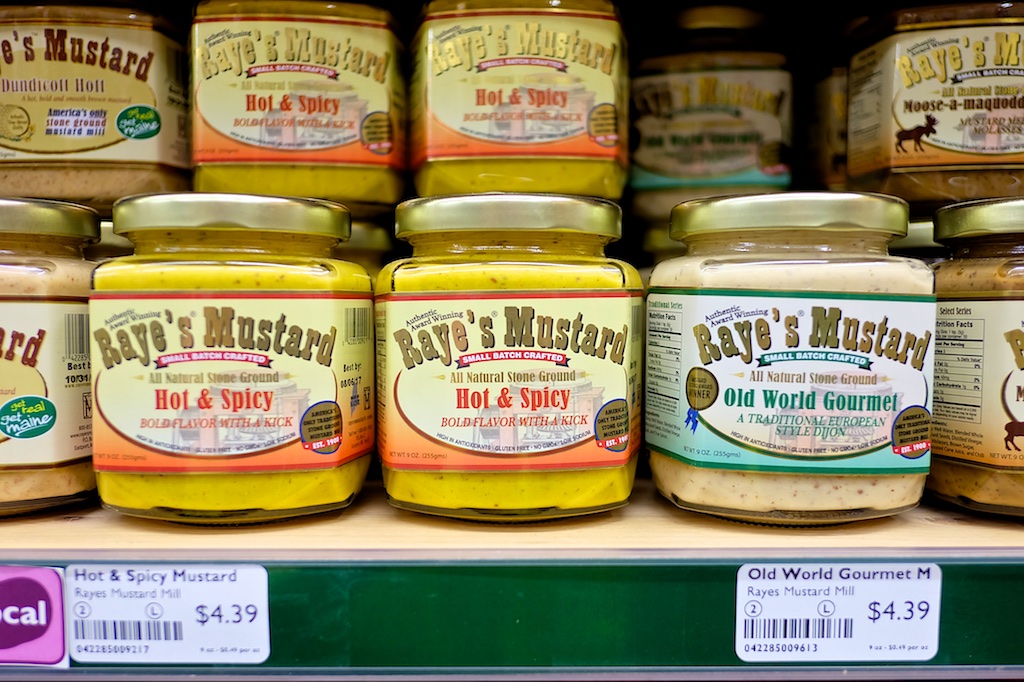 My favorite find were these hand pies called Hotties. A creation from Marble Family Farms in Farmington Maine. They came frozen and in various flavors. I fell in love with the name and the branding. Their origin stems from busy families on the go needing a quick but hand made meal. Food pockets are never a bad thing in my book. 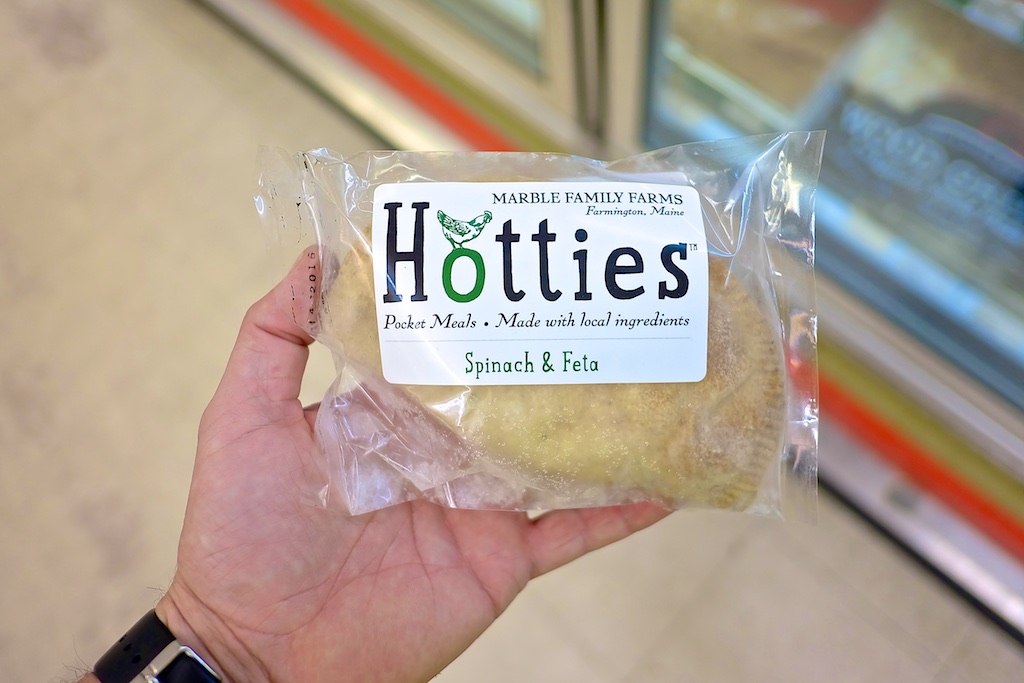 Lunch was the crescendo of the trip. I parked at Young’s Lobster Pound just as a boat was arriving with a fresh catch. 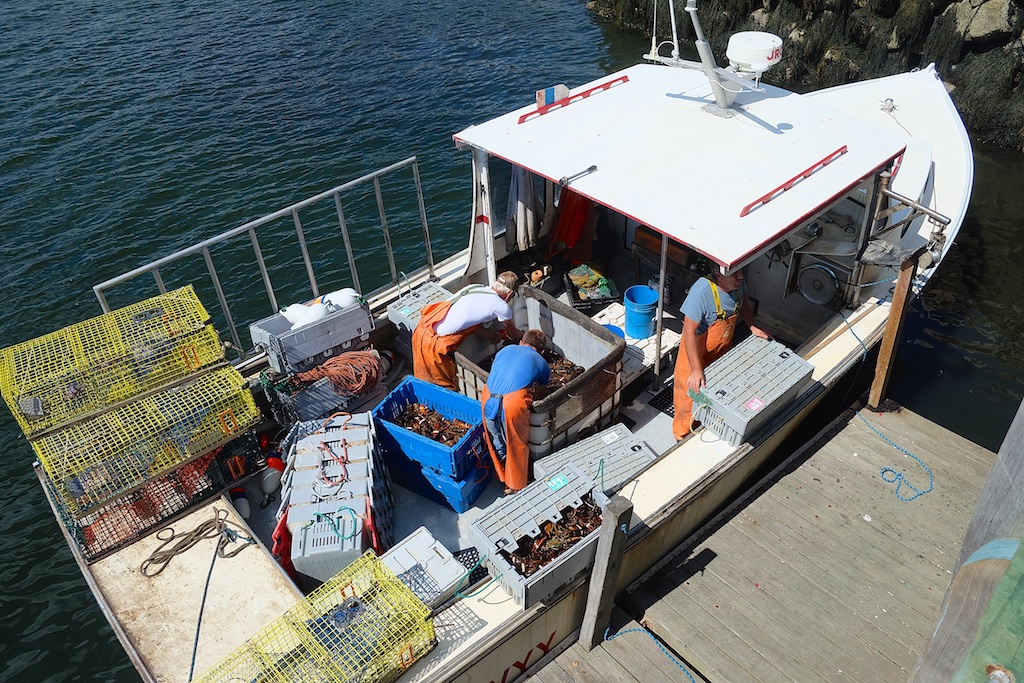 The lobster overload that followed was truly jaw dropping. I knew lobster was abundant from all the stories I’d been told over the years but I couldn’t really understand this until I saw the operation first hand. 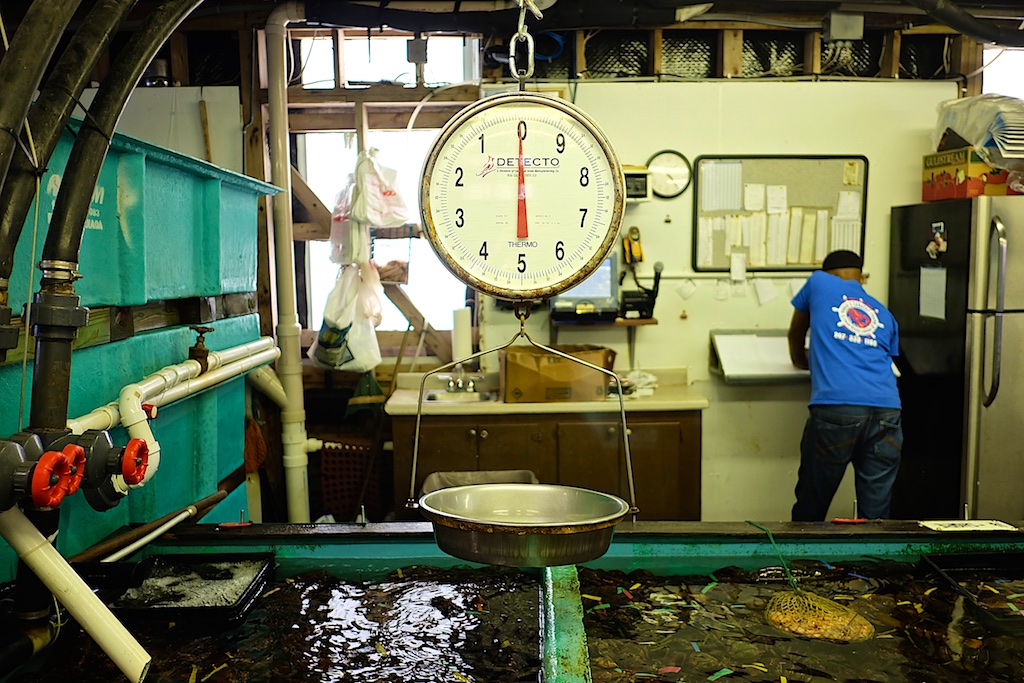 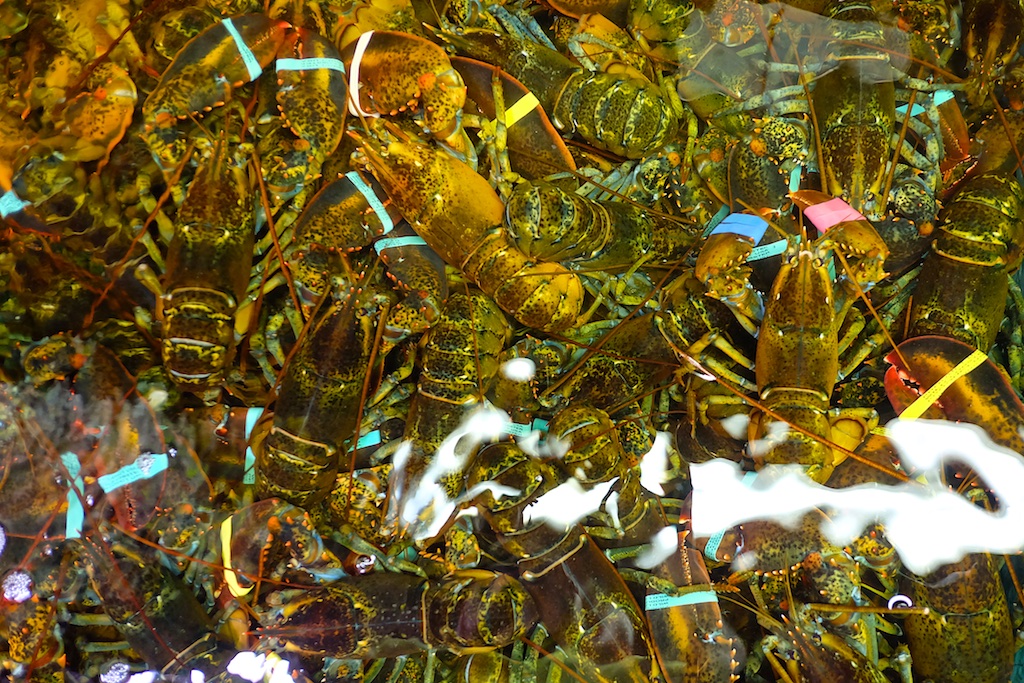 With a freshly caught, and cooked, 1.5 pounder accompanied by a corn in my belly I needed to walk off the butter. I found my calorie burner and favorite coastal view of the trip atop Camden Hills State Park. 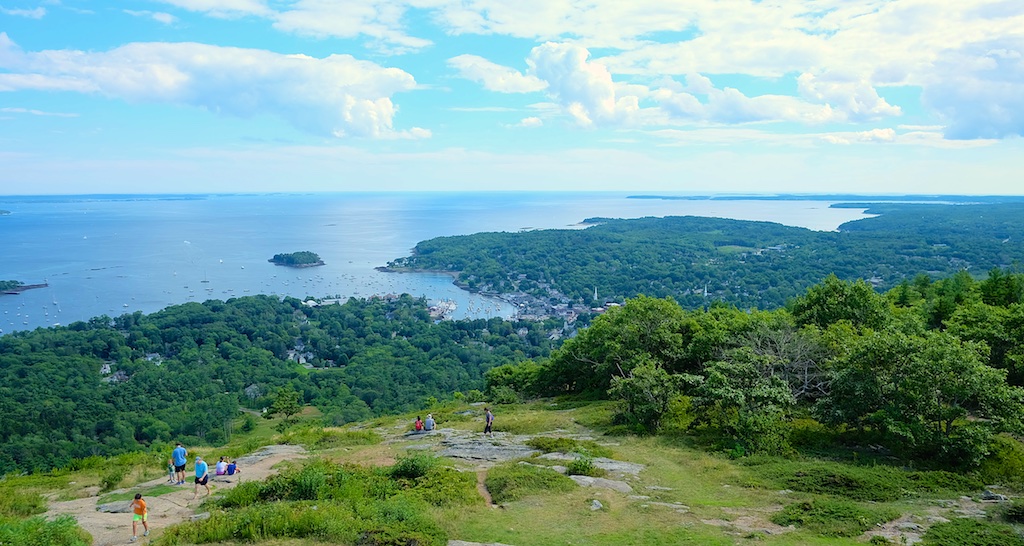 After soaking in the sun and sea air, Day two took me to another few lobster joints as I pecked my way back to Portland. I stopped just shy of Portland for a 3 hour wander through L.L. Bean HQ in Freeport. I highly recommend a stop at this mecca of outdoor things. Even if you don’t like hunting, fishing, camping, outdoor clothes or gear, stop and marvel at the 4 building complex. Oh yeah, They have a 2 story rain boot greeting you at the entrance. It’s a must see. I’ve chosen to keep that visual a surprise for those of you who will visit. Instead this fire station just down the road compelled me to snap the bookend to the Big Al’s photo above. 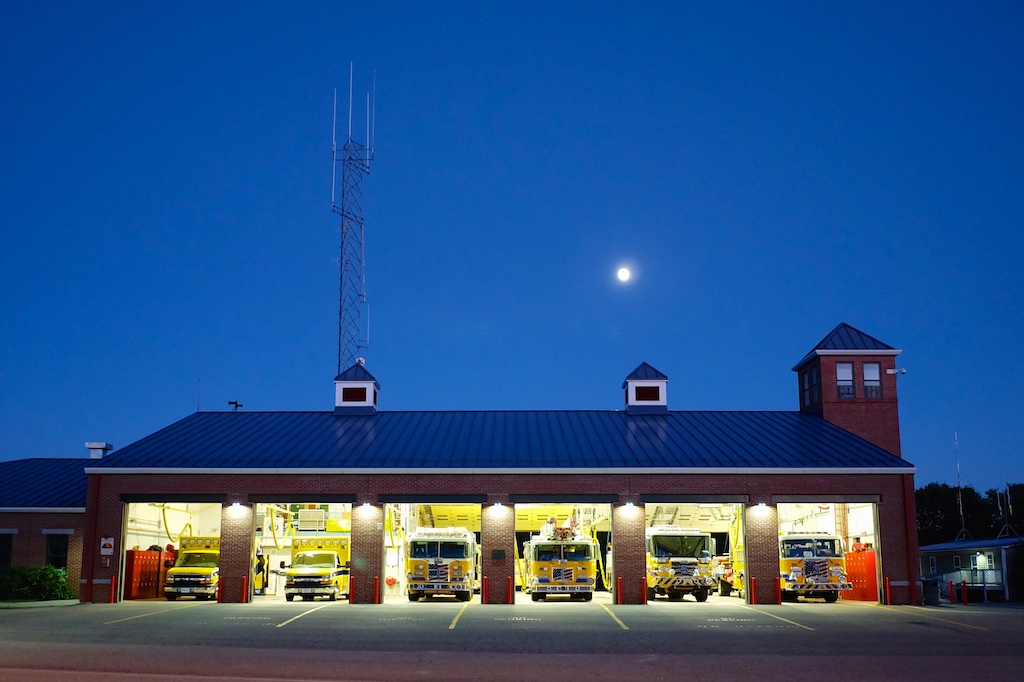 My parting shot, and bite, came in donut form. Little Big’s is a South Portland joint tucked into a strip mall across the street from a gas station. They stick to the basics but mash ’em up with ingredients and flavors slightly less common than you’d expected. When they run out that’s it. In the 15 minutes I was in the shop they ran out of 5 of their 10 sweet options. Although, not before I scored this ricotta filled beauty. 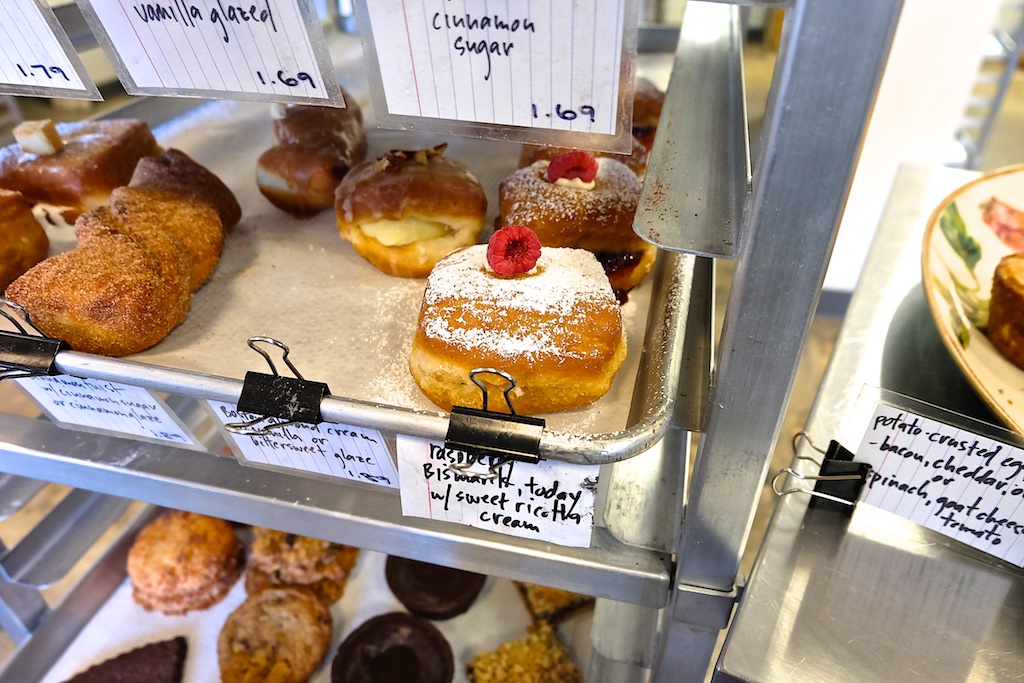 As day 3 ramped up, I hit the highway hopped up on sugar and pressed play on another episode of the Moth podcast. In the zone, I found my head was clearer, my mind was more stimulated and I had a revived feeling of purpose. This reenforced my theory that creativity happens in the spaces between concentration. Hence those commonly mentioned clichéd aha moments in the shower. The truth is, some things can’t be forced but they can be coaxed. Time and stimulation are the key ingredients. But, a couple pounds of Lobster and a tub of drawn butter doesn’t hurt either.

Chowing Down From Kyoto to Kobe Japan

Cricket. No, not for dinner.