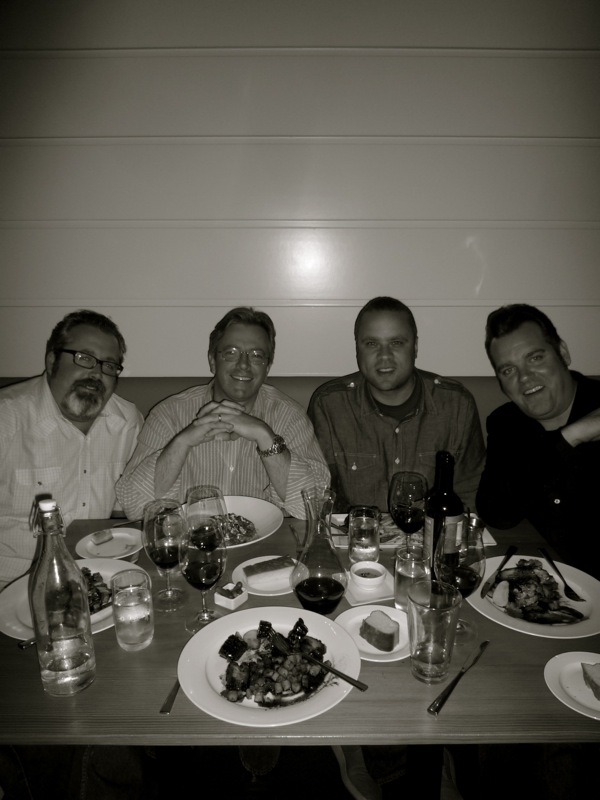 In Texas, they say everything is BIGGER and that includes personalities and food risks. Interesting enough all the guys here are from California. But, we were in Austin so, when in Rome, right? (Well, when in Austin actually. Ahh, forget it).

Brian and Flo are friends and colleagues from the buzz team. These guys are both stand up gents that I would run into a burning building for. Actually, I have theoretically done that several times for each of them. They have gratefully returned the favor. Brian Mullin is a SoCal boy born on St. Patrick’s Day who races cars and raises 3 kids when he is not selling ice to Eskimos. Flo(Sean Florio) is a NoCal kid who’s life resume reads like a Disney casting call. Homecoming king, quarterback for the football team, semi-pro skiier, ideal husband, perfect dad covers the basic milestones. I’ll let Walt and his “idealistic” storytelling fill in the blanks.

Sean O’Connor is my new best friend in Austin. He is a gregarious and fun loving guy that seems to run on full tilt ALL THE TIME, which makes for a quick bond. Sean jumped right in when we were ordering the appetizers, finding the “crazy stuff” to fill our bellies. Having only spent a couple hours with him I can barely paint a proper picture of his person but he clearly knows how to enjoy LIFE. His recent move from San Fran to Austin will hopefully result in more fun for me on my next visit down. Plus, who doesn’t want a tour of the place where a spray can full of pancake batter was created? For me Sean’s company, Batter Blaster, is like mixing good food and street art. Think Banksy meets Emeril Lagasse. The product almost begs you to make pancakes on anything hot; Intake manifolds, blacktop in 100 degree heat or just inside the window on that greenhouse effected ledge in Starbucks.

Nick Tangborn is Sean’s right hand man and a tall, pompadour capped party machine in his own right. Having worked and played in the music scene for years, he has quickly dialed in the disco in Austin.(Disco meaning rock and roll) Walking into the Continental that night was like seeing the mayor meeting his “citizens”. At dinner, he took part in the risk food between Napster stories and pointing out Stevie Ray Vaughan’s brother at the bar.

I love Austin more and more each time I visit. Now I have two more reasons to add to the list. Three if you count Olivia. Thanks guys for treating me local. Brian and Flo, glad we had the time to break bread and whoop it up a bit without any burning buildings in sight.