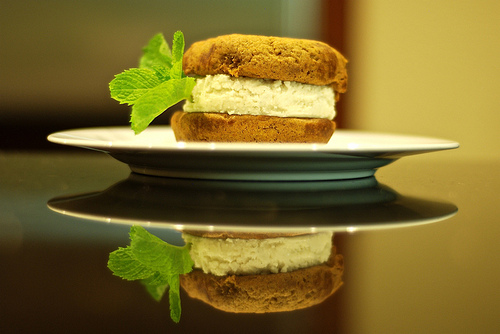 It was our second visit in two days to an out of the way industrial park on the outskirts of Cambria, California. We meandered our rental car down side streets and through alleys following a well marked trail to the Red Moose Cookie Company where we poked our heads through a screened door to meet Caren. She was just finishing up a batch of pumpkin cookies and dropped what she was doing to give “The Canadian” a huge hug. “Look at you!” she said, enthralled by The Canadian’s beauty. “You’re like a movie star.”, she squealed, keeping “The Canadian” in a tight embrace. From the back came Roger to break the moment. We had never met Caren before but we had met Roger the day before on our first trip to the aluminum sided warehouse with the butter based surprise inside. He picked up right where we left him, bringing fresh baked goodies from the kitchen to the selling table.

Caren and Roger were high school friends that reunited 40 years post graduation when Caren developed a debilitating back injury. The two reconnected when Roger dedicated himself to helping Caren rehabilitate after her surgeries. When Caren was fully healed she decided to let go of her day job as a lawyer and follow her passion to bake. Roger naturally followed along side her as the Red Moose Cookie Company was born.

With in a few minutes of meeting them we saw the deep, platonic love they share. That love carried into the business and right into the food. As they begin to explain their products to us the love only became more apparent. By the time they finished describing the available goodies we wanted to taste them all. That’s exactly what was next. Caren leaped from behind the table and started opening up sealed bulk bins containing some of her favorite items. First up was orgasm on a stick, a mix of chocolate, nuts and other sweet edibles. Next we tasted the Peanut Butter Dream which has 10 pounds of extra crunchy peanut butter and 5 pounds of Reese’s Peanut Butter Cups in every batch. After a few more nibbles and bites we decided we better make a choice before we turned into Hansel and Gretel.

By this point the Canadian had lost her mind and was spewing out reasons to buy almost everything on the table. A snack for us, a gift for my parents, her purchasing ideas went on and on. Realizing the sugar had unusually quickly made it into her blood stream I started to make some decisions for the both of us. Knowing we would be cooking dinner for our friends Patrick and Lita that evening, I picked a few specialties for dessert and I told Caren to ring us up. My attempt to constrain the Canadian failed as she added two more bags of cookies to my pile claiming them as necessary road snacks. Finally we were bagged up and with a round of hugs by Caren and sent on our way. It wasn’t but 5 minutes until we jerked the car to the side of the road and tore into the treats. About an hour later we did the same. This progressed until we arrived at Patrick and Lita’s and presented them with their gift, a couple Pumpkin Moose Pie’s filled with a Brown Butter Cream. They of course were now the sole item left in the big bag. So much for self control.