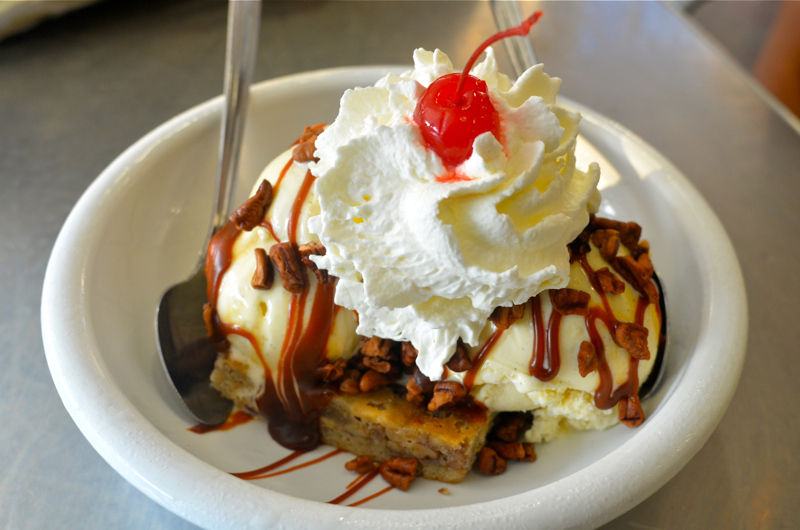 On one of my all too frequent cross country commutes I was bit by the sugar fairy. I know what you are thinking, sugar fairy’s don’t bite. Well mine does and she leaves a mark. I had a little extra time in LA one afternoon and decided to make a Candyland like journey to a small shop with a simple name. MILK sits at the corner of Beverly Blvd. and Poinsettia Place in what, by all visible cues, is the hasidic ghetto. It’s not the place you’d expect to find a progressive, trend setting ice cream bakery. Perhaps that’s part of what keeps MILK an LA secret but then again, I really don’t get LA neighborhoods, so for all I know this is what a “hip” ‘hood feels like.

I had found this piece of lactose heaven while perusing the dessert section of Umami Burger. As Brooklyn has shown me time and time again, any artisan restauranteur brings their desserts in from an equally artisanal resource. Namely the closest, underground, dessert spot. The Ooey Gooey Chocolate Chip Cookie on the Umami menu was all I needed to fire up my iPhones map and see how close this dungeon of dessert actually was.

Walking into MILK you are instantly overwhelmed by two equally dense menus. Ice cream options and baked goods unfold from the ceiling and reach almost to the counter using every possible decadent word to describe their sugar, milk and cookie combinations. A look in the case quickly shows some of the reason for the wordy descriptions. Simplified for the 3×5 card, Cupcake in a Cone kinda says it all. You can understand now what I mean about MILK not just being a dessert shop but a crew of confectionary innovators. Amidst all the tempting options on the menu and in the jewelry case of sweets I made this trip with frozen MILK in mind. Their namesake and my kryptonite. After careful consideration and another snap from my sugar fairy I settled on the Blondie. A white chocolate blondie brownie was hidden by 3 scoops of vanilla ice cream, butterscotch sauce and pecan pralines. Topped with a cherry and fresh whipped cream I realized I had just slipped myself into a diabetics nightmare or a five year olds fantasy. Thankfully, being the latter, I dug in straight away. Sharing a few bites with my sugar fairy she quickly retired in defeat. Having knocked her off the spoon I had the mountain of milk all to myself. Regressing even deeper to rare memories of unbridled childhood I ate as if I had 2 spoons and a twelve inch mouth.

The mix of the ice cream with the crunchy pralines and the thick gooey butterscotch sent chills down my throat as if to alert my stomach for the richest morsel since that Warren Buffet Easter chocolate. As I made significant headway through the crustacious layer of the sundae I hit my first chunk of blondie. The brownie was still warm and denser than my Uncle Paul’s pompadour. It was baked to a perfect, crispy shell with a tender, rich center. Loading up a second spoon, this time with a proper proportion of blondie, ice cream, whipped cream, praline and butterscotch, I placed the perfect bite on my tongue causing a reaction that can only be described as euphoric. Apparently I had slipped into a slightly spastic state as I caught a look of humiliation from the sugar fairy. Without words she told me I was making a spectacle of myself and I needed to calm down before we were asked to leave, or worse, arrested.

Hitting the bottom of the bowl a few minutes later I figured it would be smart not to linger. Plus, any type of physical motion would only do my milk cream laden body benefit. With easily over 2000 calories in my system energy burning could not be a bad idea. Not to be foolish and always thinking ahead, I slipped an Ooey Gooey Chocolate Chip cookie and a Snicker Doodle cookie in my pocket for a late night treat. Now, that might seem completely over the top. Trust me. I know my sugar fairy and she’ll be up for the surprise snack. She never was preferential to Blonds.