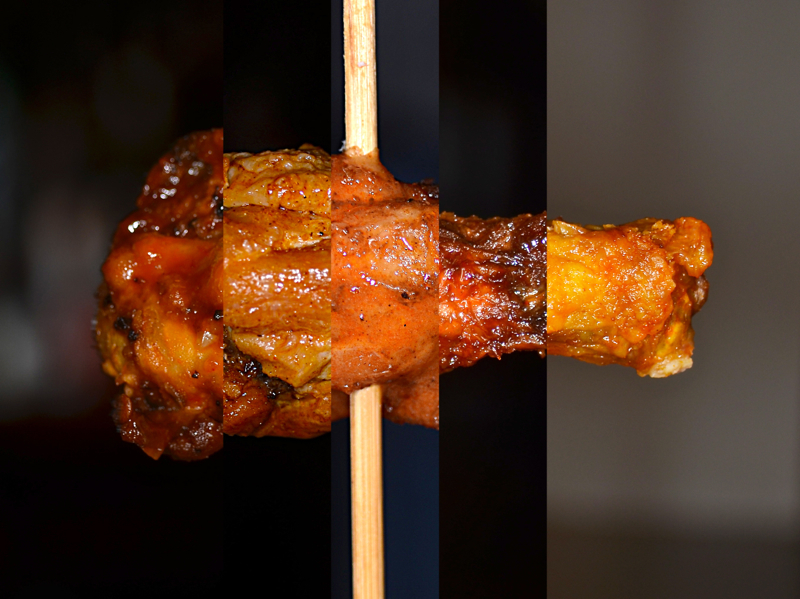 Last Saturday Anthony and I were privileged to be invited, for our third year, to the annual Best Wings in Brooklyn competition hosted at Red Star Bar. This year we took a different approach. We decided to get a little clever with how we showed you each wing we are about to critique. We wanted to give them all an equal chance to shine and to do that we needed to devise a way to put all the contestants on a level playing field. We thought our skewer idea was a pretty cool way to achieve this goal plus, it allowed us to create the awesome frankenwing lead image above.

The contestants were back in force this year with a few newcomers in the mix. As usual, the line extended all the way down Greenpoint Ave. curving around the corner to Franklin at moments. That’s a long block and with the addition of some big boy wind gusts the wing loving line stood strong (500 deep at least) to get a FREE taste of Brooklyn’s best.

We thankfully tackled the competition and avoided the wind pre-doors allowing us a less crowded Red Star to chat, taste and shoot these luscious flappers. So without further preamble here are the contenders, our thoughts and, at the end, a video revealing our favorites. Ant: This wing was good and I kind of wish I had another wing to give it a fare chance. This was a dry rub wing that had a great crunch to it when you bit into it. The flavor was good but they come in 4th for the day.

J.: A pretty wing. One with a solid crust but had that odd breaded texture. Not that that’s bad but it pulls it a bit away from the pure Buffalo style. Ant: This is a mix of a BBQ and Chipolte Wing. These are really tasty, very meaty, and have good crunch. They are a close 3rd for me this year.

J.: Ant summed it up well, the hot and sweet mix arrested your tongue in a very unique way causing a delightful confusion. Ant: The Rasberry Wings at Red Star Bar are fantastic. Last year they had me at first bit. They have it all, great sauce, big meat, good crunch.

J.: One of last year’s favorites and a neighborhood staple. The raspberry sauce is always a nice surprise. Loving classic Buffalo style can be a curse for me BUT I appreciate a wing that plays on the original. A sweet raspberry sauce instead of a butter and red hot is a nice twist. I always love Red Star’s name sake. Ant: Love this Wing. The Bayou Wing is a little spicy, big meat and made in southern confort. They get me every year. The flavors they make their wings with bring a different type of wing to this challenge. I know I’m getting a good wing at Bean Post

J.: Meaty! Moist! Booze! Need I say more. Ohh, but I will. Bean Post came back this year with a SoCo wing. This is again a play on the classic Buffalo but with a great twist on the sauce. If there is a wing in this competition I could eat weekly, it would be this one. Get to Bay Ridge immediately! Ant: Life Cafe didn’t tell us much about the wing other than it was a brewed buffalo wing. It was ok for me. There really was no flare to the wing for me unlike some of the other shops.

J.: Last year’s big winner was not that successful for me either. Priding themselves on their sauce, which is amazing, it didn’t set them apart enough or nail the classic Buffalo. I think the goal in a competition like this is to make the BEST classic wing or twist it up enough that Buffalo doesn’t even enter your mind. Ant: I wish Bonnie’s grill had stepped it up a bit. They brought your classic medium and hot wing. Good wings with that classic taste.

J.: Ant hit it on the head. My suggestion. Change nothing except the chicken you use. Go BIGGER and BETTER. You’ll own us next year. Ant: The Brooklyn Wing Lady’s were fun to be around and their wings were tasty. This was an Asian fusion wing with some good flavors on an average size wing. I liked the glaze and the color of the wing. Two of the Lady’s were from Panama and would not give up any secret ingredients. We tried to pry it out of them but they wouldn’t give it up.

J.: This wing did jump out as different and has a good story. Story helps believe it or not but I found them a touch dry and left wanting more of the unique flavors. Some flavors were just a hint and I had to work too hard to find them all. Ant: The ginger buff that won the compitition the 1st year made it back for the 3rd year. They are always a good combo of great sauce, good spice and flavor. They also brought a Pinapple Jerk which was a bit spicy as well. I liked the cook of the wing but I need more sauce to win me over.

J.: I disagree with Ant on this one. I liked the lack of sauce on the pineapple jerk. Part of a great carribean dish is mixing hot spice with sweet fruit and this wing succeeded in doing that perfectly. Our lovely judges panel centered by my good friend Liza chose Super Wings as this years grand champion. That’s two out of three for the Crown Heights crew. The crowd favorite was Red Star’s Raspberry wing. Not a bad thing for our hosts. Nice work Eric and crew.

For those without video viewing ability, we both hands down deemed The Bean Post the winner this year. Now get off dial up and order some broadband.

Forked with Santosh and Shital