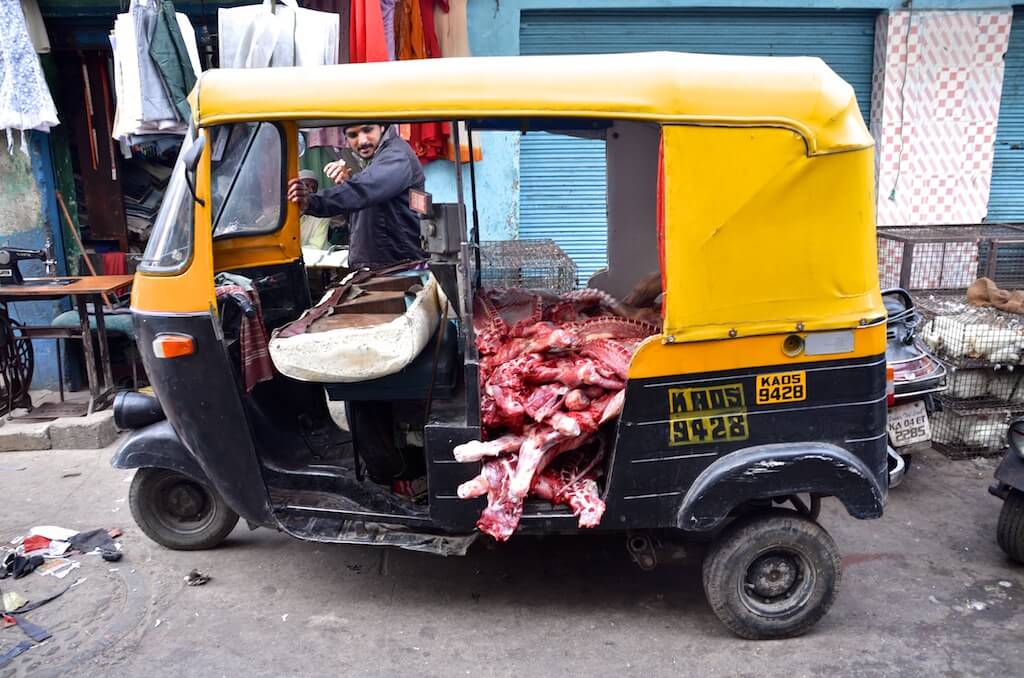 This is really two stories in one. The tale in words is first and is maybe one of my favorite moments ever experienced abroad. The second story is more visual and is a pictorial journey through the market that was the setting for my first story. I woke up very early one of the days before the wedding and hopped a rickshaw to the oldest open market in Bangalore. It was started in 1927 by the British and named for the, then Municipal commissioner, T. B. Russell. Sections for vegetables, fruits, meat and poultry are segregated and have different entrances including an entire building for just beef. This segregation of beef from the other meat is necessary because of the co-existance of hindus and muslims. That’s why this first story is called. The Muslim, The Hindu and The Cow.

It was no longer early morning and my self-guided tour, depicted below, of Russell Market was nearing it’s end.

I was walking up a street that ran parallel with the disheveled, prison like, concrete facade of the main market. Although I had a full view of the market building, a bit of distance separated me from it. About 50 feet off the market facade was a line of vendors selling vegetables and a small, 3-foot, concrete median. It was just wide enough for the proprietors to set up lounge chairs to sit in front of their stands. I was walking on the opposite side of the road from the median, about 120 feet from the market facade. On my right was a series of small shops selling everything from cigarettes to hindu idles. Amongst the market convenience stores were several chai shops. The shops are an expected necessity in an area with so much working class hustle and bustle. There is always a place for a quick coffee break, no matter what the city or country.

As I continued to weave up the road in between the parked tuk tuks and wagons of the chai grabbing workers, I took notice of a older man sitting in the window of one of the chai shops. He was sipping on a piping hot cup of tea. As I pondered how he wasn’t burning his weathered lips I was lost in my own head with thoughts of market food and Indian life. I noticed him because the sun had just peeked over the tall facade of the market and cut through the window like a knife through ghee. It  illuminated the cup and steam that the old muslim man held off the counter as he prepared for his next gulp. I knew he was muslim from his clothing but like much of the markets segregation, the chai shops followed suit. I had already realize a few minutes earlier that this was a muslim chai shop and that the hindu owned stand was further down the road.

I glanced back towards the road. In front of me were several tuk tuks which required me to step out into the road to get past. As I did this I saw a large, emaciated cow walking towards me. She was about 50 feet away and I reveled in the way animals walk the streets, much like people in this city. She slowed her pace and in an unexpected move seemed to make herself smaller, lower and slink towards one of the tuk tuks. Hanging off the far side of the rickshaw was a large basket of apples. She looked at me with one eye while the other guided her tongue into the basket to retrieve an apple. Gulped down with a small head bob, she went in for a second and then a third.

Hidden from the chai shop by the curb and the tuk tuk, the cow might as well have been the size of a squirrel. The old muslim man drinking the chai wouldn’t have had a clue his market bounty was being poached by the holy beast if it were not for her overzealous tail which swatted the front and top of the vehicle with every apple gulp. I had no idea that the cow was eating from the muslim man’s apples until he dropped his chai and ran into the street to stop the gastro thievery.

Across the road to my left, a group of Hindu vegetable salesmen stood in a circle dividing up the days profits and the rest of their unsold bounty. The men we’re huddled and in serious conversation. You could hear lots of muffled conversation with the occasional outburst which accented one of them pushing their point to the others. They seemed completely oblivious to the bustle around them nor did they seem to care to acknowledge it.

The muslim man was now in full stride running out of the chai shop. Cutting in front of me, he came around the end of the tuk tuk, arms raised, grasping the daily paper in one hand. The cows eyes widened as she slurped for as many final apples as she could reach. A whack to the head with the paper followed. A second whack to the neck along with some choice words I didn’t understand by definition but that were very clear in tone. A third and a fourth whack finally got the bovine opportunist to retreat. As she navigated a turn away from the apple basket, while back stepping, the muslim man got off a few more whacks to her head. As she was starting to run off one of the vegetable vendors, who had broke his concentration with his fellow merchants, came sprinting into the scene. The man’s hand was raised, a similar newspaper in his grasp. With a swift swing the hindu, vegetable farmer whacked the muslim man while yelling at him in a tone a father does a son. As if to say, “You know the rules. Why are you breaking them.”

The problem in all of this, which is why I loved this moment so much, is that all three parties were playing by totally different rules. The beauty in this frightening and angry moment synthesized the diversity of living beings, human or not, and the cultures they are participants in. For me, this moment punctuates the reason I have such passion for exploring the earth.

By the time I passed the apple basket harnessed tuk tuk, the cow was far down the road. The hindu was headed back across the street to his stand and the muslim had just finished checking the damage to his apples before he started to return to his, now cold, cup of chai. All four of us proceeding like the entire episode never happened. I can’t speak for them but, I know, I’ll not soon forget about those 5 incredible minutes that interrupted the otherwise serene end to my journey through Russell Market.

It was very early. My tuk-tuk ride through Bangalore was smooth and traffic free, an unusual occurrence for the city. I was that early. Many were still asleep. As I reached the market I saw those who were awake in full swing. A bustling series of buildings surrounded the center square. 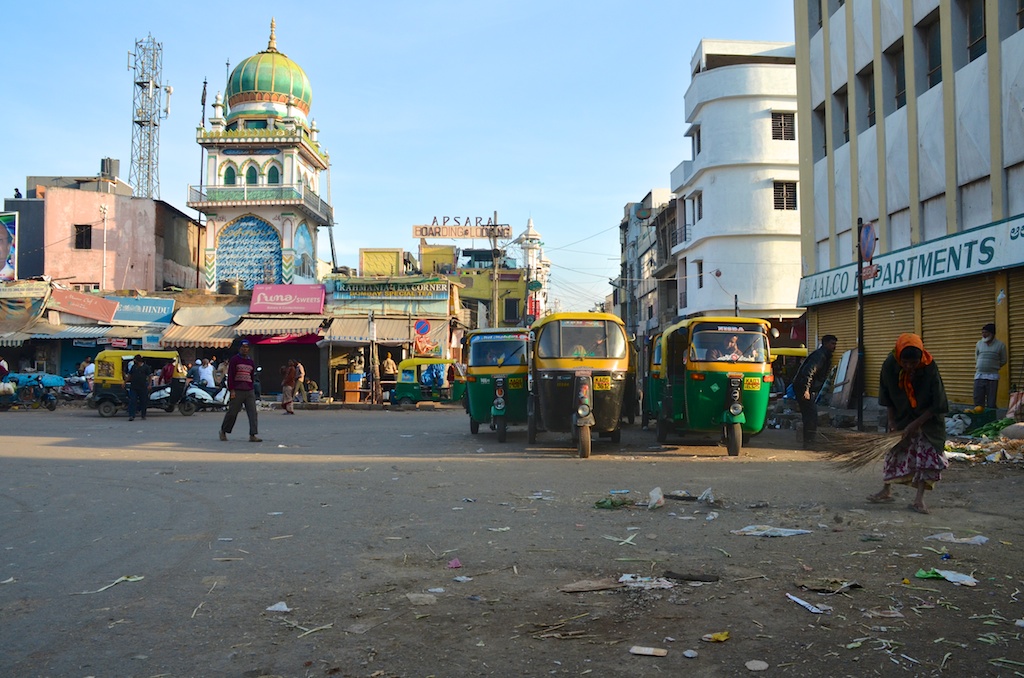 Outside the market I surveyed the scene before ducking down one of the alleys to start exploring. 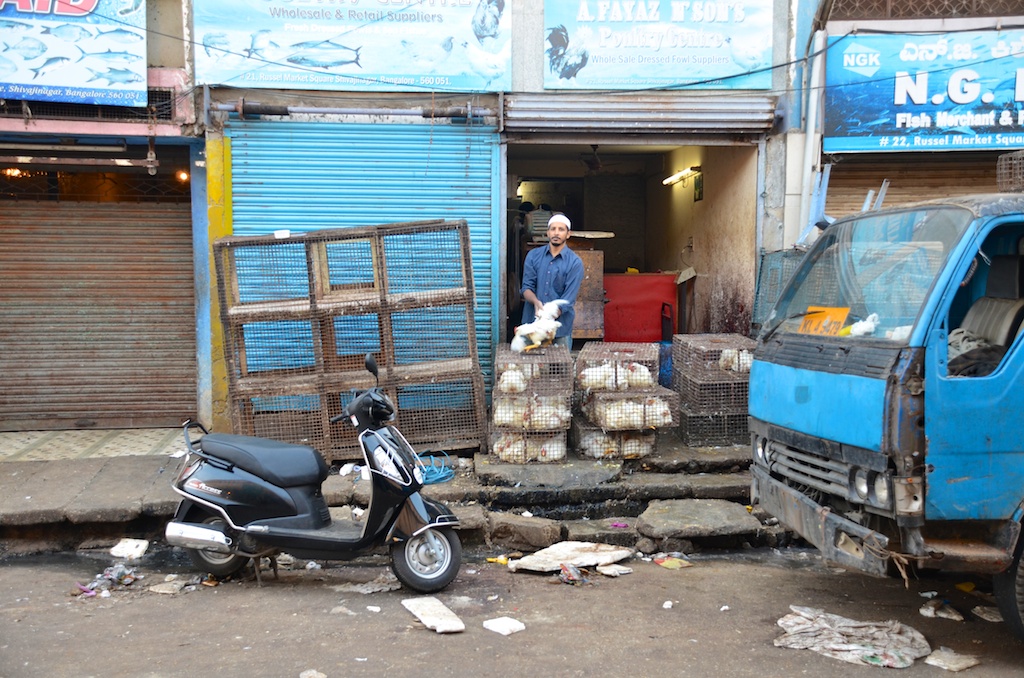 The first alley was the poultry street. Shop after shop and truck after truck of chickens lined the streets. Feathers flew around in the breeze from flapping wings as chickens were pulled, stuffed and thrown about. 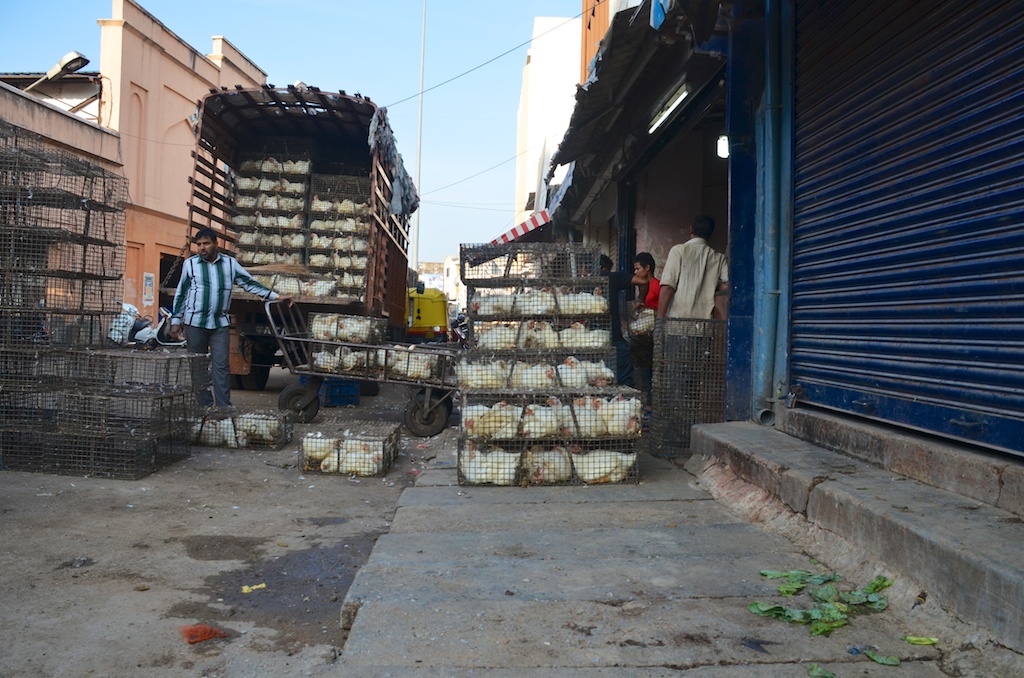 Getting ready to haul all over the city the crates were brought from inside the shops and stacked in front of waiting trucks. 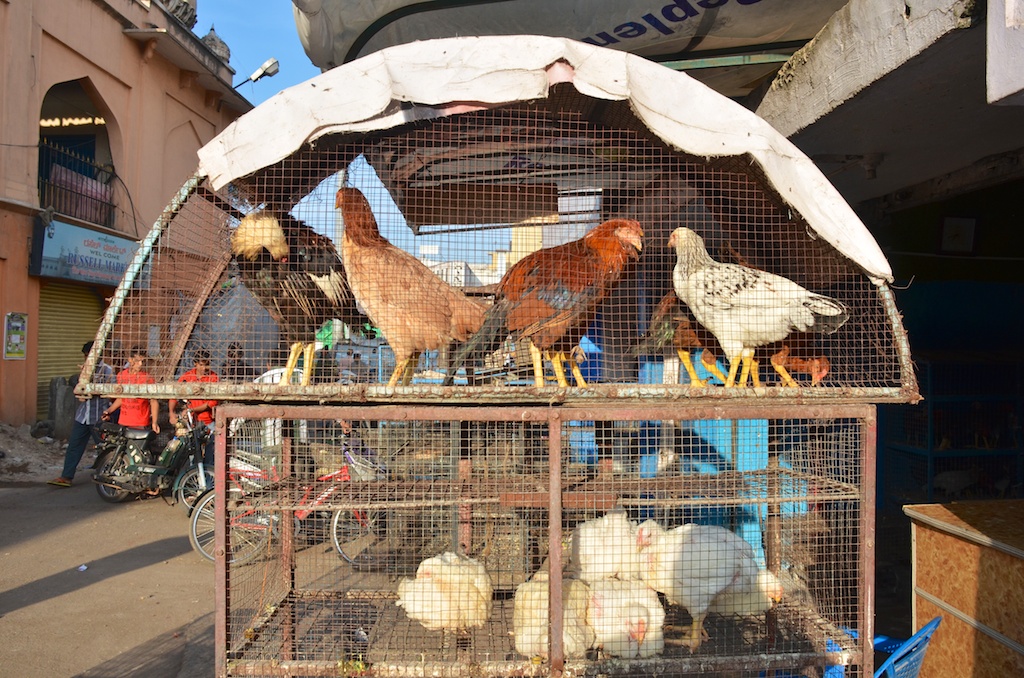 Some shops had outside cages to promote their best birds. Like a marketing tool these beauties drew in the truck drives to make deals with the shop owners. 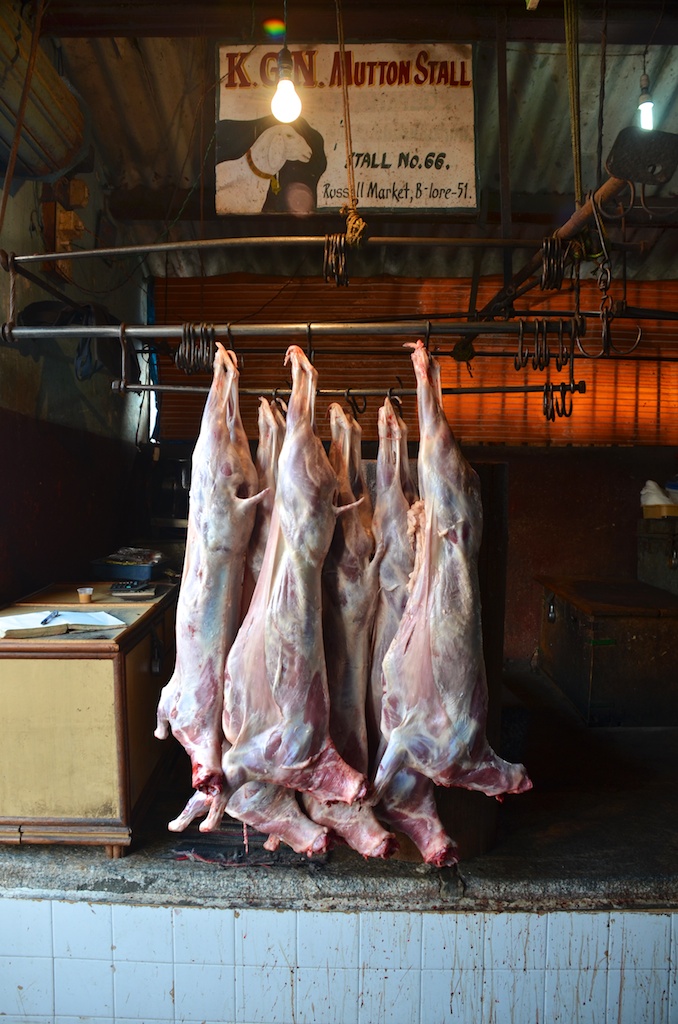 The chicken alley lead me into one of the main buildings. Lamb is a staple in India. Here it hung, freshly killed ready for purchase. Stall after still of headless meat that hung like it was still warm. 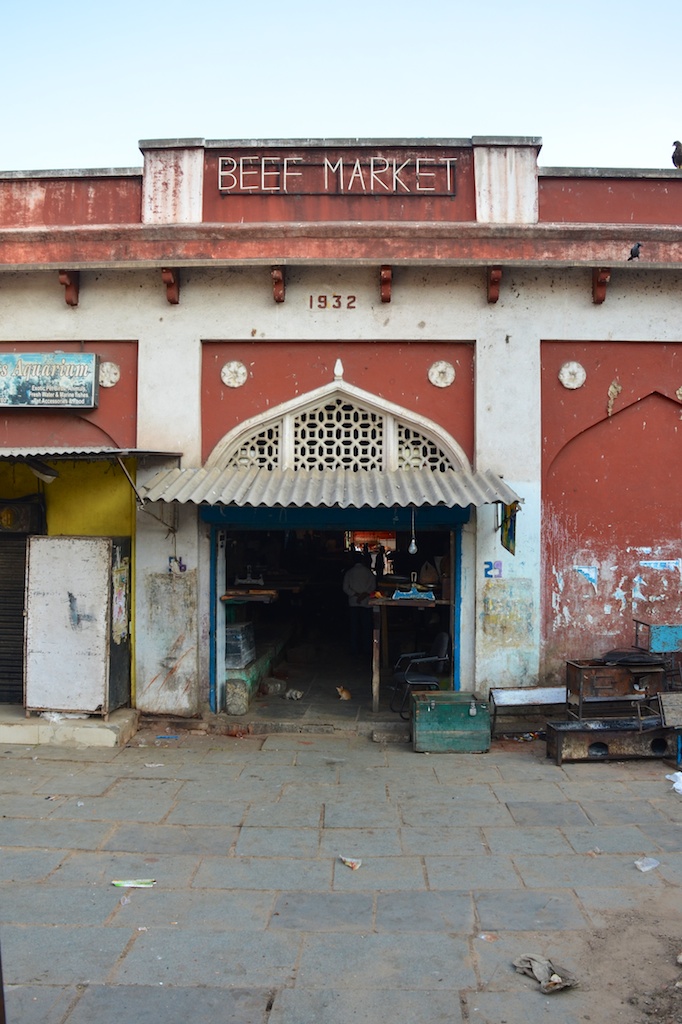 Eventually I exited that building and and found myself at the entrance to another large cement structure. Hindus and muslims play by very different rules but they live in close proximity to each other. As depicted in my story above, this sometimes doesn’t work out. Of course a separate market is required to satiate both religions needs for, or against, the consumption of beef. 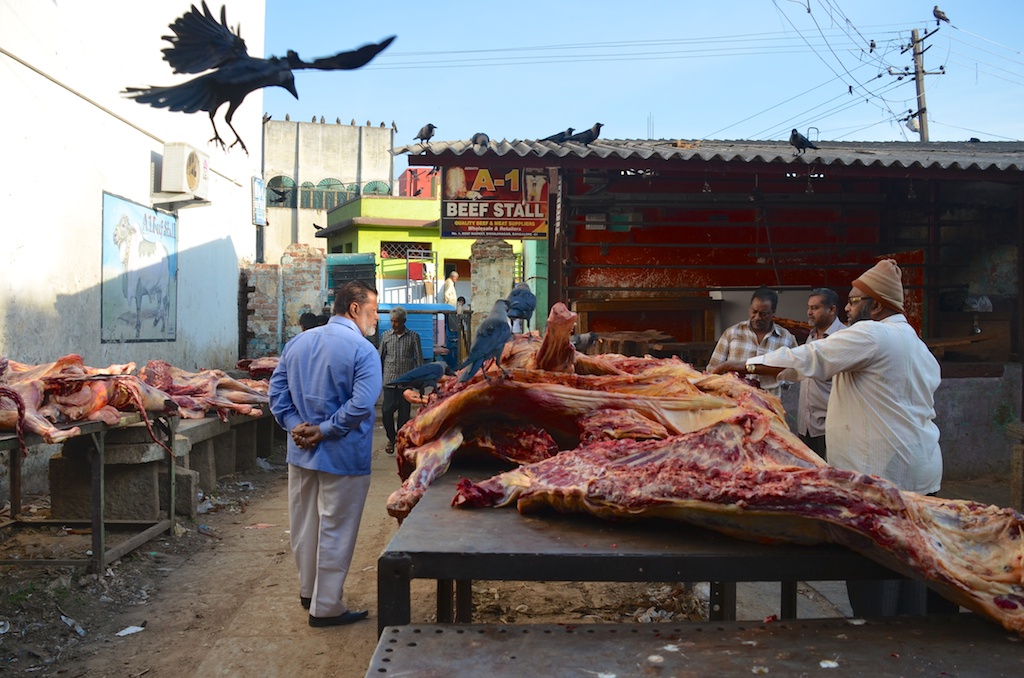 Inside the beef market buzzards and crows swoop down onto the meat to pick as vendors do their best to swat them away. 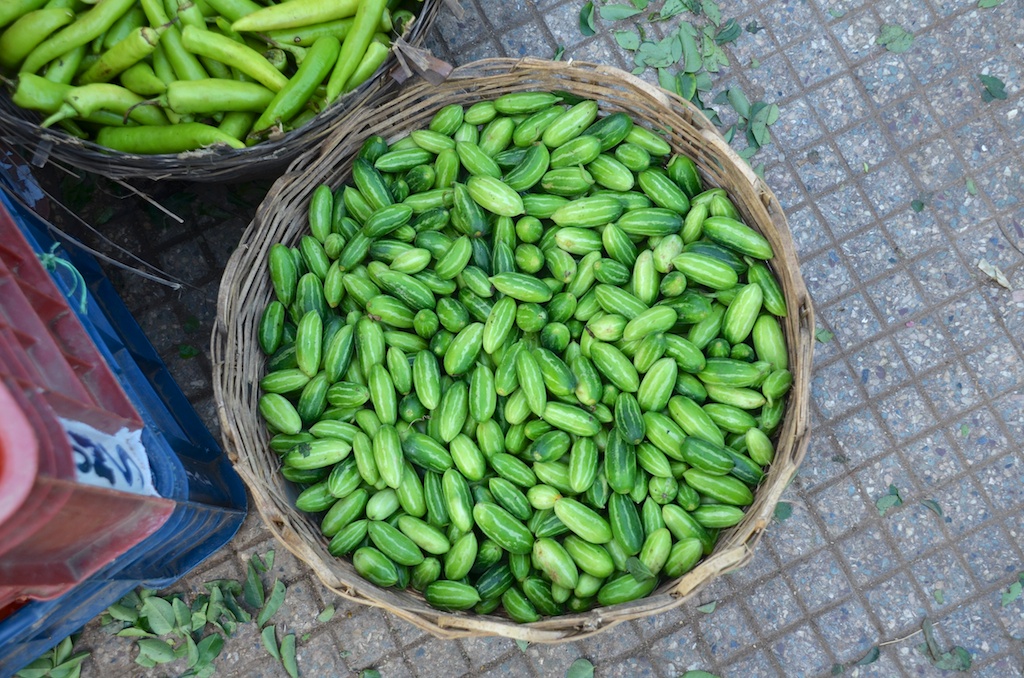 Of course there is an entire building and several alleys dedicated to veggies. Fresh picked and hundreds of varietals. 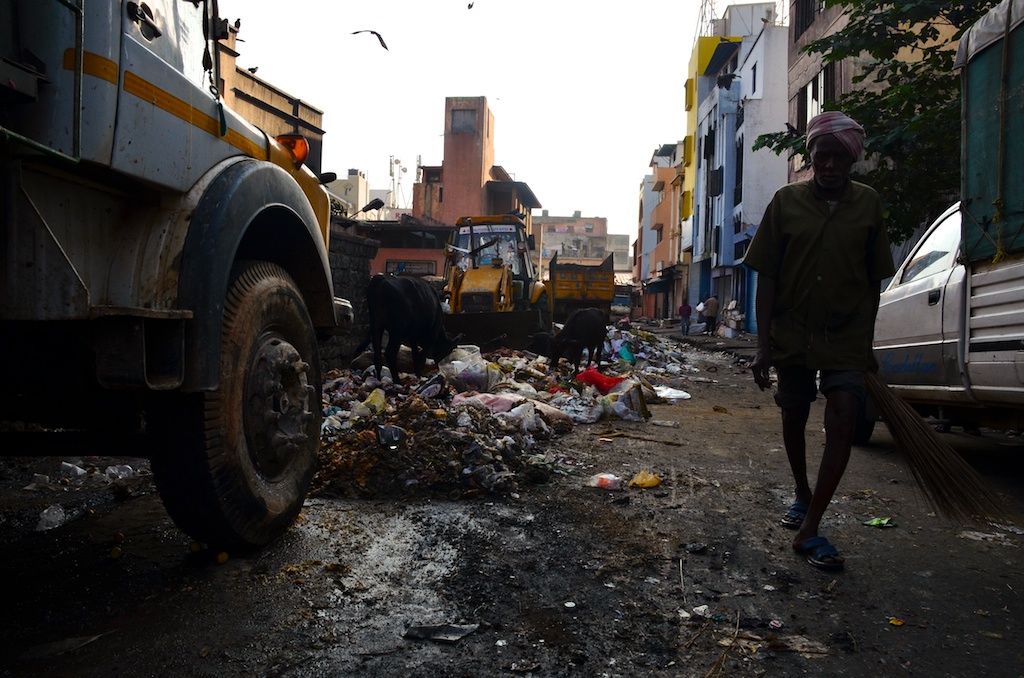 I wandered far behind the scenes in the market at one point. Not something for the faint of heart. Although, I’ve seen this same trash pile in every market I have visited in India. It’s par for the course with so much food buying, selling and eating going down. The shame is the mixed plastic and non-edible parts of the mound the cause the animals to root around for the food. Many times they get some plastic with their bites making for major health problems in already stray animals.

With that, I decided to head back to the front of the market which brings us to the beginning of the above story. If you skipped it, it’s probably a good time to scroll back up and take a read. This market trip was one of my favorites of any city I have explored. I melted into the landscape and was able to travel at will with little scrutiny from the locals. When that happens it always makes for a more authentic and enjoyable time. Nothing is better than having the opportunity to observe everything as a fly on the wall. As much as a white, Italian-American kid can be invisible in India, I was.