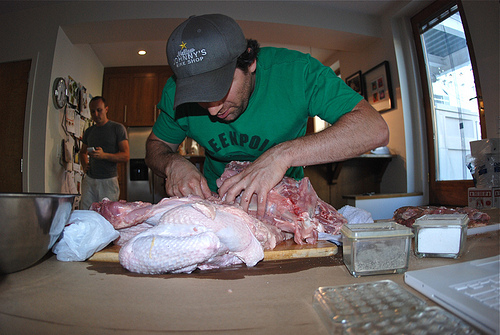 You thought it was a myth. Worse you thought it was impossible to make. Well, you were wrong. Dead wrong. Here’s how to make turducken. This past Tuesday Aimee, Mark (a good supperclub buddy) and I took on the task of making a turducken from scratch for the Gastronauts. The Gastronauts is a club for adventurous eaters who explore the astounding variety of global cuisines in the far, and near, reaches of NYC. Their reason for being is very similar to ours. It’s just as much about the company as it’s about the food. So, when they asked us to host a dinner on the deck we were overjoyed.

The theme was Creole/Cajun cuisine. We had the standards; Jambalya, Crawfish Tails, Cracklins, Black Eyed Peas just to name a few of the 12 plus dishes. To add to the NOLA effect the mercury jumped to 103 that day setting records. The full review of pics can be found on the Gastronauts site. I thought I would chronicle the turducken steps below so you can see what a massive undertaking this was. Just to put your head in the right place we started with a 5lbs chicken, a 5 lbs duck and a 30lbs turkey. The first thing you need to do is debone all the birds WHILE keeping it whole. Here we go.

Step 1: Get some poultry

Step 2: Debone the duck and the chicken Step 4: Layer and stuff. Each layer gets a different stuffing. Step 6: Bake it for a REALLY long time Step 7: Cool it and slice it Step 8: Enjoy a cross section of three birds and three stuffings in one bite Of course there is more to this than the few pictures above. For those of you who want to see the full shoot below is the slideshow of the entire process from multiple angles, start here.