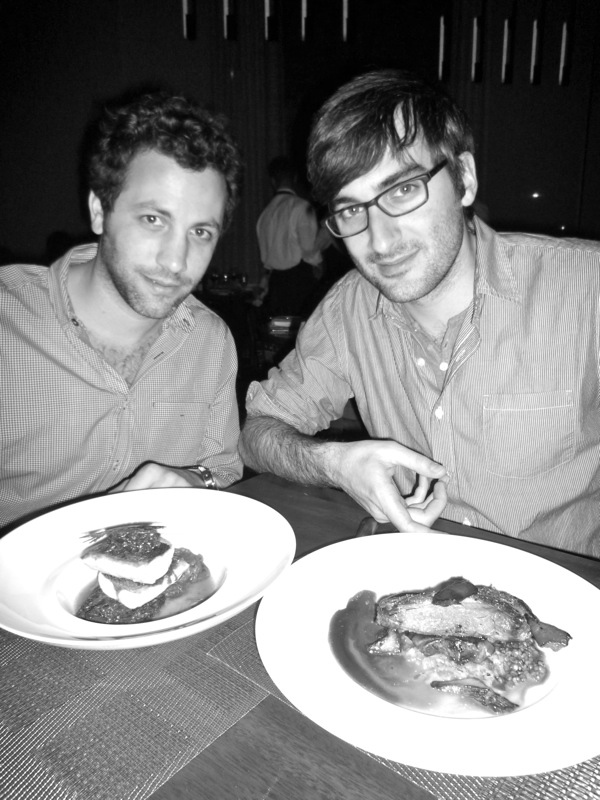 With in the first five minutes of meeting Chris and Andrew I felt I’d known them for three hours. Three solid, carnivorous, men-hanging-out-talking-food-smack hours. And, that is precisely what followed. Let’s back up a bit.

NYC sees a new restaurant open ever day. In this mid-recession restaurant boom, which defies rational economics, these newbies try everything from a celeb chef to locally grown everything just to occupy a little mind share and influence choice. This has left my mind scrambled when it is time to actual choose a restaurant. What happened to the simply days when we would thumb through a slim, burgundy book and reserve a table for 2 with a telephone call? Enter the internet and everybody-is-a-foodie craze. You can’t open a magazine, a browser or a television without some new, hip joint claiming to be BETTER than the best meal you ever had.

Chris Stang and Andrew Steinthal have brought me back to the days of Zagat bliss by giving me one stop for all my NYC restaurant needs. Through their fairly new site, Immaculate Infatuation, they give me the non-foodie run down on such over hyped spots as The Spotted Pig and Char No. 4. Chris and Andrew come from the music biz. The site was born from the sheer number of restaurants they ate in while entertaining clients and bands. Deciding to put this experience to use, they started writing basic, human, reviews of the places and foods they consumed setting the “Infatuation” on fire.

A few weeks ago I met up with them at Tom Colicchio’s refurbished Craft Steak spot, Colicchio and Sons for a prix fix throw down. In those first five minutes I mentioned above, one of us dropped an F-Bomb, we jumped through four different conversation topics and it was determined one of us would NEED to order a diet coke. (a test to Tom’s very public endorsement deal for the beverage) Quick friends are made from those with similar passions. In this case talking to people and eating. After the meal it was clear that we had the same opinion of each other and of Tom’s NEW restaurant so we decided that more Immaculate Infatuation/Forking Tasty chow downs were in the near future. Until then I will simple pick from their ever expanding list of reviews and  block out the hundreds of PR, money driven, in the know, swank, green, sustainable, celebrity-hyped reviews that give me more A.D.D. then an ex-vegetarian at a hipster butcher shop.

Thanks guys for simplifying at least part of my life. Now if I could just figure out my overstuffed inbox problem.

The Next Best Thing To The Great Barrier Reef

A Flight to Venezuela