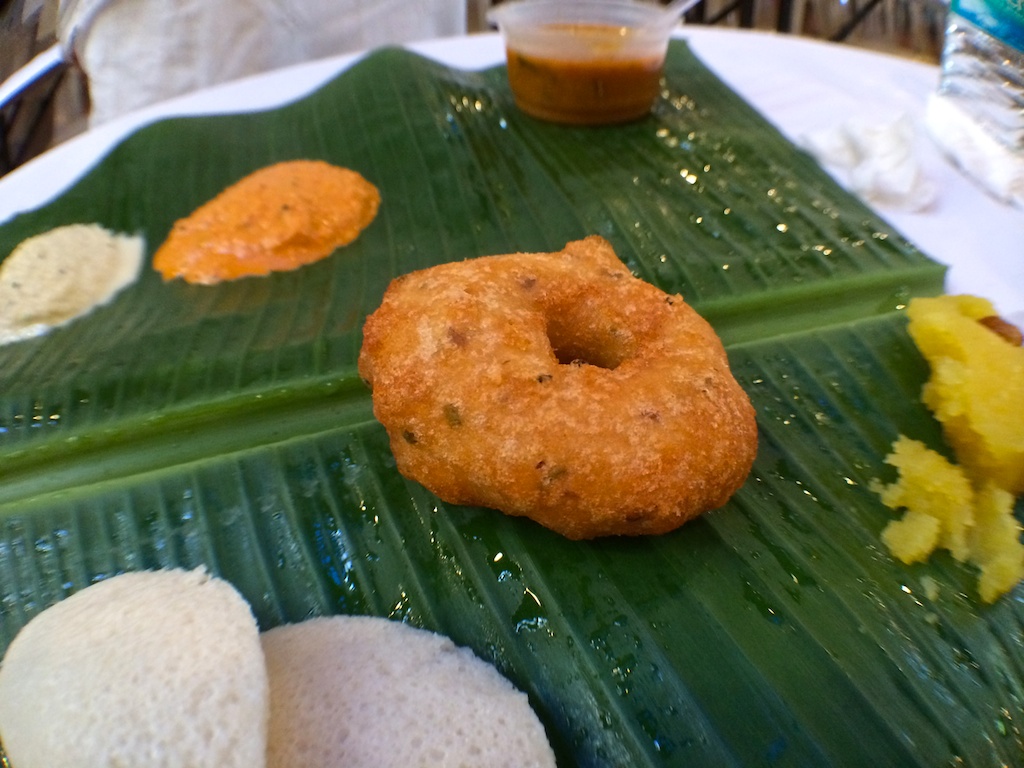 Not really bells at all BUT today marks the anniversary of the reason for last year’s epic India adventure. Having never officially told the story of the only Indian wedding I have attended that was actually in India, I’m taking this anniversary to share some of the awesome. Straight off holiday with my Amsterdamian sister and brother, the bride and groom, doesn’t hurt for jarring my brain either. A good dose of family brought back lots of memories of the fantabulous, delicious, auspicious day. It was three days really, but we’re going to skip the haldi, mehndi, pre-dinner (milni), arrival party (baraat) and ALL the wedding attire shopping parts. Not that they are uninteresting, just that they could fill a post all by themselves. The food stories alone could fill a weeks worth of posts as indicated by the photo below of the beautiful and full bellied couple. 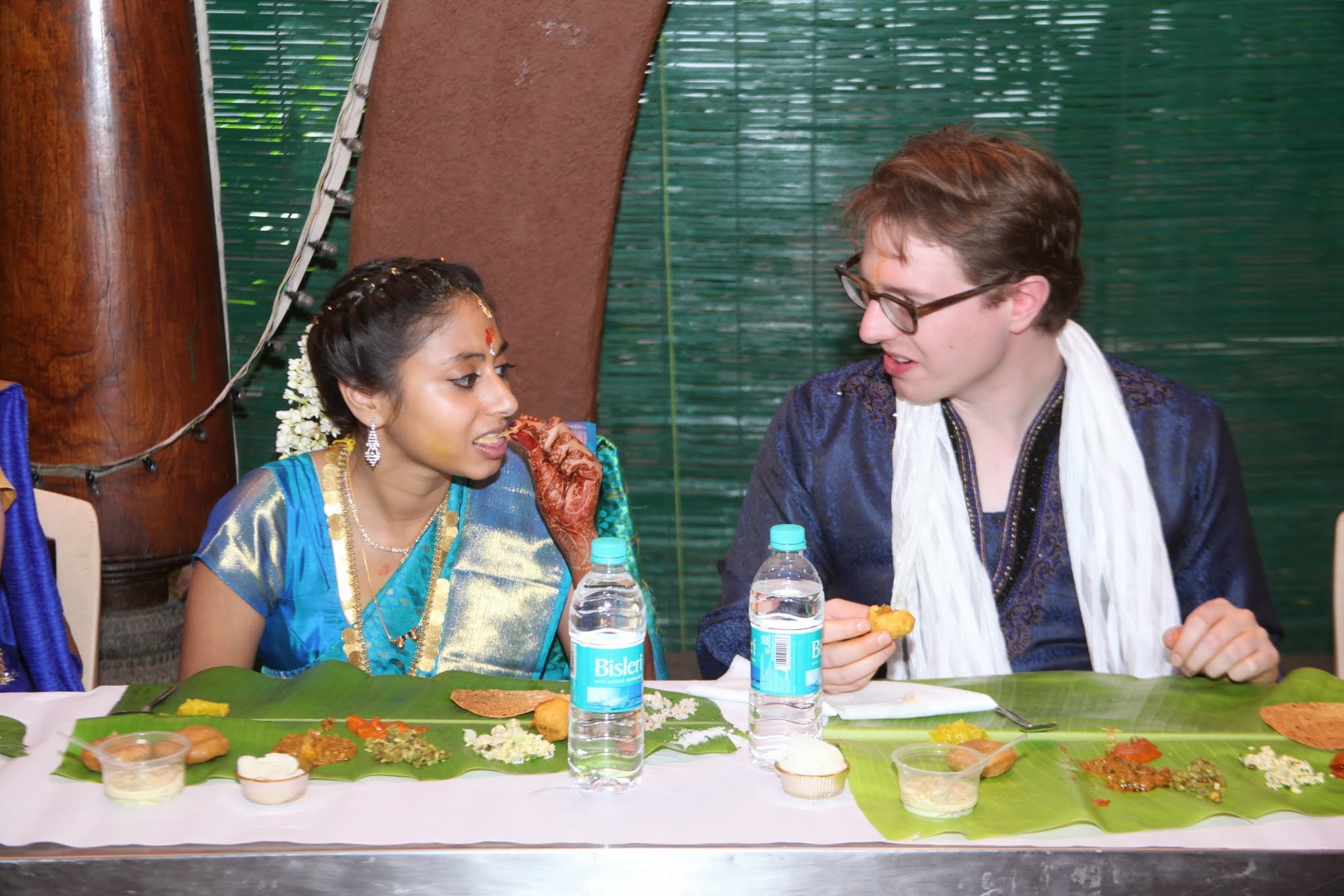 Let’s start at the middle since that seems to be foreign, just like the ceremony in comparison to weddings most of us stateside are used to. This is South India so there is A LOT of rice. Rice to eat, rice to bless, rice to throw and rice to dump on each other. The moment below was one of many but I think it encapsulates the 3 hour ceremony perfectly. I should say now, Hindu weddings are by far my favorite to attend of all religions. The stimulus and flow are like none other. So, let’s break this down a bit.

The white guy is my brother-in-law (Bob). That’s probably obvious if you put together the above Dutch reference and Missus Tasty’s background. He’s pouring a double fist of rice on my sister-in-law’s (Priya) head for the 5th or 6th time as the priest, on the right side, recites a puja. The guy holding the rice plate, in the middle, is the priests helper. He’s also a priest, just not the main guy. He is sort of like the runner if we were to say the priest is the chef. This guy is throwing rice, handing fruit to people, lighting fires, handling the ghee and basically reacting to the needs of the priest and the puja he is reciting. 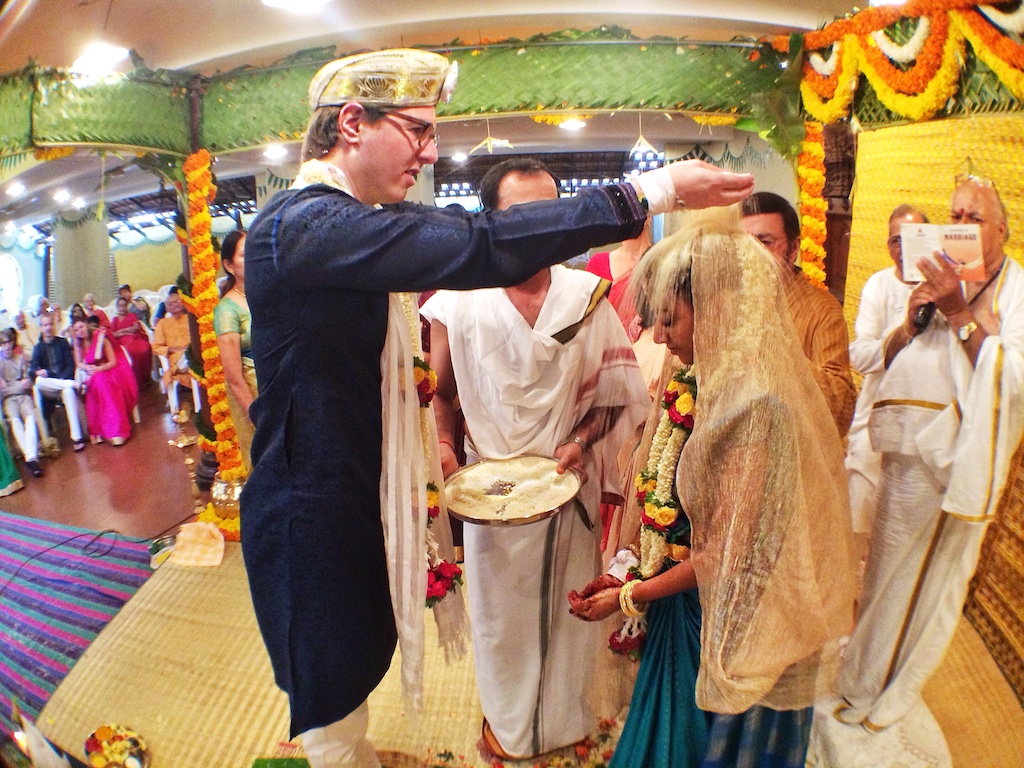 Needless to say, but in tying in again to my love of this ceremony, food is front and center. From this point to the end of the temple ceremony food was at every turn. Once the priest gets through most of the pujas it’s time for Dhare Herdu, where the bride’s parents give away her daughter to the groom. Then the whole congregation gets a go at it. Definitely one of the most fun parts of the whole ceremony. Each guest takes turns blessing the coconut by pouring water through their hands onto the coconut and then onto the bride and grooms hands. This little clip gives you an idea of how this goes.

Once all the pujas and religious rituals are through then the social rituals start. Namely, every family MUST go up for a picture with the bride and groom. Remember we’re talking 200 to 3000 guests. I’ll let you do the math on how many pictures that equals. Instead of a “receiving line” they have a full on photo studio line. Thankfully this is the same time lunch begins. The meals at Indian wedding are epic and masters of efficiency. Imagine feeding 3000 people in an hour and a half. You need a system. We only had about 200 people but that is still a whole lot of mouths to feed for two meals.

Before we get to the tasty and the reveal of the way it’s served, let’s back up to the beginning and the arrival. It all started with that coconut I said we poured water on a few paragraphs ago. Some chimes, a horn, a saxophone in the background, some circling, flower throwing and of course the offerings. 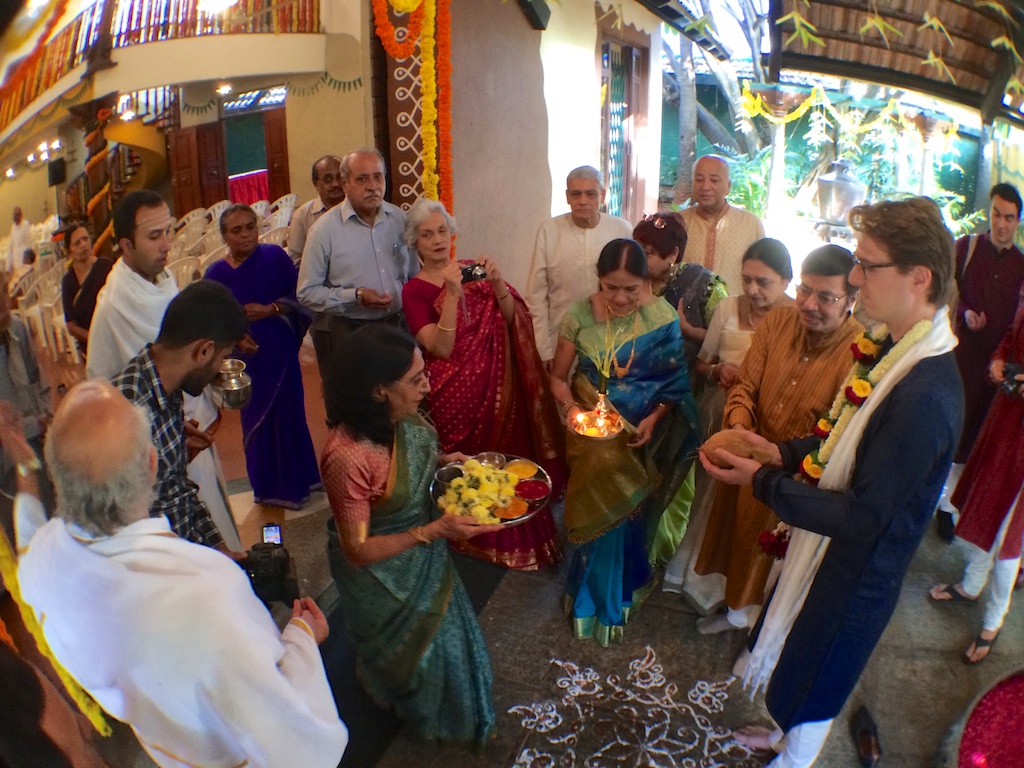 After this ritual we went right into breakfast. Bob and I, still side-by-side since we arrived at the temple, were shown to the large room adjacent to the main temple room. Rows of tables and chairs were set up to feed all the guests. With the bride hidden and still waiting to be “presented” we sat for our first meal of the ceremony. A line of food bucket toting, hair net wearing, shoeless servers emerged in formation. Each one had a component to the breakfast. Some had the whole dish in the case of the top image of medu vada, a crisp doughnuts made with a spiced lentil batter. It’s made by soaking split urid lentils and spicing them up with cumin and fresh green chillies. Very first class. Thanks for the slang Wilbur Superstar. Other dishes came in a two or even three server series like the idli, a steamed rice cake. The first guy put down the idli and the next two dispensed two different chutneys. This continued until the entire banana leaf, the perfect and traditional plate, was almost full.

The same efficient taste parade ensued at lunch. Lunch was even more top notch than breakfast. More options, more sauces, more everything including my favorite, the masrana, a cooked but cool yogurt rice. I should mention, this being South Indian, Hindu and inside a temple, ALL the food was vegetarian. You might be saying, “Wait, what about the butter chicken?” First off that’s from the north. Second, In a temple you’ll never find meat let alone at a wedding. Unless you’re Sikh and that’s a whole other set of rules and wedding for that matter. Still no meat in the temple though. EVER. If I ever attend one I’ll be sure to tell the tale. 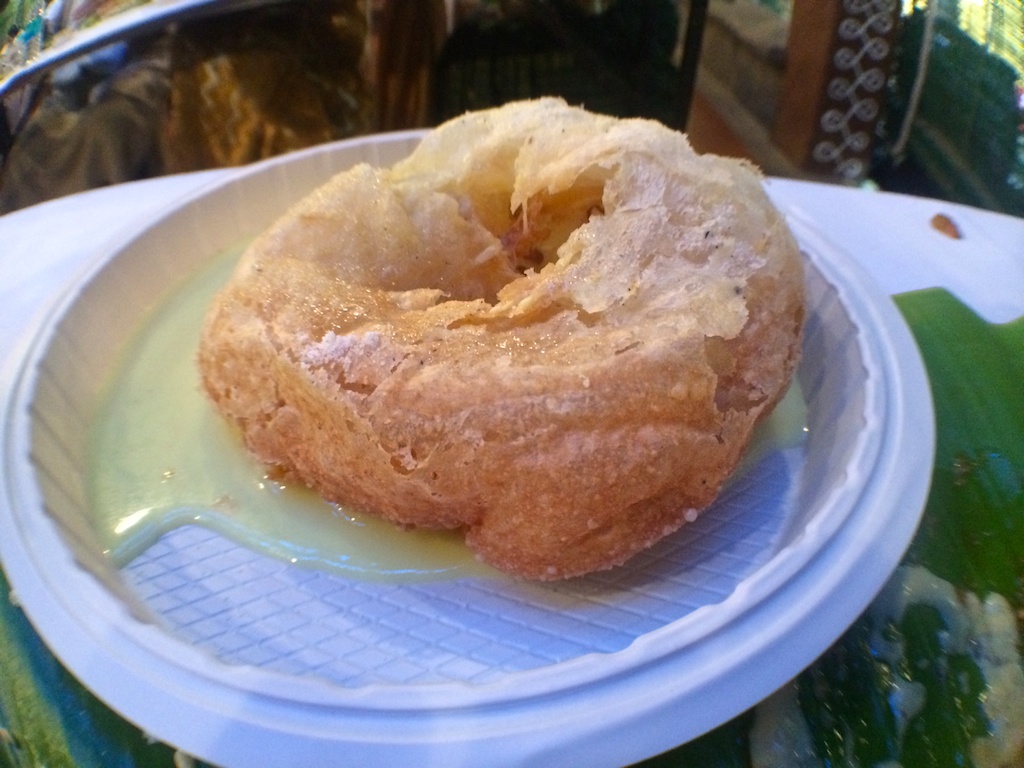 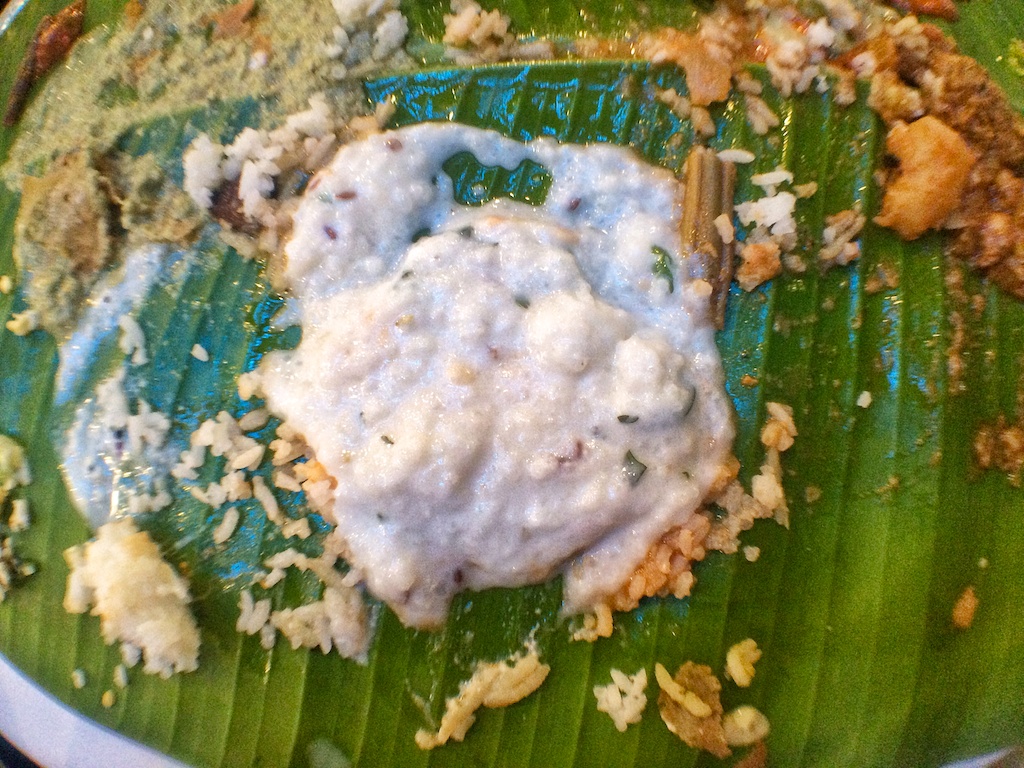 After all the religious, social and gastronomic rituals were completed my watch clocked us in around six hours and we had not even started the party yet. This was a fantastic day and held many, many moments I will cherish for ever. I’ll leave you with one of them as a closing shot. Here, my father-in-law is placing a turbine on Bob’s head while my uncle holds a white umbrella and the priest apprentice looks on with unknown concern. Fantastic. 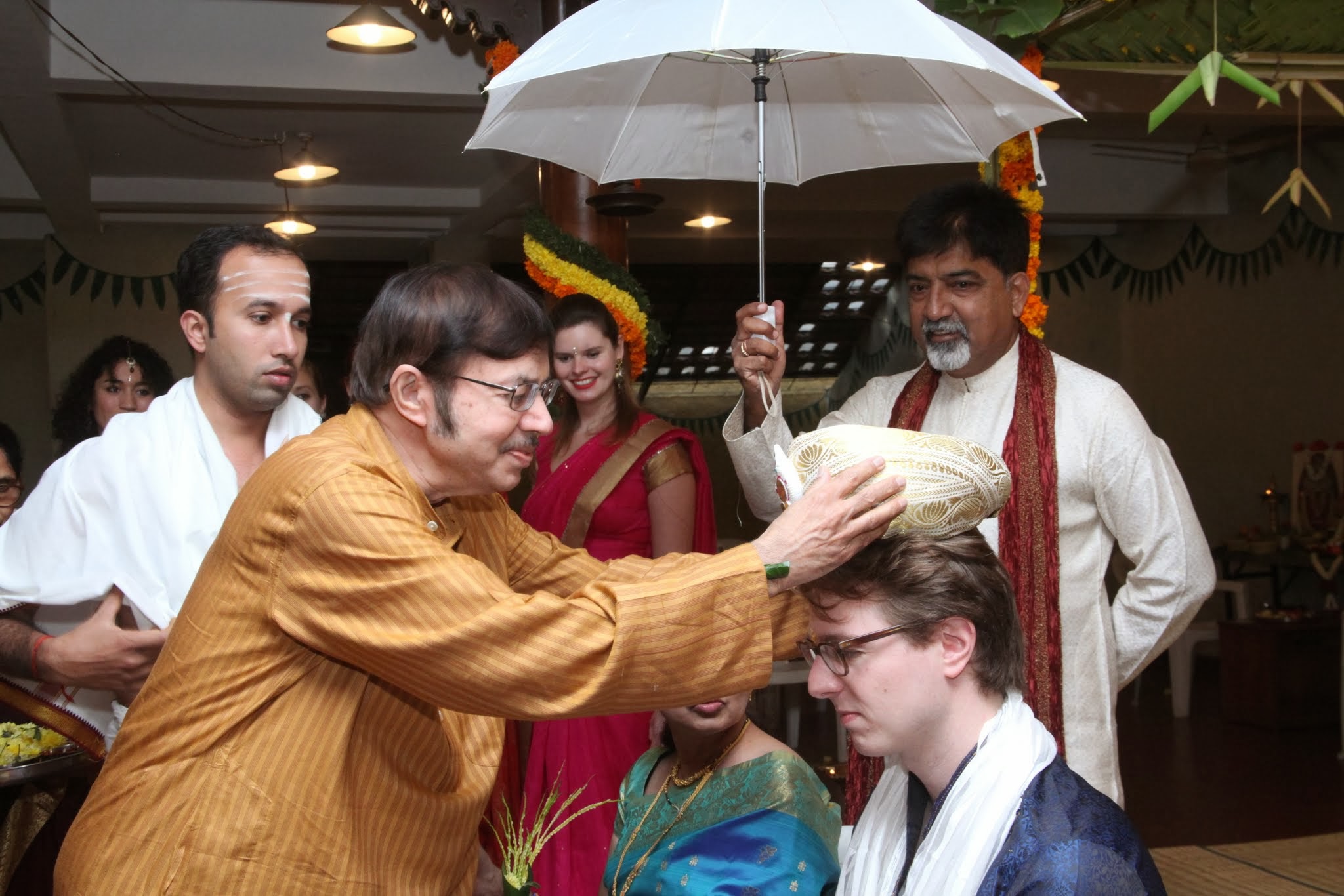 Lunch In A Whore House