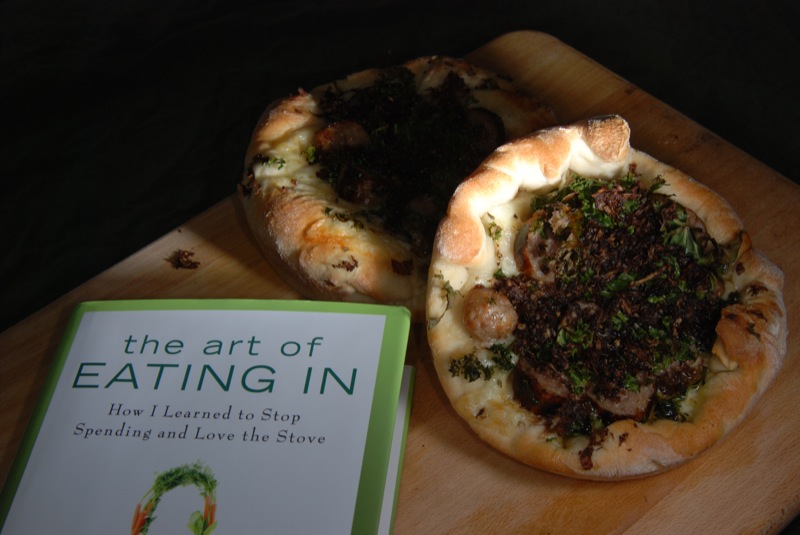 I met Cathy last year at SXSW in Austin. She was speaking on a panel about how to be a successful food blogger. Interestingly enough, this was before Forking Tasty had launched. After the session I went up to introduce myself because I loved her blog, we had a mutual friend and we called the same borough home. Since that moment last March I have competed against her, cooked with her and ate next to her on various occasions.

Last week an advanced copy of her book arrived at my door. Her blog, Not Eating Out In New York, had been translated into a memoir/cookbook of her two years not eating in restaurants. How she did this I am still not sure. Even as an avid reader of her blog and 7 chapters into her book, The Art of Eating In, I still can’t believe her discipline.

With inspiration from chapter 7, (Not ordering in: less haste, less waste) I attempted a recipe from the end of the chapter. In this chapter Cathy mentions the 45 billion disposable chopsticks used once and discarded every year. This is a gross travesty and the same forest raping, landfill filling disaster the pizza box produces. Because of that I decided to make her kale, radicchio and sausage pizza and do my part to keep one more used pizza box off of Staten Island.

My trepidation of buying the dough from my local pizza shop and attempting to recreate that famous NY slice was a little less than Cathy’s. I thank the vowel at the end of my name for that. Although I had made pizza many times before I had never thought to top it with kale or radicchio. I opted for mini pies since I have not used my mini-pizza pans in over a year. Usually, a single use item like this would find its way out of my kitchen and into the salvation army box but for some reason these pizza pans I have always hung onto. After digging deep into the seldom-used-kitchen-tool drawer and extracting the pans, I got to the fun stuff, stretching the dough. I love the throwing, spinning and stretching part of making pizza. My mother would argue this is because I LOVE to make a mess in the kitchen. Secretly she is right. It shows accomplishment and good work ethic.

On went the toppings that I prepped before stretching the dough and into the pre-heated 400 degree oven slide my pies. In the 20 minutes it took for these bad boys to bake I chose a delicious meritage from my wine storage and cracked it open to breath. The alarm on my kitchen timer rang and I pulled the fragrant and crispy pies from the oven. The pizza cutter sliced through the pies releasing echos of breaking crust and smells of Italian sausage and greens through my apartment. A quick drizzle of extremely good olive oil was my final touch. With my pizza hot and wine opened up, I sat down at the table and started into chapter 8. Both the pizza and the book were outstanding. Thanks Cathy.

For the full recipe and the rest of Cathy’s story of not eating out in New York pick up her book.