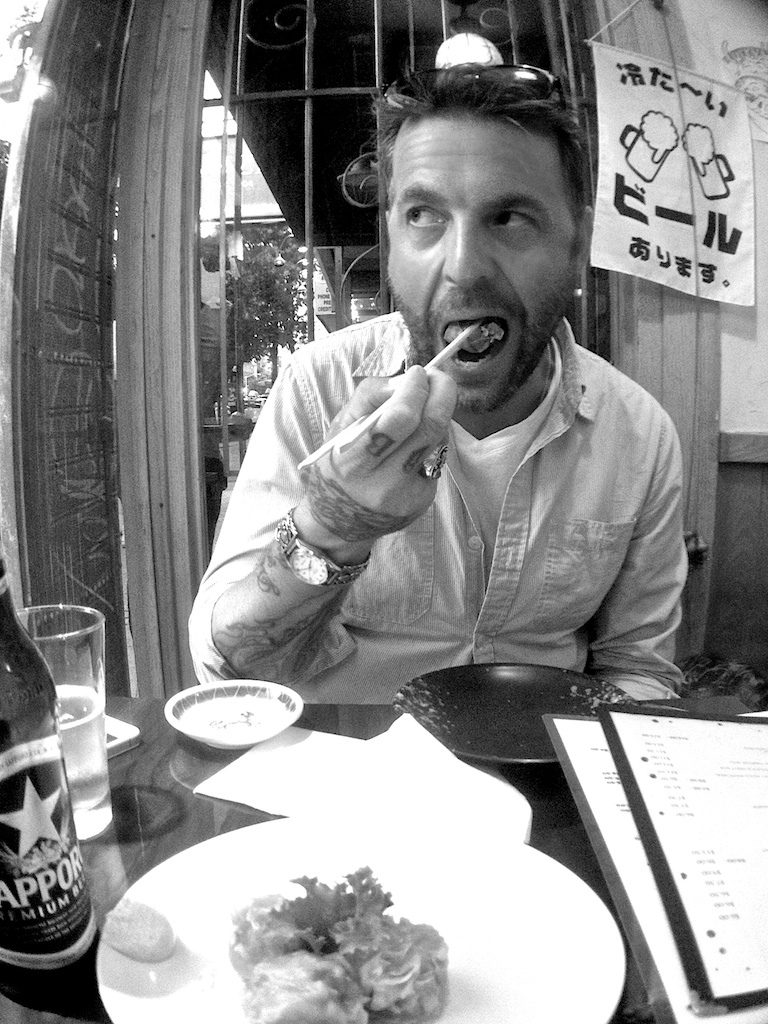 Wyatt Neumann’s mold was shattered when his jewish parents gave birth to him on Native American soil. To know Wyatt would be to understand how this is simply par for the course. His skin, garb and stride exude badass cool but his heart is as tender as the filet mignon he doesn’t necessarily find exciting to eat. His food habits are more for fuel than enjoyment. On the contrary, the conversation had over that food is of paramount interest to him. He’s a true explorer. He soaks in every moment making the best of the precious seconds he’s granted on earth. I admire his way. It’s brash, avante guard, conceited at times but with purpose…and ALWAYS with passion.

These days, his kids and wife are his world and he’s one of the best father’s I know. His creative energy has turned to focus on them as his muse. The result is amazing with his soft, tender, caring heart clearly visible through his seemingly contrasting photography. More than a quick glance reveals my point.

Oddly, I still think of my mom standing on out porch in Montana on those warm summer nights, yelling for me and my sister to come home for dinner. Like a scene from a movie, I’ll never forget that.

Eating fish heads and squid eyeballs from a cart under an overpass in Bangkok, Thailand. Apparently, this cart, and the chef, was renowned city wide and people would travel from all corners to eat his delicacies. (I thought it was gross, but ate it anyway)

Living? If I could have one last meal with someone it would probably be Edward Snowden. I’m interested in what that guy has to say. On a less political note, I’d probably go with Gregory Crewdson.

I was raised in Montana, so I have a weakness for meat-and-potatoes type meals. Generally you can’t go wrong serving me a bison burger and a beer.

Fish heads. Weird consistencies don’t sit well… I have a funny story about that actually. I was in Norway a couple years ago and was a guest to a very exclusive restaurant on an island. We were taken there by private boat and were greeted by the owner. Their specialties are all fresh seafood, that the kitchen staff (and the owner himself) dives for on the spot.

Anyway, he was shucking live oysters and telling us about food and the delicacy of oysters, and why they should never be eaten with horse radish or oils or sauces. He explained how oysters are hard for people to understand as food, because they go against what we understand about food. He told us how, back when we were hunter/gatherers and cavemen, one of our first instincts about prey was, “does it LOOK like food?” And of course, oysters do not. They look like rocks. The next was, “does it SMELL like food?” And, as we all know, oysters do not. Then we ask ourselves, “does it FEEL like food?” And , no the natural oyster’s consistency is not what we understand to be food, or food like. And finally, we ask, “does it TASTE like food?” At this point he explained that most people cover the oysters natural taste with sauces and spices and swallow them down whole. He said that was not the way to enjoy the oyster, but rather that you must eat it raw and chew it up, letting the natural flavors develop against your palate, and that the full flavor cannot be realized unless this is done. Patiently, and with purpose.

At this point, he invited anyone up to try a fresh oyster, given this new approach. I, of course, volunteered (famously hating oysters, but up for anything). I took the oyster in my mouth and began chewing, searching for the magical, unrealized flavor explosion that awaited… Chewing and chewing, it suddenly hit me: oysters taste like oysters and I still didn’t like them. I politely swallowed, looked to the owner, who was looking at me with the excitement of a young child and I simply said…. “nope!”

We all laughed and that was that.

New York City, which is an easy answer because it has everything. Except chains, really. Unless you go to Times Square.

I have never, ever thought of that… Um… I guess I would want to be an elk steak. That way I could live my life traversing the mountains alone, being all majestic and shit before getting shot humanely and becoming a kick ass dinner for someone and their family.

I don’t believe in making that decision. However, if I were forced to choose, I would say eggs… but I wouldn’t mean it.

My wife and two kids.

We met at an East Village main stay, Sapporo East, as each of us have a solid history in the ‘hood. On the order was a solid mix from every page. Tuna steak, some shumi, a fried chicken roll, a bowl of udon, mixed sashimi, a yellowtail roll and a sapporo roll. All washed down with a shared duo of ice cold Sapporos.

Remembering BA. Or, at least trying to.