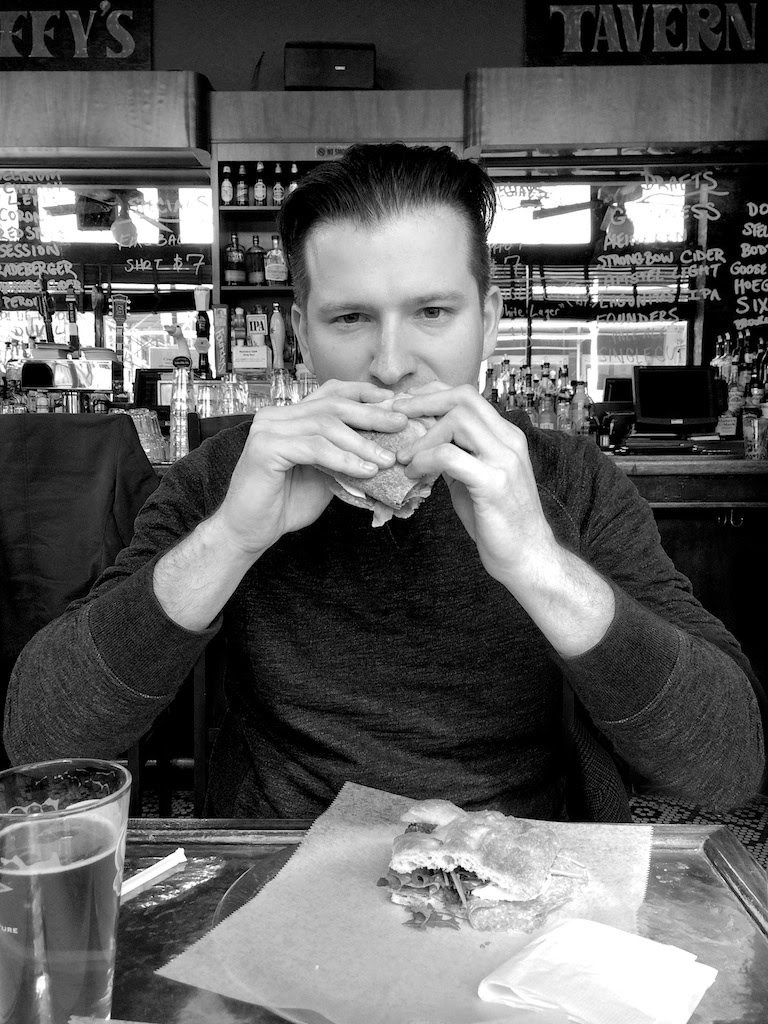 I first met Doug because he produced a project called LVHRD. Introduced to the idea through a conference he spoke at, I made it my mission to meet him and pick his brain about the invite only, random gathering, collective he dubbed LVHRD. I was fascinated by the idea that like minded people would gather just hours after receiving a text message announcing an event. The part that really got me was, the text went out to specific parts of the LVHRD email list (not the whole list at once). It was simple, brilliant and the inspiration to how I curated my Forking Tasty Suppers list. I’ve come to know Doug well over the years. From his agency days, to our entrepreneurial brainstorm lunches to his current content business, he’s always been ripe with one thing, ideas. He’s a fast thinker producing quality ideas around topics that range from the serious to the silly. His knack for championing a good idea and trying to make it great has always been my favorite trait of his. Like a restless dog hunting an elusive fox, when he picks up a scent he leaves no stone unturned. That’s made him quite successful and a pioneer of not only ideas, BUT entire industries. Doug recently took me to Puffy’s Tavern, a sandwich shop I bashfully say, never made it on my radar. Here’s what he had to say about fish, learning to cook and being a NYC fan.

What do you think when I say dinnertime?

Playing video games in the den of my childhood home, with fragrant whiffs of chicken cutlet parmigiana in the air, with the ambient sounds of pots clinking, pans and cabinets opening and closing.  I hear the words “dinner time” screamed from my mothers lungs. At that point my lips smack together anticipating the cheese wiz macaroni and cheese that will mask the taste of the broccoli, the video game would be reluctantly paused, as I dashed to the table nearly slipping on the polished linoleum floor in my socked feet.

My first favorite meal memory, is when I was a senior in college, and I was learning to cook for myself, just before the internet really existed and was a flood with recipes.  I was cooking a dish that mom taught me, which was “caesar salad chicken” with Romaine Lettuce. I could remember calling her, after each step, wondering if I was doing it right. For about two years that was the only thing I attempted to cook.  I haven’t cooked that dish in a while, but will try it again soon.

I am really not that sentimental a person, I would probably like to eat with a complete stranger.  I really enjoy meeting new people, with undiscovered perspective, often less interested in those that are already famous, but possibly will be. Or with everyone I ever met at one long table.

I love mostly all food, as long as it will fit in my mouth. Meats, Cheeses, Avocados, Pickles, Sauces, things that are spicy, salty, wet, chewy. Now that it is spring, I have been craving BLTs or BLTAs and Lobster Rolls. Not sure why it’s just how I am feeling right now.

Despite it’s nutritional value, I have limited spectrum when it comes to fish. Somehow if fish smells fishy, it turns my stomach. Back when I worked at JWT and TBWA, I would fly to Europe a lot, often hung over from the previous evenings client entertaining, and would be sitting in a business class seat, often in turbulent weather, with the breakfast offering of a not so fresh smoked salmon breakfast salad.  The trifecta of hungover, bumpy ride, and slightly not so fresh fish has me a little soft on fish.

I am kind of a fan of new york, ny.  There is a high density of people here that really care about food. And people from around the world bring their cuisine here, to become part of the mix.

I was sorta stumped on this one, so I took an online quiz to help me.  I would be Ice Cream, You’re cool when danger comes around, but you love having your friends over.

I really love them both.Eggs are great in omelet form, with onions, hot sauce, and available cheeses and meats. Pancakes are best with Chocolate chips, blue berries or both. I also like pancakes in waffle form too.

Last night Sloan and I had dinner with Leland Rechis, Leland was my RA in college. Leland is a product manager/designer that has been part of some of the most interesting tech companies…. Google, Twitter, Etsy, Kickstarter. Leland has a unique background in that he understands hardware, software, and infrastructure with a lot of team management experience.  We try to catch up about life, work, and everything else that is new york. We had a great dinner at Jack the Horse in Brooklyn Heights.

Dinnertime is usually 6,7,8,9,10,11, or 11:30 but rarely 12. I would categorize it as a non-standing meal with friends, family, business associates. It is a warm safe feeling, that is often surrounded with pleasant conversation, good tastes, and liquid beverages.

Doug took me to Puffy’s Tavern, a Tribeca mainstay since the ’40’s. Like I said, somehow, I missed this shop. Doug kindly walked me through the ordering “deal”. The biggest choice, your bread. I went with the same as he did, his “usual”, on pizza bianca bread (foccacia) is the Fillini. A sopressata, fresh mozzarella, arugola and hot peppers mix heartily stacked between two pieces of their in house made bread. Once again, Doug had the right idea.