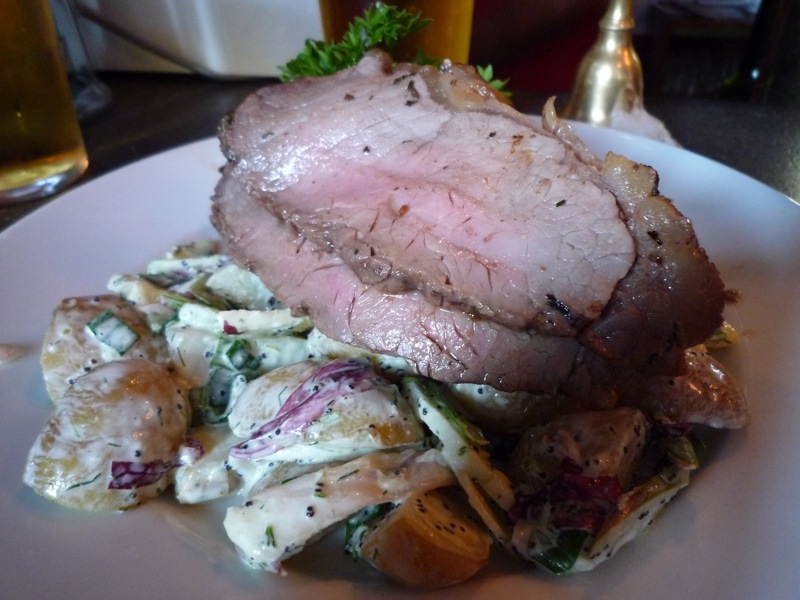 On the same day I met Stig and his Olives I took the Copenhagen guys out for dinner. Their choice of course. Henrik took us over to a restaurant/bar that lived in a converted laundromat space. As soon as we walked in Henrik ordered up three plates and some beers.

When the meal came it looked deliciously Danish. A heaping mound of the best potato salad I have ever had was topped with some hot, fresh, rare, roast beef. The salad was cool with a great balance of red onion, dill, butcher ground pepper and homemade mayonnaise. I savored ever bite while sipping liberally on a Danish microbrew. When the plates were clean we ordered another round of beers and Henrik took the liberty of ordering a round of shots. The shots were of the local Danish kind(actually Italian). I can not remember what it was called but it had a dark color and a burnt wine, licorace-ish taste. After our second shot Mikael smartly left us and headed home to his family. Henrik and I stayed and kept our drink on.

Typically this post would now be over. But, I have to keep going for two reasons. First, you rarely have nights like what will follow in your life. Second, I had a gps enabled, picture taking bike with me. That makes for a great photo stream of the night. So, here it is. It started with Henrik and I making friends with Louise, Tina and Mette at the landro-bar-aurant. We played a little game called listen to my soul with a pair of headphones and a make shift earplug. Soon after, Stig (yes, the olive guy) showed up and jumped behind the bar treating us all to shots.

The spot called last call and we all poured out into the now dark streets. Remember Copenhagen stays light until about 10:30pm. It is probably about 12am at this point and Tina has a new party for us to hit. Catch is, it is all the way across down in Christiania. Henrik is skeptical, I am pretty drunk and we are riding our bikes to the party. How else would we get around in Copenhagen? I have to say it made me feel like I was 15 again. I loved riding all over town from party to party. 20 minutes later we had crossed two rivers and made it to the back ally, lake front party in Christiania. Christania is known for its bohemian, idealistic, drug pushing citizens. We walked ourselves into an outdoor, underground party with a DJ booth floating in the lake and tunes that ran the gamut from 80’s USA to Danish rap. The best way for me to explain why this guy is in the water, who that beautiful Italian girl is and what happened to these 4 beers is to go to the video tape. The ride home was a bright and energizing ride through an ever quiet, still Copenhagen.

I got back to my hotel thanks to Louise’s door-to-door service and had about 3 hours to plop down in my pink room before checking out and heading off to London. One last thing. You might be wondering what the yBike saw through the course of the night. Well, here is his birds eye view.