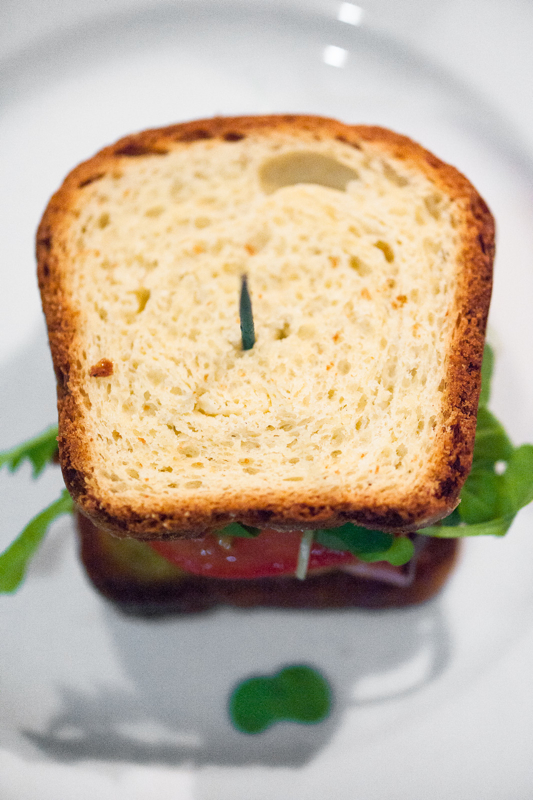 Our season opener was a hole-in-one but not without it’s series of sandtraps. The boys from Caddyshack graced the screen while Aimee and I did our best to whip up our fanciest country club fare amidst the formidable obstacles namely, mother nature.

For those who are unfamiliar with our dinners, Reel Tasty is Forking Tasty’s summer supper club where Aimee, my co-chef/host, and I screen a movie on a 2 story building while our guests sample some of our latest and tastiest gourmet dishes. This evening we decided to start the evening off with a sort of drunken Arnold Palmer. A little vodka, some Fresca and a few secret ingredients left us with an ice cold pitcher of fizzy, spiked, lemonade-iced tea-ish beverage that went faster than the Caddyshack gopher disappears down his hole. As prepping began inside, those sandtraps I mentioned earlier kept us guessing. The grey clouds overhead let on a sprinkle, then stopped, toying with our emotions as we wondered if our 20 guests would be soon be huddled around my coffee table. As prep began to heat up in the kitchen our guests were treated to a few snooty snacks. Radishes with bagna cauda butter and bacon marmalade palmiers were platted and served to compliment our wine choices. Usually Lily, of Dandelion Wines, picks out the grapes but I neglected calling her until the last minute in my pre-day prep. Luckily, Tom over an Dandelion picked up the slack and found two suitable bottles. The 2010 Vrac rose, if that doesn’t say midwest country club I don’t know what does, was a simple, fresh and fruity grenache syrah. The red on the other hand was a big, powerful Cabernet Sauvignon that is hugely flavorful, and studded with notes of licorice. The craziest part of this 2008 Tortoise Creek Cab was that the finish had a smoky flavor that I could swear reminded me of a hickory wood BBQ pit.

Soon after the drunken pro golfer pitcher was drained and the palmiers were reduced to crumbs we marched out our three appetizers. First up to compliment the red, smoked trout devilled eggs. Any smoked fish immediately says country club in case you were wondering the tie in. Next was a warm asparagus soup with lemon oil and sourdough croutons because asparagus is in season and Aimee makes amazing soups. Finally, you can’t have country club kitsch without a club sandwich. Ours was a foie gras BLT on fresh baked, then toasted, brioche. As our guests snacked through appetizers and warmed up to each other we realized we had gathered a nice crowd based on their chatter, dismisal of a few rain drops and desire to capture every course and moment on film (pixels). The rain had finally seemed to give us a break and we finished up setting the table for our 20 guests. This was our first 20 guest table, up from 16 last season, and the extra 4 seats were an exciting addition for us.

About 20 minutes later the entrees were being finished up, the sun was doing the same and our guests had found a seat at our extra long dinner table. We paraded out the entrees with stories and explanations, as usual, to our waiting new friends. Starting with a heaping bowl of roasted broccoli dusted with fresh mint we moved through the dishes. Israeli couscous with roasted asparagus tips made its debut because of that ever so fresh, in season, asparagus. Dialing up the country club vibe once again we finally presented the surf and turf. We liked the idea of Lobster but thought that it was too fancy for the Caddyshack style club so we used it as an opportunity to introduce our favorite lobster substitute. Our poor man’s lobster rolls were roasted, chilled, monkfish with a vinegar/mayo based sauce. To anchor the entrees we chose filet mignon. More accurately we tied off 4 beef tenderloins and grilled them to perfection with a quick finish in the oven to get that desired medium rare center. Sliced in 2 inch thick medallions we served this with honey rhubarb chutney, another in season veggie that called our name while we strolled through the farmers market during our pre meal shopping. As the table ate up we retired briefly into the kitchen and contemplated the next course. A little surprise each dinner is the popcorn. We never tell our guests it’s on the menu and we never decide the flavor ahead of time. It’s a little creative game Aimee and I get to play in the middle of “service” that keeps us on our toes. What popcorn goes with Caddyshack and country club kitsch? The movie soon lit up the deck and our guests attention turned towards the back of the deck. We decided on a duck fat, truffle salt popcorn. Basically putting every over the top indulgence in one bag. As the movie came to a close there was one more surprise from the kitchen. Twenty “Baby Ruth” brownies with whipped cream and a quick caramel sauce were spread out down the long table. If you don’t get the Baby Ruth joke I won’t spoil it but let’s just say it was a culinary risk using that ingredient. The brownie was followed by a scoop of fresh cut wheatgrass ice cream to brighten up the palate and conclude the evening. Of course no recap is complete with out recipes and a shout out to the crew. The crew is what makes these nights possible. Kumiko not only rode her bike from midtown Manhattan to our deck but rode it home after standing strong at the sink for 3 plus hours. She is a true gem that was a big part of our success. Of course we also have to thank mother nature for keeping us on our toes and ultimately keeping us dry.

The biggest thanks, as always, goes to everyone who attended. You guys are the best. Our next dinner is July 16th. Hope to see you all soon.

Ingredients:
Monkfish
Green Onions
Mayonaise
Cider vinegar
Small rolls
Garlic
Tarragon
Butter
Salt and pepper
Directions:
1. Lightly salt and pepper the monkfish
2. Roast in a 375 degree oven for 15-20 minutes
3. Remove from oven and let cool
4. In a small bowl mix cider vinegar and mayonaise until you get the desired consistancy.
5. When fish is cool chop into small bits and mix into dressing
6. Chill for 3-4 hours
7. Chop tarragon and garlic mix into melted butter
8. Brush both sides of the rioll with butter mixture and grill for 2 minutes
9. Remove from grill and sprinkle with more tarragon
10. Place a table spoon of monkfish on the roll and serve

Ingredients:
Israeli couscous
Asparagus
Canned cherry tomatoes
Majool dates
Balsamic vinegar
Olive oil
Salt and Pepper
Mustard
Directions:
1. Cut asparagus and roast in a 375 degree oven for 10-15 minutes
2. Cook couscous according to package direction. Use vegetable stock to replace half the water
3. drain if necessary and mix in olive oil
4. chop mejool dates. crush cherry tomatoes and remove some of the seeds
5. Reduce balsamic vinegar down to a syrup
6. Mix balsamic with mustard and olive oil. Be sure to taste so you know you are happy with the mixture balance.
7. pour dressinga nd remaining ingredients over couscous. Mix well.
8. Serve at room tempurature