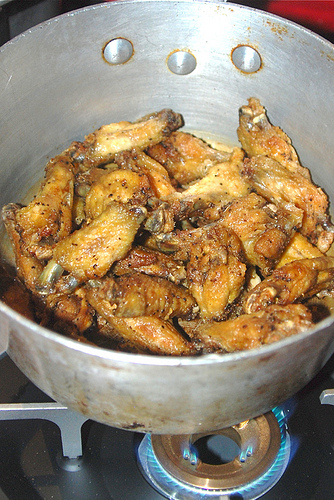 This past Saturday the second annual Best Wings in Brooklyn competition was hosted by Red Star Bar. It was a lot of fun. Jay and I rolled up around 1 pm, an hour before the chicken wing tasting began. Before we get into the lay of the land, the competitors and the wings, let’s cut right to the chase. Our winners. Both Jay and I were tied between the delicious Bean Post Pub and the spicy sweet Red Star Bar wing. Yes, we know neither of these won, or placed. We could care less. Here is why they are winners in our book. After filling our stomachs with wing after wing we narrowed it down to three finalists, Red Star Bar, Buffalo Boss and Bean Post Pub. All were totally different from the other. I ran back into the crowd to get another sample of the three wings to help our decision. Lets face it we really wanted more of those wings. This was a hard decision but Jay and I agreed we could not decide because of the total difference in the wings. We called it a tie between Red Star Bar and Bean Post Pub. Red Star Bar was a good size wing, crispy on the outside with a sweet sauce and sesame seeds on top. Bean Post Pub had a honey bourbon sauce and was very tender. Fall off the bone tender. A close third for me was Buffalo Boss. It had smaller wings but had a great spice on them that I could not put my finger on.

As you know from last year I loved Anthony and Christine’s wings. This year they came back with an expansive 21 different flavors. a whole column containing alcohol. OMG, Amazing! Of course they couldn’t enter with 21 flavors so they held their own contest down in Bay Ridge a few weeks earlier to choose the wing that would make it to the competition. The Honey-Bourbon BBQ made it to the competition. This wing was big and wet. As they explain it BBQ & Honey with just the right extra kick supplied from Wild Turkey’s American Honey Bourbon! I need not say more but I will. They were hot and tender inside. The sauce stuck to your fingers lips and most importantly the wing giving every bite a taste explosion.

But we were torn. Last year I was not a fan of Red Stars wings but this year under Walter Donadio’s care their wings have been completely revamped. Presentation was beautiful with each wing getting it’s own blue cheese cap and a rain bath of sesame seeds. I am fortunate to live only 2 blocks from Red Star but I have been deceived for some time. When ordering my wings I always skipped the raspberry BBQ wing. I tend to shy away from the raspberry thing. It doesn’t matter if it’s a vinaigrette or a BBQ sauce. I have been a fool. These wings have a spicy bang that finishes with just a touch of sweet from the raspberry. Walter puts a crispy skin on these bad boys before he dips them in sauce giving your mouth a texture and taste dance with every bite.

You can see how this was too close to call a winner. They are drastically different wings but both amazing in their own right.

Now that that’s out of the way let’s paint the rest of the picture. Walking around the bar and seeing the set up of about 10 stations of wings was very exciting. There was a line forming outside as we walked in. Before the challenge began we met a five foot chicken, a couple of the chefs and The Ultimate Wingman. Even Brooklyn Borough President Marty Markowitz had a few words to say. There were many wing types. From traditional wings to stuffed wings to alcohol drenched wings. Here were the competitors: It got really crowded really fast as it should when there are free wings to be had. Jay and I went from table to table tasting away. Trying to eat chicken wings standing up with a crowed around you was no easy task. Lets just say things got a bit messy. That is to be expected at a wing off. There was a panel of judges to try each wing and make an over all decision who would win this years Best Wings in Brooklyn competition. Jay and I had already made our decision. However, the true champion was awarded at the judge’s table.. And the winner was…… Life Café. Not the Forking Tasty choice but a dam good wing.

We left Red Star Bar with full stomachs, smiles on our faces and chicken wing sauce stained cheeks only to witness the line of people waiting to get in. It stretched all the way down the block quadrupling the size of last year’s line. I wonder if those people on the end ever got in to taste any wings. Oh well, I’m looking forward to next year’s competition.