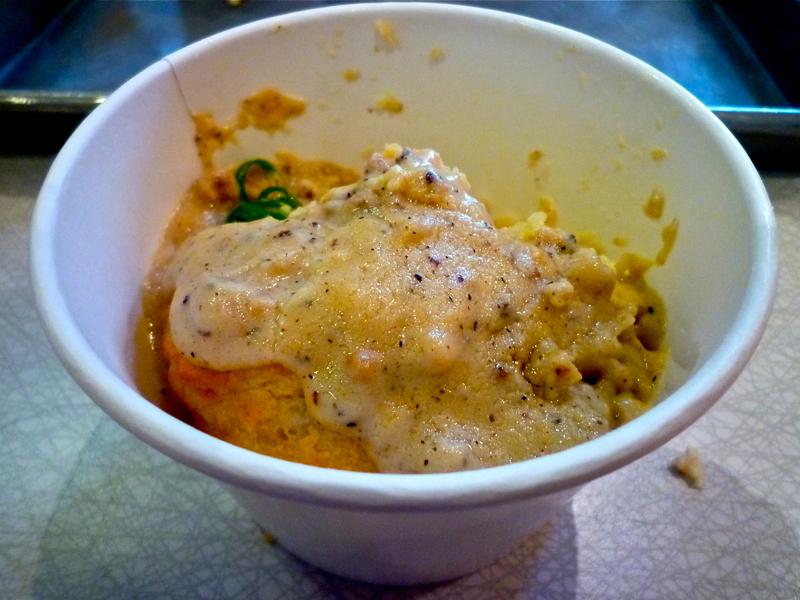 Not exactly. I just couldn’t bring myself to whack down a chicken and waffles plate at 9am on a Thursday. Although the rainy New York morning gave me a good excuse, the Bikram Yoga class planned for tonight won the short synapse battle. There could be nothing worse than trying to sweat out molasses and waffle while in standing-head-to-knee pose. What I opted for instead was more of a breakfast than the aforementioned dinner-breakie mash up. Above is the Eggs Armadillo, a poached egg on top of a buttermilk biscuit, covered in sausage gravy. It’s not exactly the morning fuel Slim Goodbody preached to me as a kid but pretty damn satisfying. It’s been a very quiet secret that I’ve been holding lunch meetings and late night snack fixes at the 50’s style tables of Hill Country Chicken for the last 5 months. So, I am no stranger to the finer, fattier side of their menu. When they announced breakfast a few months ago I instantly started looking for the opportunity to blow up the morning with some of their delights. The menu fills out well with fatty pastries, donuts and a set of sides that could outshine your main event. Take a peek and schedule a visit. I’ll most likely be at the back table holding a leg.

Costco is my new butcher